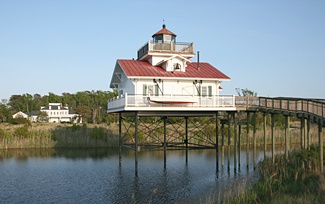 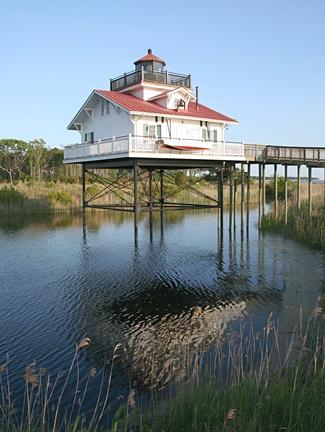 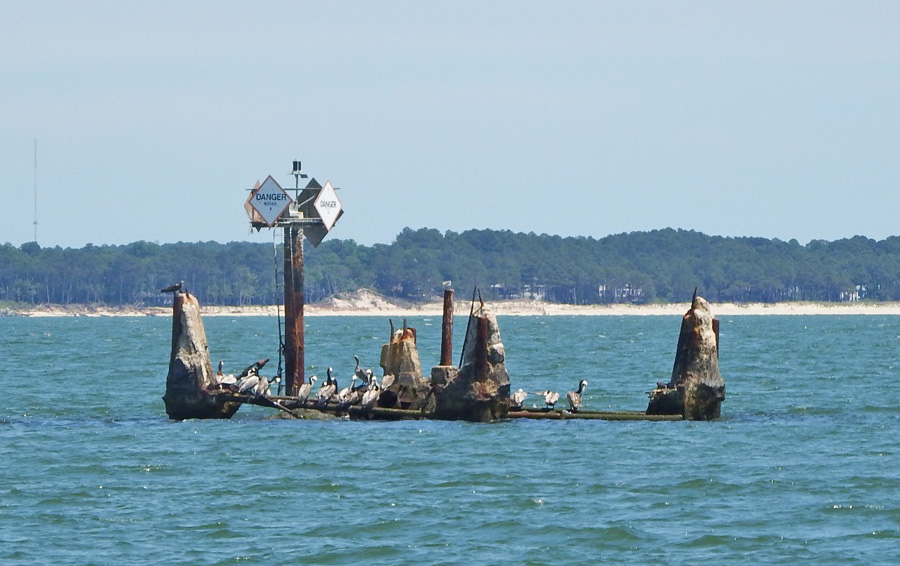 Old Plantation Flats is a shoal that parallels the eastern shore of Chesapeake Bay, just north of its entrance and about two miles offshore from Old Plantation Creek. Congress made an appropriation on March 3, 1885 for a screwpile lighthouse to mark the flats, and construction by contract of the metalwork began in November of that year and was finished the following March. Framing the superstructure commenced at the Lighthouse Services Lazaretto Depot near Baltimore in April 1886 and was completed in June. The lighthouse tender Jessamine, loaded with the foundation ironwork, left Baltimore on July 7, 1886 for Old Plantation Flats, and a working platform was established at the site between July 9 and July 12. The first screwpile was put in place on July 13, but due to stormy weather and the extremely firm character of the shoal, the fifth and final one was not finished until July 21. After the braces, beams of the foundation, and first-floor joists were placed on the foundation, the tender sailed to Baltimore for the superstructure and returned with it on July 29. The lighthouse was in position and painted by the end of August, allowing the light to be lit for the first time on September 5, as published in the notice to mariners. Resting on five piles, the twenty-eight-foot-square lighthouse exhibited a fixed, white light from a fourth-order Fresnel lens, with a red sector covering the Inner Middle Ground and Middle Ground Shoals.

The lighthouse had a sitting room, bedroom, kitchen, and storeroom on the main floor and a privy was cantilevered off the east side of the main deck. The stations fog bell, tolled by Stevens striking machinery, was hung in the dormer window on the south side of the structures pitched roof.

Leonard F. Godwin served as the first keeper at Old Plantation Flats Lighthouse, earning an annual salary of $540, while Laban T. Lewis was paid $420 as the assistant keeper. With the cramped conditions at the lighthouse, it isnt surprising that there was a rapid turnover in keepers. In its first sixteen years, the lighthouse had nine head keepers and seventeen assistant keepers. The longest tenure for a head keeper was Charles E. Kirwan, who served form 1895 to 1907.

On January 21, 1893, the shock of an ice floe striking the lighthouse sent the Fresnel lens crashing to the lantern room floor. Fearing for his own safety, Keeper William Gunter sent the following telegram to Yates Sterling, the district inspector: Last night, twenty minutes after one, the light fell from the stand and broke, the tanks have started off. I fastened them best I could. House near wrecked, what shall I do? Gunter was allowed to leave the station, and the light did not return to service until February 3rd, when the lighthouse tender arrived with a spare fifth-order lens.

After Inspector Sterling learned that the lighthouse itself had suffered minimal damage, he asked for the resignation of Keeper Gunter, one of the few African Americans in the lighthouse service. In a letter to the Lighthouse Board, Sterling wrote:

The present condition of this station shows that the keeper sent to this office an incorrect and misleading dispatch by stating that the house was near wrecked, thus showing that he acted in panic. There is I think justification for his leaving the light, as he was entirely alone and, his lens being broken, he could not maintain a light.  But instead of remaining at Cape Charles City and returning to his light which he could have done in a few days, he went to his home in Eastville and could not be induced to return to this station until Ensign Maxwell went there and placed him in his house.

Gunter was dismissed along with his assistant, who was sick with pneumonia at the time of the incident but failed to find a substitute.

Just two years later, Keeper John Thomas almost waited too long to leave the station. A newspaper account in February 1895 recounted that Chesapeake Bay had frozen over from shore to shore and Keeper Thomas was removed from his post on a Friday nearly starved, having had nothing to eat since Monday.

To return the light to its original strength, the fourth-order lens from the old Hog Island Lighthouse was sent to Old Plantation Flats in 1897. In December 1906, a blower siren fog signal, which sounded six-second blasts separated by two-second silent intervals, was installed in the lighthouse

During the winter of 1917-1918, two of the stations five piles were broken by ice, but the dwelling remained intact, supported by the remaining three, badly twisted, piles. This photograph, taken on February 11, 1918, shows the station's broken northeast pile. To provide a more sure foundation, concrete footings and piers were placed beneath the lighthouse, and 4,600 tons of riprap were deposited in a pyramidal form at the cost of $37,140.30 to break up future fields of ice.

After the Coast Guard assumed control of the countrys navigational aids in 1939, four men were assigned to the lighthouse and rotated their duties such that at least two of them were always on station. Reggie Dyckman was one of the last coastguardsman to serve at Old Plantation Flats, and he maintains that it was his favorite post during his Coast Guard career. Of course at that time the lighthouse was equipped with electric generators, television, and other modern conveniences.

Old Plantation Flats Lighthouse, the last remaining manned lighthouse on the eastern side of Chesapeake Bay, was torn down in 1962 and replaced by an automatic pole light attached to the old lighthouses foundation. Today, the light flashes white every four seconds.

In the spring of 2004, Bay Creek Resort & Club built an exact replica of Old Plantation Flats Lighthouse in a man-made lake along the shores of Chesapeake Bay, just two miles from the original station. As the fourth-order lens removed from the lighthouse in 1962 could not be located, a replica along with a cast-iron pedestal were ordered from Artworks Florida. Other features of the lighthouse that are true to the original include a three-foot by six-foot redwood cistern for collecting water off the roof, a coal stove, and a fog bell and striking mechanism.

The project manager for constructing the lighthouse was given an unlimited budget, but when the work was done, he was informed that he had exceeded it.

In 2013, the replica lighthouse was awarded to Paul Galloway, one of the two men who developed Bay Creek, along with a cash payment of $450,000 as part of a tentative settlement between the resort and Galloway Corporation.

For a larger map of Old Plantation Flats (Replica) Lighthouse, click the lighthouse in the above map.

The replica of Old Plantation Flats Lighthouse is not open to the general public, and Bay Creek Resort, where it is located, is a gated community that does not welcome visitors. To reach Bay Creek Resort, travel north on Highway 13 for roughly thirteen miles from the northern end of the Chesapeake Bay Bridge-Tunnel, and then turn left onto Stone Road, where you will find the offices for Bay Creek Resort.