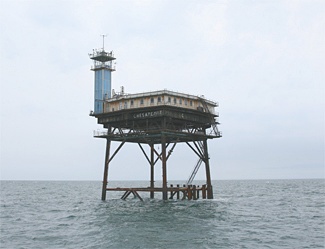 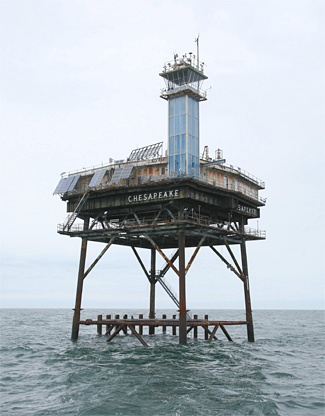 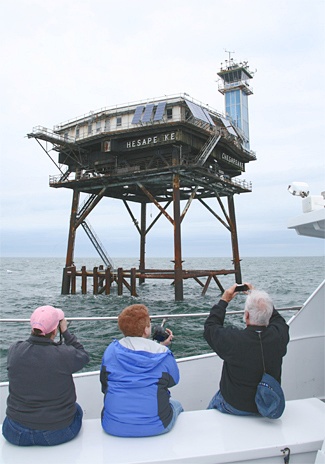 The first structure to mark the vitally important entrance to Chesapeake Bay was actually a steel lightship sheathed with a wooden hull. Known as No. 46, this vessel was specifically designed to endure the dramatic weather conditions that often prevail in the region. No. 46 was one of five lightships to serve at the station before the well-known LV-116, which today is a prized exhibit at Baltimore Maritime Museum.

The life of the 133-foot LV-116 began with its construction at Charleston, South Carolina in 1930. It cost $274,424 to build and, for its time, was a marvel of engineering. Its four 75-kilowatt diesel generators were a significant upgrade over the steam engines that were formerly placed in lightships. Made entirely of steel, LV-116 demonstrated exceptional stability, featured multiple signals to mark its station, and provided superb living conditions for the crew.

Perhaps the most important characteristic of the ship was its use of backups for critical systems. It possessed two 5,000-pound mushroom anchors, and the spare had to be used on at least three occasions when extreme storms broke the chain of the main anchor. Two of these storms occurred in the 1930s, and another in 1962, when a very large wave severely damaged the pilothouses forward bulkhead. The light system also had redundancy with a 13,000 candlepower electric lamp mounted on each mast. Other signaling devices included a foghorn, a fog bell on the main deck, and a radiobeacon.

The vessel was designed with a crew of sixteen in mind, though it was rarely at full capacity as crewmen rotated their shore leave. The enlisted personnel bunked in double rooms, and had their own mess hall and a galley with electricity. They also had the advantage of a refrigerator for their food, which was not a trivial feature circa 1930. The officers each had a private room next to their shared dining room, and the Captain was given a stateroom just in back of the pilothouse.

LV-116 started its service under the command of a Norwegian named Alexander Andersen. The vessels first station was off Fenwick Island in Delaware, so it was not known yet as Chesapeake but rather Fenwick. It only spent three years under that moniker, however, for in 1933 it was moved to Virginia to mark the entrance to the Bay. The crew mainly spent their time at routine tasks, including studies of the ocean and weather patterns. The monotony was occasionally broken by tempestuous weather, when the ship had to power its engine full-on into the gale to try to maintain a fixed position.

Massive changes to both the ship and its personnel took place with the onset of WWII in 1939. All the vessels under the jurisdiction of the Lighthouse Service were transferred to Coast Guard duty, and LV-116 was given the new designation WLV-538. The transition had an immediate impact on many seamen within the Lighthouse Service. Most pronouncedly, their pay was cut from $62.50 a month to the enlisted mans standard of $36.00. There was also the necessity of wearing uniforms and signing up for a long tour of duty of either three or six years. Facing these changes, numerous older veterans resigned from the service.

The implementation of Coast Guard management (and the departure of many old hands) led to a significant upgrade in education, training, equipment and efficiency on lightships. This was fortunate, because WLV-538 was soon given a gray coat of paint and a pair of 20 mm cannons and placed into naval wartime service. Its new assignment was to guard the entrance to the Cape Cod Canal near Sandwich, Massachusetts. At the conclusion of this service, it was painted bright red and returned to its Chesapeake location.

The lightship continued to mark the Bay entrance until 1965, when it was replaced with Chesapeake Light Station. This seacoast light is a Texas tower, resembling an oil drilling platform. The Coast Guard commented at the time that, reasons of economy and stability have dictated the replacement, but improved habitability is a factor which cannot be ignored. Besides being cheaper and more durable than the lightship, the tower could be manned by a crew of just six (with four coastguardsmen present and two on shore leave). The structure was prefabricated by the Tidewater Raymond Kiewit Company of Norfolk, which also did the work on the Chesapeake Bay Bridge Tunnel. The lighthouse pieces were transported to the site by barge, and were lifted into place with the help of a gigantic crane set in a platform embedded in the seafloor. The main structure stands seventy-five feet above the water, while the light itself is elevated an additional forty-two feet on an eleven-foot-square tower placed at one corner of the main deck.

Six bedrooms in the boxy dwelling provided each crewmember with private quarters. A newspaper article at the time lauded the crews remarkably spacious recreational area. The station also possessed oceanographic and radio rooms, a space for signaling and other equipment, and a large room that housed the generator. The platform had two levels below the main living and working deck. Immediately beneath the quarters was a fuel and water storage installation, and below that a twenty-five-foot fiberglass surfboat.

Located fourteen-and-a-half miles east of Cape Henry, the structure has the word CHESAPEAKE emblazoned on its sides and is primarily accessed by helicopter. The station is supported by corrosion-resistant steel pilings, which are set 180 feet into the seabed and filled with concrete. Boat hoists and boarding ladders on opposite sides of the platform provide an alternative to helicopter transport.

Like the lightship it replaced, the Texas tower was technologically ahead of its time. The Coast Guard described the primary light as a highly advanced engineering prototype, utilizing a glass tube filled with xenon gas This light had a range of sixteen miles, and had two settings: either 6,000,000 candlepower or a reduced intensity of 600,000 candlepower. It was noted that the xenon technology saved on electric power and used simple reflective arrays, rather than the expensive and fragile prismatic lenses employed by many beacons. Besides the light, the tower also possessed a fog signal that could be heard over ten miles and a radiobeacon that could broadcast over seventy miles.

In 1980, the Coast Guard commenced an ambitious, three-pronged phase of automation at the station. Phase one took place in the summer of that year, and consisted of the installation and testing of automated navigation, radio, and fireproofing systems. In phase two, ten-kilowatt generators were installed in a new power room, and two of the three old forty-kilowatt generators were removed. A spare forty-kilowatt generator was left behind to provide power to the occasional maintenance crew. In phase three, which commenced in the autumn of 1980, security measures such as sealing off windows and installing locks were taken. The stations interior was redesigned, and the six bedrooms were reduced to two bunks for emergency maintenance workers. Much of the surplus equipment was removed at this time, except for emergency food and water, so the stress on the steel support pilings would be lessened.

At this point, the Coast Guard removed all personnel and only planned to paint the tower in 1989, figuring that such a coat would last for fifteen years. They intended to re-evaluate the paint job after ten years, at which time they figured that the tower (would be) recaulked, and the helicopter deck resurfaced. No internal painting will be required.

In 2004, the Coast Guard considered demolishing the station, but subsequent testing found it to be structurally sound so it remains an active aid to navigation. Its predecessor, LV-116, went on to have a final tour of duty at Delaware Bay Entrance until 1970, when it was replaced by a 104-ton Large Navigational Buoy. The lightship was turned over to the National Park Service in 1971 and was exhibited on the Potomac River. In 1982, the lightship was added to the maritime collection of Baltimore Maritime Museum, where it can be seen with its red hull and white CHESAPEAKE lettering.

NASA has used Chesapeake Light Tower as a platform for conducting research. Since 1999, instruments have been mounted on the tower to collect data as part of the Clouds and the Earths Radiant Energy System (CERES). This installation is known as COVE, CERES Ocean Validation Experiment, and provides continuous radiation measurements for validation of CERES and satellite products. In October 2012, Chesapeake Light Tower was transferred from the Coast Guard to the Department of Energy so the structure can continue to be used for climate research.

On June 3, 2016, the General Services Administration initiated an online auction for Chesapeake Light Tower. The terms of the auction stipulated that the CERES equipment and equipment used as a meteorological station by Virginia Tech University may remain on the tower for sixty days after the close of the auction during which time the parties can work out an agreement to keep the equipment in place or have it removed. Fifteen bidders participated in the auction, which ended on August 3, 2016 with a high bid of $215,000.

For a larger map of Chesapeake Lighthouse, click the lighthouse in the above map.


I took a trip out to this lighthouse in 2013 with the Chesapeake Chapter of the U.S. Lighthouse Society. The water doesn't look too rough in the pictures on this page, but it was a windy day with some pretty good swells. All aboard were fine for the first hour or two, but the cumulative effect of all the rocking and rolling finally caught up with a good portion of the passengers. I didn't see anyone eat their boxed lunch, and there were plenty of people losing what must have been their breakfasts in buckets that were graciously provided by the crew. I was getting more than a little queasy by the end of the trip and was grateful to be back in the calm waters of the marina. I took my box lunch to go and enjoyed it during a visit to Cape Henry Lighthouse.