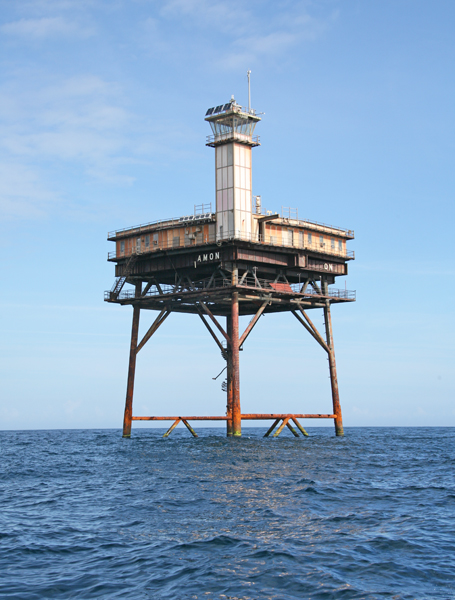 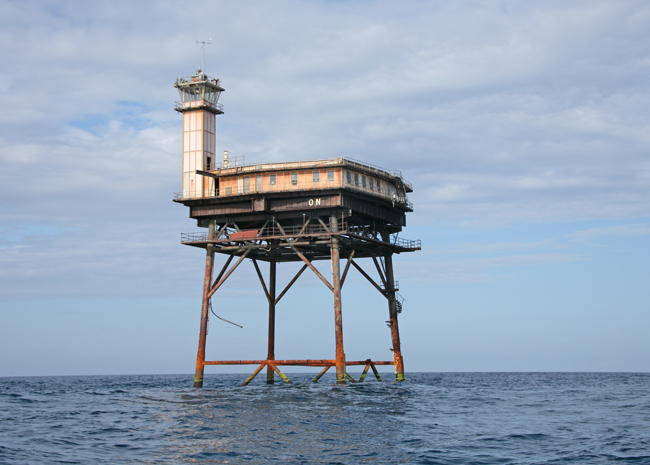 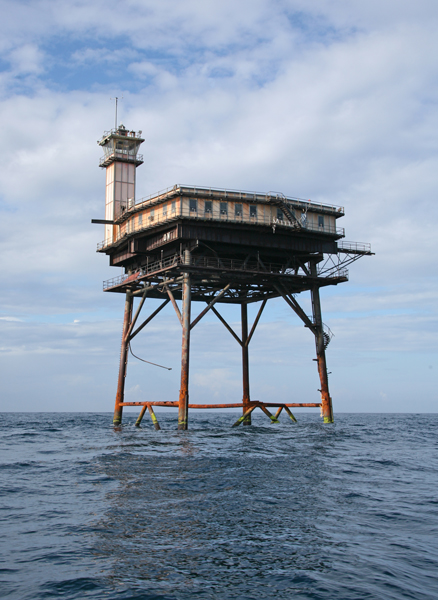 A lighthouse was completed on Cape Hatteras in 1803 to help mark the dangerous shoals, but even when this early structure was replaced in 1870 by Americas tallest lighthouse, Cape Hatteras Lighthouse was still unable to reliably warn mariners of Diamond Shoals. Cape Hatteras Lightship was stationed on the offshore shoals from 1824 until it was heavily damaged in 1827, and the station had no manned presence for the next seventy years.

After receiving petitions from underwriters in New York and numerous masters and merchants engaged in the coasting trade, the Senates Committee on Commerce asked the Lighthouse Board in 1883 to consider the advisability of placing another lightship on Diamond Shoals. The Lighthouse Board had earlier placed whistling buoys on the shoals but found it impossible to keep them in position. As anchoring a lightship would be even more troublesome than the buoys, the Board, after satisfying itself that a lighthouse could be built and maintained there, requested $500,000 from Congress to permanently mark the shoals.

An act approved March 2, 1899, allotted $200,000 for the establishment of a lighthouse on Outer Diamond Shoal, provided that the total cost did not exceed $500,000. Bids for the project were advertised on January 9, 1890, and an engineering committee met on July 24, 1890 to examine the four bids received. The lighthouse was to have a focal plane of 150 feet above low water, contain eight stories, plus a watch room and lantern room, and be set atop a solid and massive foundation sunk into the shoal. After one bid was rejected for being informal and a second for being more than three times the amount authorized by congress, a $485,000 contract was awarded to Anderson and Barr, who had provide the caisson foundation for Fourteen Foot Bank Lighthouse in Delaware Bay and agreed to have this new structure ready for lighting on January 1, 1892.

The contractors tried unsuccessfully during the spring of 1891 to ascertain the character of the site through borings, but, undaunted, started constructing the iron caisson foundation at Norfolk, Virginia. The foundation was towed by three powerful tugs to the construction site, where it arrived on the morning of July 1, 1891. The caisson was forty-five feet tall and was initially sunk in twenty-five feet of water. Over the next few days the caisson gradually settled into the shoal until by July 4, only five or six feet remained above the water. The contractors commenced increasing the height of the caisson on July 4, but heavy seas soon stopped them, and a storm on July 8 destroyed the caisson and ended this first attempt to build a lighthouse on Diamond Shoals.

The Lighthouse Board decided that before another attempt was made, formal test borings should be made. To this end, a skeletal, iron platform was constructed, and, buoyed by pontoons, it arrived off Cape Hatteras on May 25, 1894. Four piles were driven through the corners of the platform to secure it to the shoal, and on May 28 borings were taken to a depth of 105 feet below the surface of the shoal. The borings consisted mainly of fine alluvial sand and convinced the Lighthouse Board that a skeletal, iron tower supported by heavy iron piles would be the proper structure for Diamond Shoals. A modified design for the offshore lighthouse was adopted by the Board on October 7, 1895, but the following June Congress directed that a portion of the appropriation for Diamond Shoals Lighthouse be used for construction of a lightship and the remainder be returned to the treasury.

Lightship LV-71 was completed in 1898 and took up position on Diamond Shoals that summer, serving there until being relieved by LV-69 on November 24. The difficulty in anchoring a lightship on the shoals is demonstrated by the fact that LV-69 broke its anchor on January 8, 1899 and dragged her replacement anchor one mile on January 25, and again on February 1. On August 15, 1899, a powerful hurricane started buffeting Cape Hatteras. Captain Howling ordered the lightships main engine to full steam to relive the strain on the anchor chain. The monstrous seas stove in the skylight, broke the fire-room ventilator, and eventually drove the vessel off station.

On August 17, after sounding and finding no bottom, Captain Howling decided to slip the anchor chain and give the vessel all possible steam. The lightship, however, was no match for the hurricane, and the vessel was driven ashore at 3:30 a.m. on August 18. The Creed Hills lifesaving crew appeared on scene two hours later and, with seas going completely over the vessel, safely removed the exhausted crew.

The Chapman-Merritt Wrecking Company was paid $15,000 to free the vessel and tow her to port. After being repaired, LV-69 relieved LV-71 at Diamond Shoals on September 2, 1900.

On April 28, 1904, Congress approved an act that would pay $590,000 to Albert F. Eels of Boston if he could successfully build a lighthouse on Diamond Shoals and have it stand for five years. Eels was to build the lighthouse and operate it for one year at his own expense. After that, the Lighthouse Board would take control of the tower and operate it for four more years. If the lighthouse were still deemed to be in a substantial and satisfactory condition, Eels would then receive payment. The act was amended the following year to raise the promised amount, but Eels never began work on the project. Instead, lightships remained anchored on Diamond Shoals.

On August 6, 1918, the German submarine U-140 attacked the merchant vessel SS Merak, near the Diamond Shoal Lightship. The lightship issued a warning by wireless to other vessels in the vicinity and shortly thereafter received six shots from the submarine. The twelve-man crew abandoned ship and rowed ashore. After attacking another merchant vessel in the area, the submarine returned and sank the lightship.

In the 1960s, six Texas Tower lighthouses were built at offshore locations along the East coast. The fifth such tower was completed at Diamond Shoals in 1966, replacing lightship WLV-189. This modern lighthouse, with a focal plane of 125 feet and equipped with eight bedrooms, was manned until 1977. Hurricane Fran severely damaged the tower in 1996, and its light was extinguished in 2001. A navigational buoy is located not too far from the light tower.

A sealed auction for the lighthouse, which at one point was thought to be structurally unsound, was held with a closing date of May 24, 2012, but, after not acceptable bids were submitted, a second sealed auction, with a minimum bid of $15,000 and a closing date of August 31, 2012, was scheduled. This second auction attracted only one bidder: Dave Schneider, president of Minnesota-based Zap Water, who submitted a bid of $17,200 and received the title to the property in late September. Accessing the tower may prove difficult for the new owner, as the listing for the auction noted that the ladder leading from the ocean to the living quarters had been destroyed and that in its current condition the tower cannot support a helicopter landing.

Schneider likens his task of restoring the lighthouse to a person who finds a dilapidated old Camaro and wants to return it to its former glory. "I have the same situation. It's just a heckuva lot bigger," Schneider said. "It's old, it's rusty and it was made in 1966. But there's a lot of potential there."

Schneider made his first visit to the lighthouse on November 28, 2012, and spent about five hours examining the property. In 2003, the Coast Guard estimated that renovating the lighthouse would cost about $2.3 million. By installing a seventy-five-foot handmade rope ladder instead of a mechanical boat lift, Schnedier has shaved about $1 million off the estimate and plans to see additional savings by using volunteer labor.

Once the light tower is restored, Schneider plans to use the tower for research by Zap Water and other companies. He envisions researchers taking advantage of the tower's enormous space and offshore location to study wind turbines, solar power, climatology, metal coatings, marine biology, and other subjects.

For a larger map of Diamond Shoals Lighthouse, click the lighthouse in the above map.

Diamond Shoals Lighthouse is best seen by boat. I visited the lighthouse with Captain Scott Caldwell of Coastal Inshore Charters.


When you go out on a charter with a fishing captain, they typically don't get the lighthouse thing, just like you might not understand the fishing thing. They are usually just dying to get their line wet, and that was the case with Captain Caldwell. Seems his preferred fish is Cobia, which tend to stay near the surface. During our return trip, he went up top so he could spot them better, and as soon as he saw their dark brown form, he would stop and cast out to them. We managed to get a couple into the boat, and I must admit it is rather exciting to have a fish that large on the line. We also spotted a large sea turtle on the way in, which was another bonus.