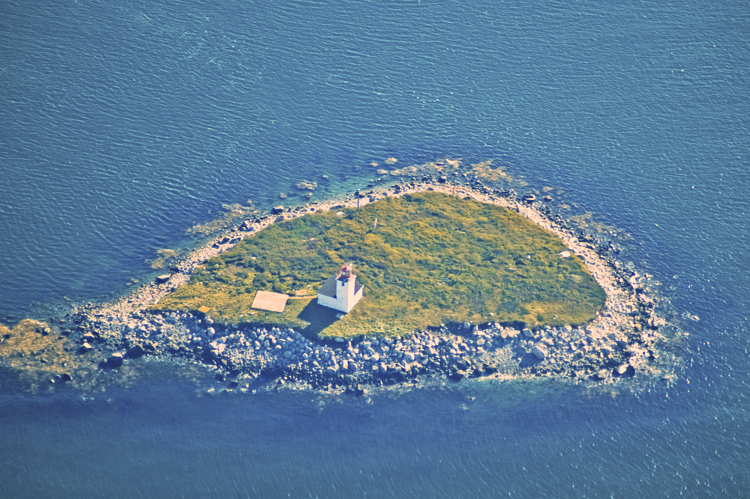 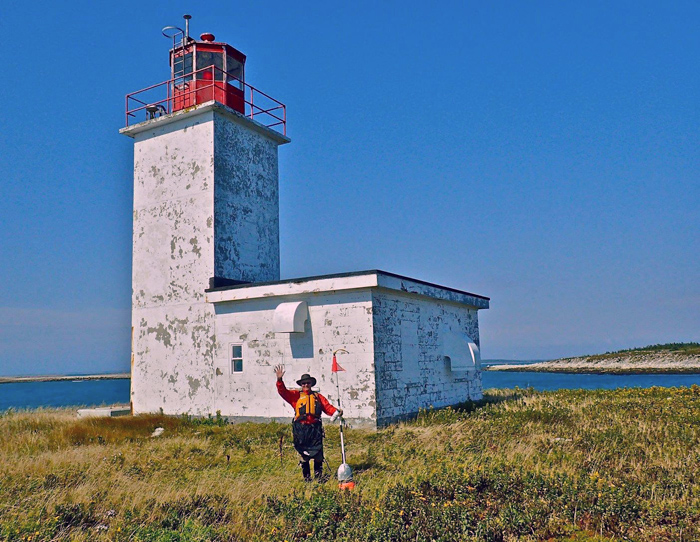 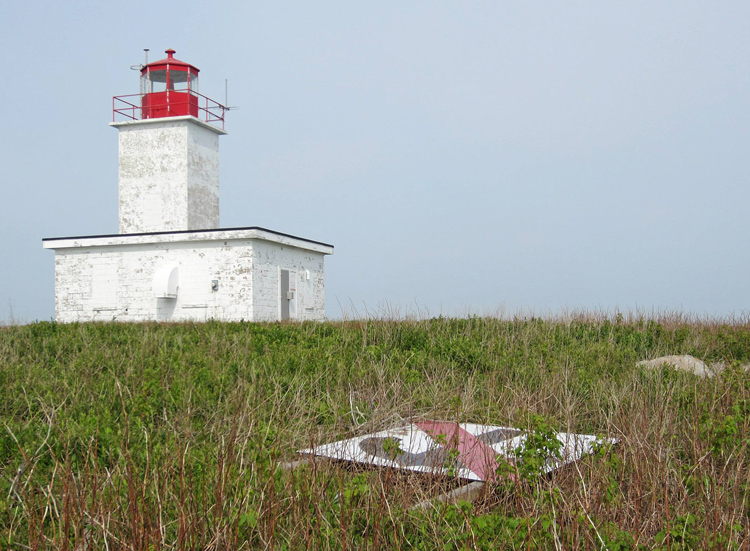 Schooner Passage is said to be the shortest, most direct route between Yarmouth and Cape Sable. As its named implies, the passage was a favorite route for schooners plying the coast of Nova Scotia. The passage runs through the Tusket Islands, a collection of over twenty islands and as many rocks and shoals, and requires a mariners full attention. The intricacy of this passage can be seen by reading from the Nova Scotia Pilot:

To run through Schooner Passage from the eastward keep Owls Head open of Allen Island, bearing 323°, which will lead eastward of Old Man and Little Bald Tusket Shoals, and when the barn of Ellenwood Island appears in range with the northeast end of Peases Island alter course immediately to keep these marks in range, in order to pass westward of Peases Island Ledge, which should be rounded close-to on the flood, as it sets strong toward the southern point of Peases Island. Having passed the Narrows, bring Candlebox Island, which will be recognized by its lighthouse, midway between Allen and Haymaker Islands, and steer for it; this course will lead clear of Haymaker Ledge and Allen Rock, and after passing Allen Island keep to the westward and pass westward of Schooner Passage Rock by bearings of Candlebox Island Lighthouse. Pass Candlebox Island close-to on its western side, and steer out through the Narrows of the northern entrance, with the southern point of Candlebox Island apparently in range with Turpentine Island, until Owls Head appears in range with the western tangent of Haymaker Island, and with these latter marks in range astern steer out westward of the bell buoy between Murder Island Shoal and the shoal spit extending from the northwest point of Murder Island.

The lowest offer to erect the lighthouse received in 1891 was too high, so it was decided to hire a foreman and construct the lighthouse using day labour beginning in the spring of 1892. The Department of Marine reconsidered this decision, and in 1892 invited new tenders for construction of the lighthouse. John B. Porters offer of $2,248 was the lowest received and was accepted. Porter satisfactorily completed his contract, and the light was placed in operation on February 1, 1893. The island was purchased from Benjamin and Albert LeBlanc for $125.

The lighthouse stood near the centre of the small island and consisted of a square, wooden tower with an attached dwelling, both painted white. A red, iron lantern room surmounted the tower, and in it, a red light was exhibited at a height of fifty-six feet about high-water mark. Benjamin LeBlanc was hired as the lights first keeper at an annual salary of $300.

Norman Cottreau was appointed the second keeper of Candlebox Island Lighthouse, after having served in World War I. Keeper Cottreau lived in the small lighthouse on the island with his wife Clara and nine children. Lois Cottreau Nickerson recalled her childhood on Candlebox Island in an interview with Chris Mills of the Nova Scotia Lighthouse Preservation Society:

I had four brothers and we were five girls. When I was small, it was great. But when I got a little bit older that I needed friends, it wasnt so great. I didnt like it at all. No, I never liked it. It was too closed in. No friends, no nothing.

Summer time wed go fishing, swimming. We couldnt go very far in the water because it was too cold. My father would plant a little vegetable garden. Wed put nets out to get mackerel and herring and wed salt em for the winter. We had to salt everything, meat and all. Its a wonder we havent all got high blood pressure!

We had a cow there to have fresh milk. One time my father couldnt find his cow  and that island isnt that big! Anyway, they had brought a bull on the next island  Deep Cove Island. The darn cow had swum there! My father had to go get her, aboard the boat!

Delbert Surrette served from the 1940s until 1963, when the current lighthouse was erected on the island. This lighthouse is in the familiar plan of a square, tower rising from one corner of a rectangular service building with a flat roof.

Leforest Huck Norwood served as the final head keeper of the lighthouse from 1985 to June 18, 1986, when the station was de-staffed. Keeper Norwood was the assistant keeper on the island under Lester LeBlanc from 1981 until Keeper LeBlanc retired in 1985. Huck was passionate about exercising, and each day he would jog the perimeter of the island twenty-two times, a distance of roughly six kilometres. An aerial photograph of the island from 1987 still clearly showed Hucks jogging path around the island and also showed that the keepers dwelling had been removed, leaving just the lighthouse and a helicopter landing pad.

For a larger map of Candlebox Island Lighthouse, click the lighthouse in the above map.

Candlebox Island Lighthouse is best seen by boat, though a distant view from land should be possible. Tucket Island Tours offers excursions that pass the lighthouse, and Coastal Adventures offers sea kayaking tours that pass by the lighthouse.