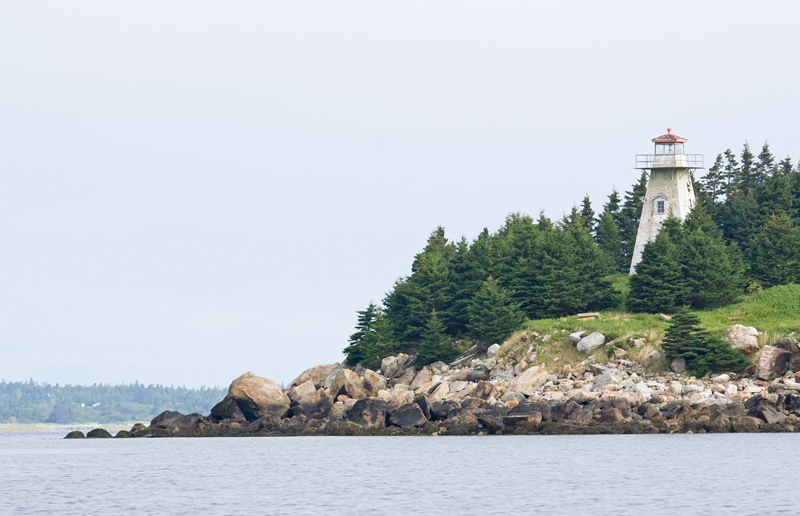 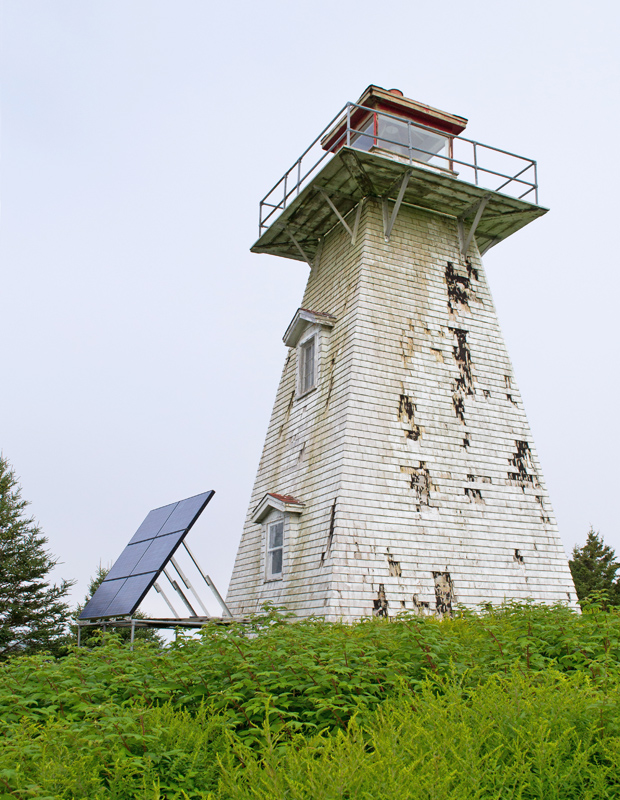 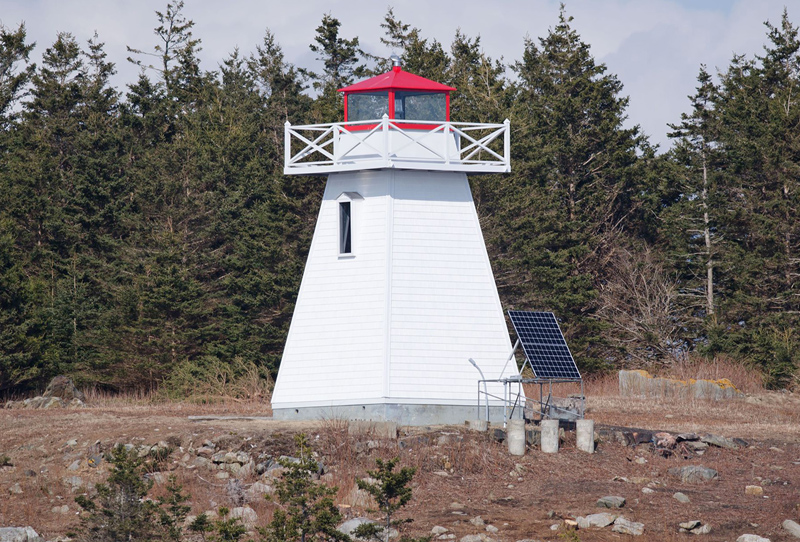 Tusket, a named that is applied to a town, a river, a waterfall, a lighthouse, and a group of islands in southern Nova Scotia, is derived from the Mikmaq Tukseit or Neketaouksit, meaning a great forked tidal river. The name Tusket was first applied to Tusket River, which indeed has several branches and flows through a series of lakes before becoming a tidal estuary near its mouth. The Tusket Islands are a group of islands situated on the west side of the entrance to Tusket River. Tusket River Lighthouse sits on Big Fish Island, which is on the eastern side of the entrance to Tusket River.

In 1860, the inhabitants of Tusket petitioned the government of Nova Scotia for a beacon light and buoys at the mouth of Tusket River, but it wasnt until 1864 that a lighthouse was built on the southwest point of Big Fish Island. The original lighthouse was rather unique, consisting of a dwelling that had two dormer windows in its roof for displaying lights. The following description of the lighthouse is from the Annual Report of the Department of Marine for 1874:

The light at this station is shewn from two dormer windows, provided with iron sashes 25 feet apart; one placed on the east side of the building and the other on the west.

This light, which last year consumed 160 gallons of oil, was inspected on 7th May, and 139 gallons oil delivered. Three tanks are at the station in good order. The light-house and dwelling are in one building, and were painted this year. There is also a barn 25 x 18 feet, and an oil store 20 x 16. The store was built this year, and was much needed at this station. The road to the landing, about a quarter of a mile, is in bad order, and will require about $100 to be laid out on it next season. A boat 14 feet long is supplied to this station. Mr. Joseph B. White was appointed keeper in 1864.

Joseph B. White kept the light from 1864 until 1889, and he was followed by three members of the LeBlanc family. Severin LeBlanc served from 1889 to 1925, L.L. LeBlanc took charge of the light in 1925, and Luke LeBlanc was appointed keeper in 1939. Joseph B. White was likely Severins father, as this area of Nova Scotia is French speaking, and White would be the English version of LeBlanc.

In 1911, a fourth-order Fresnel lens was installed atop the dwelling to replace the two fixed white catoptric lights that had previously been exhibited. This lens produced an occulting white light with the following characteristic every twenty seconds: visible eleven seconds, eclipsed three seconds, visible three seconds, eclipsed three seconds. The roof of the dwelling was modified at this time, and a single lantern room that projected above the roofline was built on the west side of the lighthouse.

Betty (LeBlanc) Palleschi spent part of her childhood at Tusket River Lighthouse, after her father Luke LeBlanc moved from Massachusetts back to Nova Scotia and then was appointed keeper on Big Fish Island in 1939. Luke LeBlanc, a veteran of World War I, was a skilled carpenter but applied for a job as a lighthouse keeper, when preference was given to war veterans. Luke and Tessie had seven children when they moved onto the island, and two more would be added during their time there.

Betty Palleschi shared her memories of growing up on Big Fish Island in an article that appeared in The Lightkeeper, a publication of the Nova Scotia Lighthouse Preservation Society:

Life with 11 of us on the island could be hectic. We had school and chores. In good weather, we rowed a boat to shore to go to school, then walked over a mile. I still know how to row a dory, and I would tell all of my children and their friends that I rowed, then walked to school whenever they complained about getting up and going to school.

During the winter, we boarded with family and friends on the mainland. Winters were tough, since we had no plumbing. We were used to using an outhouse, behind the lighthouse, but in colder months, wed go to the bathroom in pots we kept under our beds. My mother emptied the pots every day.

I have fond memories of growing up on the island with all of my sisters and brothers. They saved me  the life of a lighthouse keeper was a lonely existence. We liked playing outside, running around, picking fruit and fishing. We liked to listen to music. My brothers, Lolly and Victor, learned to play the guitar and harmonica. They kept us entertained singing the latest songs that we heard from the radio.

Sundays were for church and socializing. We rowed out to the wharf and walked two miles to attend Mass. It didnt feel very far or inconvenient to us back then. If the weather was nice, wed picnic after church or visit with other lighthouse families. We would go to Comeaus Hill or Peace Island or Candlebox Lighthouse. All of these lighthouses are now gone too! Such a shame to have lost them all.

Winters were hard on Fish Island. The weather was unpredictable but for my mother she found the season to be a very social time. There were two to three cabins on the island that were home to a few local fishermen for the fishing season. The season was from the end of November thru to the end of May. With the men came a woman cook. To my mother, this cook was her female adult company to socialize with. It helped her get through the tough times. In the summertime, there were also visitors to the island to come see the lighthouse and picnic.

The LeBlancs time on the island came to an end in 1951, after Luke LeBlanc came down with tuberculosis and had to be hospitalized. Once healthy again, he built a family home in Lower Wedgeport and resumed his work as a carpenter.

A square, wooden, pyramidal tower was erected on the island in 1957, and a detached dwelling was built for the keeper not too far away. Lightning struck this relatively new lighthouse during a severe storm in 1961, and the tower burned to the ground. The islands third lighthouse was promptly constructed after the fire.

A second, and more modern, dwelling was built on Big Fish Island in 1967-1968, but it was only two years later, in 1970, that the station was automated. Both dwellings were moved by barge to Pembroke in 1971.

Tusket River Lighthouse was refurbished in 1995, but it gradually fell into disrepair after this. In early 2019, the Coast Guard replaced the historic wooden tower with a modern prefabricated one.

For a larger map of Tusket River Lighthouse, click the lighthouse in the above map.

Tusket River Lighthouse is best seen by boat, though a distant view from land should be possible. Tucket Island Tours offers excursions that pass the lighthouse.