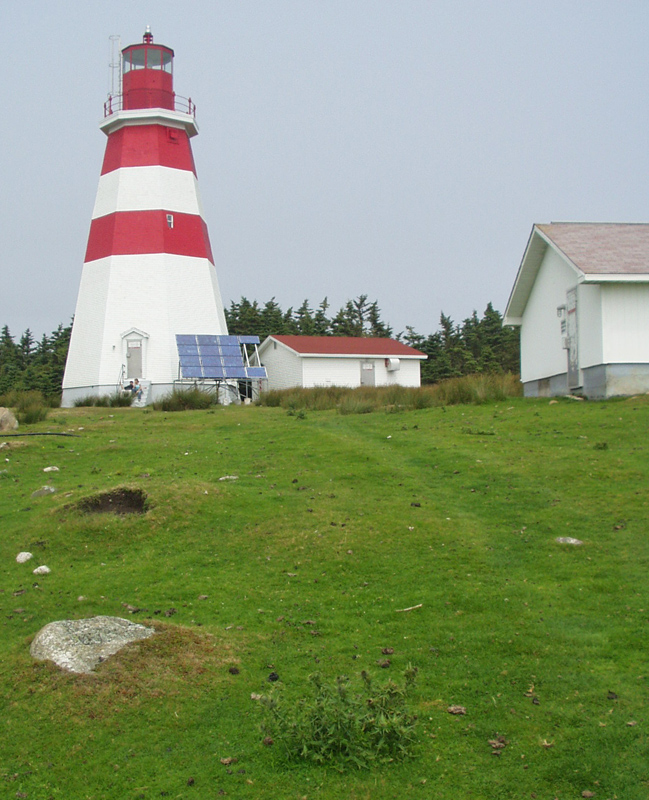 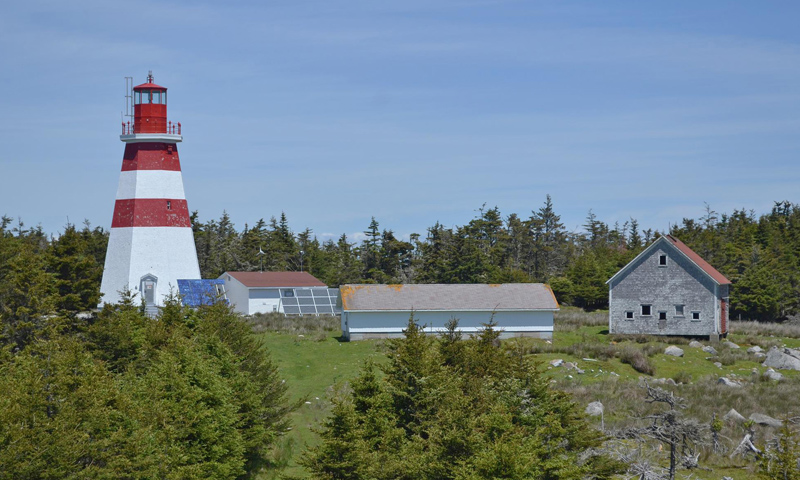 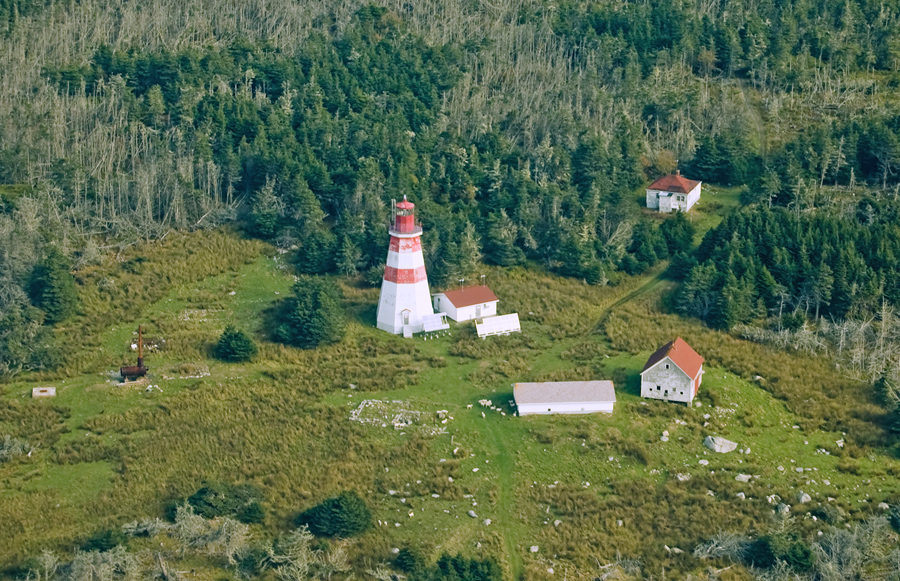 Seal Island lies roughly fifty kilometres south of Yarmouth, and is roughly five kilometres long and 700 metres wide. While Cape Sable Island just edges out Seal Island as the southernmost island in Nova Scotia, Seal Island is located farther west and is thus a critical point for vessels sailing to and from the Bay of Fundy. In 1826, a committee in the House of Assembly of Nova Scotia noted that the province was supporting six lighthouses, at an annual cost of 2,000£, while New Brunswick supported just one and Prince Edward Island none. Given this imbalance, the committee hoped that New Brunswick might be willing to contribute to the construction and maintenance of a lighthouse on Seal Island. New Brunswick agreed, in 1830, to pay 500£ toward the construction of the lighthouse, which was completed in 1831 at the cost of 1,009£, and pay half of the annual operating expense. Messrs. Tidmarsh and Sargent of Nova Scotia and Messrs. Barlow and Ward of New Brunswick oversaw the building of the lighthouse.

Richard Hichens and Edmund Crowell had been living on Seal Island since 1823 and were selected as the first keepers of Seal Island Lighthouse. The pair had been helping shipwrecked mariners since moving to the island, and they continued in this role as keepers. Government records show they were often reimbursed for their expenditures in helping stranded mariners, and in 1830 they were given 50£ to employ two able-bodied men to reside with them on the Seal Islands, for the purpose of assisting shipwrecked mariners. After the lighthouse was finished, the government gave Hichens and Crowell a supply of bread, beef, and port to be used for the relief of shipwrecked mariners and for themselves, when weather prevented them from obtaining supplies form the mainland.

Seal Island Lighthouse was the eighth lighthouse built by the government of Nova Scotia. A stone and mortar foundation was laid first to support the wooden, octagonal tower that has massive forty-seven-foot-long and sixteen-inch-square timbers at each of the eight corners. The tower has a diameter of thirty-and-a-half feet at the base and tapers to thirteen-and-a-half feet at the gallery. From base to vane, the lighthouse, which was originally painted white, stands sixty feet tall. The lantern room floor was supported by heavy wood knees, while stout cross members braced the walls of the tower. To assist mariners during periods of fog, a bell was placed at the station in 1832.

Hichens and Crowell jointly looked after the lighthouse until 1836, when sole charge of the light was given to Hichens. Crowell remained on the island and received an annual stipend of 30£ to assist shipwrecked mariners. Crowells descendants that took care of the light after Hichens and served from 1861 to 1926.

After a visit to Seal Island in 1857 when Richard Hichens was still keeper, William Condon, Superintendent of the Board of Works, wrote:

I have heard several complaints of this light house not being as useful as it might be, on account of the light exhibited being very poor. I did not see any apparent neglect on the part of the keeper, during my visit of inspection, and I am inclined to think that here, as at Shelburne, the principal fault is with the lamps in use. I am strengthened in this opinion, from my own observation of the "light," which even at an early period of the night did not exhibit that brilliancy desirable, and which is expected from a light house so important in position as that of Seal Island, and where so many lamps are in use. As half of the expense of this establishment is borne by New Brunswick, care should be taken that there be no cause of complaint against this light house, on the ground of want of proper lamps, &c. I would therefore recommend that the present old lamps be replaced by new ones early next season, the new lamps to be fewer in number, but more effective in power and brilliancy.

There is scarcely a more important light on our coast than this one at Seal Island, and I will do all in my power to make it as effective as possible early next season.

New lamps were supplied the following year, and a new lantern room was installed atop the lighthouse in 1862. Blonde Rock lies roughly six kilometres south of Seal Island and snared many a vessel. It received its name after the HMS Blonde struck the rock in January 1782. The Blonde had recently captured an American privateer near Salem Harbour and was headed to Halifax with sixty-five prisoners aboard when it ran aground. The crew and prisoners launched boats and made it safely to Seal Island, but they all might have perished if the American privateers Scammell and Lively hadnt arrived a few days later in search of water. A landing party from the Lively struck a deal with the crew of the Blonde whereby the American prisoners would be released in exchange for the Lively putting the British sailors ashore in Nova Scotia.

In April 1869, the steamer St. George, bound from Portland, Maine to Glasgow with a load of wheat, wrecked on Blonde Rock. The crew were taken off and landed at Barrington, and the stranded hull and cargo were sold at auction. This accident prompted some to insist that a second light should be exhibited from Seal Island Lighthouse at a lower level, so that it might be visible beneath a fog bank. As no light could penetrate fog, what was really needed at Seal Island was a powerful fog alarm.

The number of lamps in use at Seal Island Lighthouse was increased from eight to twelve on October 1, 1869, and in August 1870, a power steam whistle was placed in operation. During snowstorms and periods of fog, the whistle would sound two five-second blasts each minute, with the two blasts being separated by five seconds. George Fleming and Sons of Saint John, New Brunswick supplied the needed equipment, while Mr. Hanson of Little Lepreau built the engine house and a dwelling for the engineer. After passing the required examination, Samuel Reardon was appointed the first engineer of the fog whistle at an annual salary of $500.

A second-order Fresnel lens, that had been imported from France and was in storage, was placed in operation atop Seal Island Lighthouse starting on October 25, 1870. The lens produced a fixed white light at a height of ninety-eight feet above the sea and was reportedly seen up to thirty miles in favourable circumstances. The whistle could be heard fifteen miles in calm or moderate weather and between five and eight miles in stormy weather or against the wind. With Seal Island being equipped with a powerful fog alarm and light, the government discontinued the funding for a boatman on the island to help save lives in the event of shipwrecks.

A well was dug to provide water for the steam whistle, but when the well went dry, water had to be hauled in after a nearby pond dried up. A reservoir, twenty-feet square and eight feet deep, was built at the station in 1871 and linked to the nearby pond, but just a few months after it was finished, its brick walls fell in. An eight-inch-thick retaining wall was built for the reservoir the next year, and this wall was lined with brick and faced with cement to provide a more durable structure. After the reservoir walls collapsed, water had to once again be brought in along with the coal required by the fog alarm. As a $1.50 per ton was the lowest rate available for hauling supplies across the island, officials decided that a road should be built from the landing on the east side of the island to the whistle house. While this required a considerable outlay due to the swampy nature of the ground, a cost savings would be had over time as a horse was brought in to haul provisions over the road.

Corning Crowell, who had been serving as the fog alarm engineer since 1873, replaced Thomas Crowell, his father, as keeper in 1880. Thomas had been having issues with his eyes for a few years and was finally superannuated. At this time, the position of engineer was eliminated and an assistant was sent to the island to work with Corning Crowell.

On February 16, 1903, the whistle from a new fog alarm building was placed in operation. Instead of being near the lighthouse like the original whistle house, the new one was located on the beach near the southern tip of the island, 585 feet south of the lighthouse, where it was thought the whistle would have better range. The cost of the new building, which was a long, wooden, rectangular structure, was $3,838. In 1918, an oil plant replaced the steam fog-alarm plant.

In 1907, a new second-order lens was installed in the lantern room that changed the lights characteristic to a group of three flashes every fifteen seconds. The following year, two red horizontal bands were painted on the white tower to make it more conspicuous when snow was on the ground.

A new double dwelling was built for the keeper and his assistant in 1954.

The circular iron lantern room and Fresnel lens atop the lighthouse were removed in 1978, and a DCB 36 rotating aeronautical beacon and a new aluminum lantern room were installed in their place. The old lantern and lens were taken to Barrington and installed atop a replica of the top half of Seal Island Lighthouse that now serves as Seal Island Light Museum.

By 1986, the families of the keepers had moved off the island, and two teams of two keepers each began working alternate twenty-eight-day shifts on the island. Work crews form the Coast Guard base in Saint John began constructing a new engine room next to the lighthouse in 1989 to house remote monitoring equipment, and the following summer, the light became unwatched when James Nickerson left the island on October 17.

For a larger map of Seal Island Lighthouse, click the lighthouse in the above map.

The lighthouse is best seen by boat.