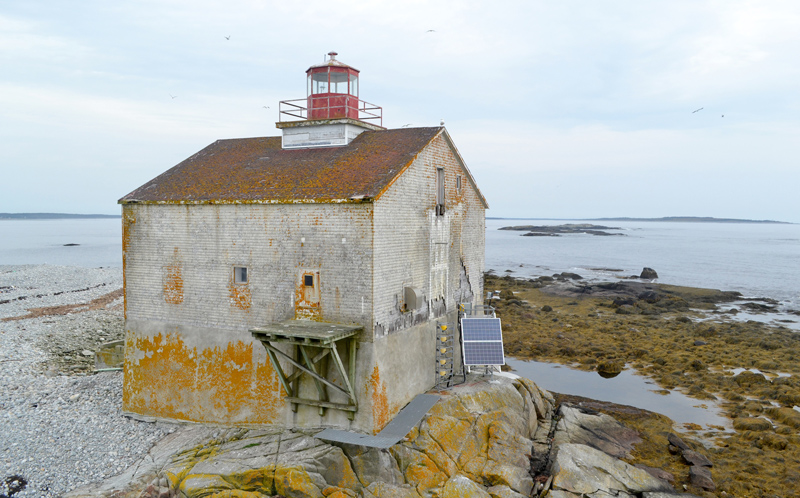 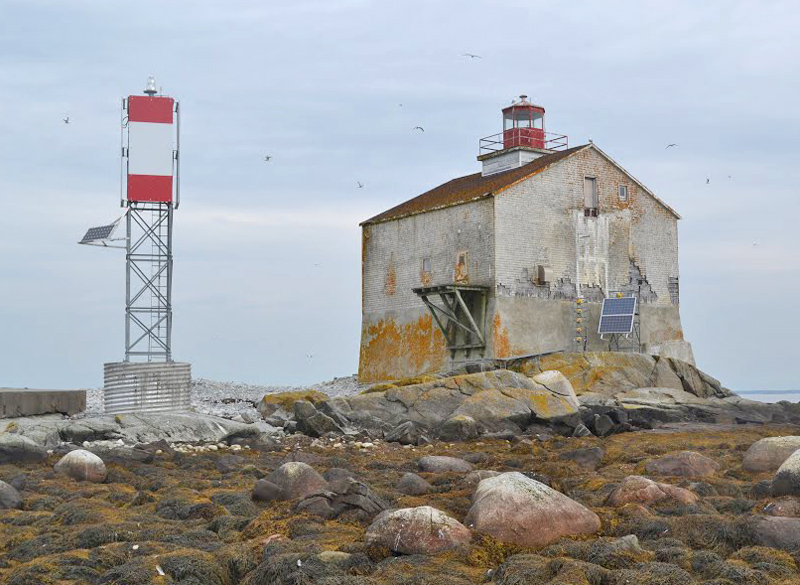 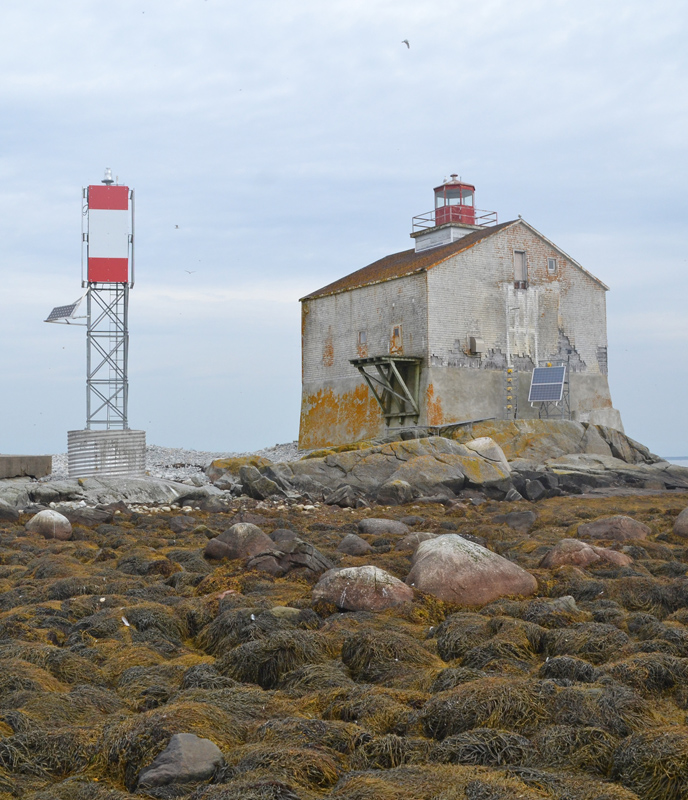 The Salvages are a line of rocks, nearly three kilometres long, situated at the southern side of the approach to Negro Harbour. Locally, the rocks are known as The Halfmoons, due to the crescent-shaped arrangement of some of the rocks. Eastern Halfmoon, Western Halfmoon, Flying Rock, and Northeast Rock are the individual names of these dangerous obstacles.

As the southeast side of the rocks are steep-to, approaching them at night or during thick weather was a dangerous undertaking. In 1915, a fog-alarm building was finished on a rock near the southern end of The Salvages that rose roughly three metres out of the sea. A class E diaphone plant, in duplicate, was installed in the building to sound a type G diaphone foghorn that projected from the buildings southern wall. J.L. Colter served as foreman for the day labour that was responsible for the construction of the fog alarm building, a dwelling, a boathouse, and the installation of the fog alarm equipment. Given its exposed location, the fog-alarm building was built of concrete, with walls forty-one centimetres thick to withstand the pounding of the North Atlantic.

Jesse Obed was hired as the first engineer for the stations diaphone fog alarm at an annual salary of $992.50, and he served until 1932. Mariners were provided the following information before the fog alarm was placed in operation:

The fog-signal will be installed in a rectangular concrete building, with a flat roof, painted white. The horn will be elevated about 38 feet above high water and will project form the southeastern end of the building and point 116°.

A white square wooden dwelling with flat rood adjoins the northwestern end of the fog-signal building.

In 1917, the duration of each blast was reduced to two seconds, and the length of the silent interval was increased to forty-four seconds.

Victor Crowell was responsible for the fog alarm from about 1945 to 1964, when he was transferred to Baccaro Point Lighthouse after suffering a heart attack. Kathie Crowell MacDonnell was introduced to The Salvages, along with her twin sister, when they were just two weeks old. There wasnt a blade of grass on the entire island, Kathie recalls. Actually, it was one big rock with all kinds of beach rock and would take no more than a half hour or so to walk the perimeter. There was a long walkway up to the doorway as the house was so high in order to protect it from the waves. I remember one storm the walkway was washed away and waves sprayed on the kitchen windows, and we had to get out of the house with a rope ladder. The foghorn was also VERY loud as it and the engine room was housed in the same building that we lived in. No one wanted to sleep in the bedroom on the other side of that connecting wall!

A light was finally established on The Salvages in 1965, and Gaza Soltesz was appointed its first keeper.

On his very first day on The Salvages, after having been transferred from Gull Rock, Jim was staring out the kitchen window, thinking that his surroundings hadnt changed much, when a rogue wave struck. A foamy, green wall of water wrapped around the corner of the dwelling and took out everything between there and the boathouse. The walkway and hundreds of tons of gravel were swept away as the wave cleared everything above bedrock. The shingles beneath the kitchen window and all along the north end of the house were stripped off.

Jim enjoyed going down into the fog-alarm buildings first level that made you feel like you were in a ship. In the ground floor level they had glass portholes, he recalled. The glass on the things was an inch and a half or two inches thick. You could look out almost any area out of this basement in bad weather and be looking right into the sea. Literally! It was fascinating. It scared the living daylights out of me, but I couldnt help looking! It was like watching somebody get hit on the highway with a car. Id get in one of those portholes and set there and say, Holy crap, this ones gonna be it! Then the waves would SMACK! Against the side of the house. It was a crazy experience.

Jim had a less thrilling experience in late 1986, when he and his fellow keeper were informed that the station would be automated.

The Coast Guard arrived with the Bell 212 helicopter  it was just before Christmas. We stopped at Gull Rock and took both of those keepers. Then we stopped at Cape Roseway and took them. Then they flew us all to Bridgewater to a hotel and announced that they were shutting us down within the year and then took us back and let us out and flew away.

I was really pissed off about that. Looking back, it was a violent reaction to a totally crass move. The Coast Guard never thought that my family is at home and Christmas is looming ahead of me. Im going to be away from my family and now Youre out of work.

I was really, really annoyed by that. I think it could have been done in  a more humane way. Now, as it turned out, they looked after us, and they looked after us very well. But back then, the Coast Guard didnt recognize that when they set us back on Salvages and flew away, we had nothing! No job, no future, no security. It affected us badly, very badly.

With no clear future, it was hard to remain motivated, especially after a submarine cable was installed and eliminated the work needed to keep the generators running.

For a larger map of The Salvages Lighthouse, click the lighthouse in the above map.

The Salvages Lighthouse is best seen by boat, but a distant view is possible from Baccaro Point on a clear day.

Find the closest hotels to The Salvages Lighthouse