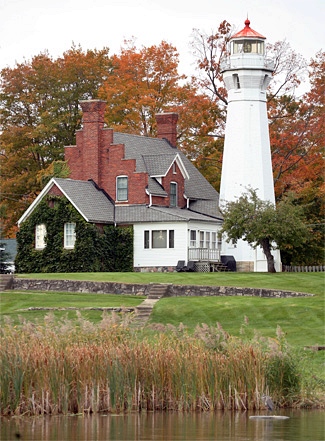 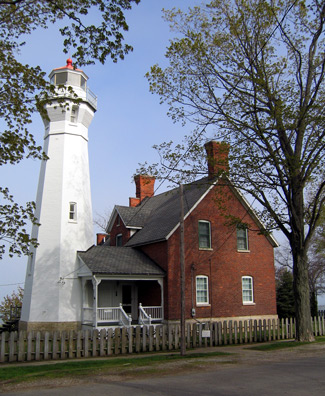 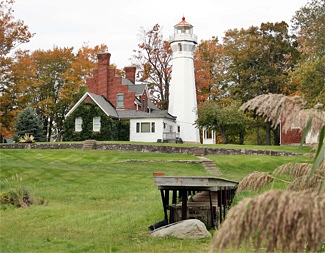 Fort Gratiot Lighthouse was built at the confluence of Lake Huron and St. Clair River in 1825 and Pointe aux Barques Lighthouse was constructed at the tip of Michigans thumb in 1848, but the intervening seventy-five miles of shoreline on Lake Huron remained without a lighthouse for several years afterward. The Lighthouse Board first requested funds for a light to divide the distance between Fort Gratiot and Port aux Barques in 1868. This plea was repeated for several years, with some minor changes being occasionally added. In 1872, the Board noted the proposed light-house is one of the coast-lights of the general system, and is not intended to serve any local interest. The next year, the Board employed the following new line: No argument seems to be necessary to show the necessity for this light.

A harbor light was established at Harbor Beach, roughly fifteen miles south of Port aux Barques, in 1875. While this light reduced the dark space between Fort Gratiot and Point aux Barques, the Lighthouse Board maintained that an urgent necessity for a coastal light still existed.

Congress finally appropriated $20,000 for a lighthouse at Port Sanilac in 1885, and a site was selected and purchased. After specifications for the necessary metalwork were prepared, a contract was entered into, and the lantern room and spiral staircase were delivered to the Detroit lighthouse depot on October 1, 1885. Charles Diem, the contractor charged with erecting the brick tower and keepers dwelling, commenced work on June 7, 1886, and by the end of that month had made excavations for the structures, had put in place the concrete foundation for the dwelling and a portion of the four-feet-thick concrete foundation for the tower, and had laid about one-half of the stone foundation walls for the dwelling. The tower, dwelling, privy, and oil house were completed on October 13, 1886, and the stations fixed white light, produced by a fourth-order, Barbier & Fenestre Fresnel lens, was placed in operation a week later on October 20, 1886. The work of grading, filling, and sodding the grounds, along with building a perimeter fence, laying sidewalks, and digging and lining a well was finished on October 23.

Situated 130 feet from the lakeshore, octagonal Port Sanilac Lighthouse stands fifty-nine feet tall and is connected to the nearby two-story keepers by a covered passageway. The eight-room dwelling had two, 2,200-gallon brick cisterns built beneath its kitchen that were used to collect rainwater for domestic use. Ile aux Galets Lighthouse is the only tower that resembles the one at Port Sanilac.

On July 15, 1889, a ruby chimney was placed atop the lamp inside the Fresnel lens to produce a fixed red light. The characteristic of the light was changed again on April 1, 1925 to a group of three, one-second white flashes, spaced by two seconds and followed by a five second-eclipse. The light was also electrified at this time, a change that increased its output to 18,000 candlepower.

A new brick oil house, measuring eleven feet, ten inches by sixteen feet, four inches and capable of holding 360 gallons of kerosene, was added to the station in 1890. The stepped gables on the oil house complemented the one on the dwelling.

On October 13, 1886, Richard W. Morris, who was serving as first assistant keeper at Thunder Bay Island Lighthouse, was informed that he had been promoted to head keeper of Port Sanilac Lighthouse. Stormy weather prevented Keeper Morris and his family from leaving the island for Alpena until the sixteenth. At 1 a.m. on October 18, the Morris family boarded the steamer Flora at Alpena, and after becoming seasick in Saginaw Bay, safely arrived at Port Sanilac early on October 19. L. Lederle turned control of the station over to Keeper Morris later that day, and the light was exhibited for the first time the following evening. Keeper Morris served at Port Sanilac until 1893 and was later listed as working at the Eleventh Lighthouse District headquarters in Detroit.

William H. Holmes, who had replaced Keeper Morris as first assistant at Thunder Bay Island, succeeded Morris as head keeper at Port Sanilac. Holmes was serving at the lifesaving station on Thunder Bay Island when he met and married Grace Sinclair, the daughter of John Sinclair, the head keeper of Thunder Bay Island Lighthouse. The wedding took place on May 12, 1885, and the following year Holmes was appointed first assistant under his father-in-law. By the end of 1892, William and Grace Holmes had three children, and Keeper Morris reportedly resigned his position at Port Sanilac, so that Grace, who was his niece, wouldnt have to live apart from her husband in order for her children to attend school.

Keeper Holmes starting suffering from neuritis around 1920, and there were many nights when Grace had to haul the oil up the lighthouse stairs. Fortunately, she was well accustomed to lighthouse life by this point, being the daughter and granddaughter of lighthouse keepers. Keeper Holmes passed away of apoplexy on October 13, 1926, at the age of sixty-four, and Grace was appointed keeper in his place. As the light had been electrified in 1924, the keepers workload was much easier. Grace served as keeper until the light was automated in 1928, but she continued to keep a watchful eye on the light, as her new residence was located next door.

Carl Rosenfeld, of Carls Chop House fame, purchased the dwelling portion of Port Sanilac Lighthouse for $4,000 in 1928, four years before opening his popular Detroit restaurant. The tower, which still contains its Fresnel lens, was sold to the Rosenfeld family in 2000, though the Coast Guard is still responsible for the light. The light station was added to the National Register of Historic Places in 1984.

In 2012, the Rosenfeld family placed Port Sanilac Lighthouse, along with a three-bedroom guest cottage, on the market for $1.599 million. The keepers dwelling, which was thoroughly renovated in the mid-1990s, now features three nautical-themed bedrooms, one full bathroom, a half bath, a kitchen, living room, dining room, and a Florida room added in the 1940s with a wall of windows facing the lake. The historic brick oil house, wooden outhouse, and well also remain on the property. The lighthouse, without the guest house, was still on the market in 2013 with a sale price of $999,800.

Jeff Shook, founder of Michigan Lighthouse Conservancy and owner of St. Clair Flats Canal Range Light Station, purchased Port Sanilac Lighthouse for his family in 2014 for $855,000. While he plans to use the property as a vacation home, Shook is investigating the idea of opening the lighthouse to the public on a limited basis. Shooks great-great-great-great-great grandparents were the first lighthouse keepers at Point Aux Barques Lighthouse, just up the coast from Port Sanilac.

On September 13, 2016, the Coast Guard removed the historic Fresnel lens from the tower and installed an LED light in its place. This new light reportedly requires maintenance every three years.

Starting on Friday July 7, 2017 and continuing on every Friday in July and August of that year, the public was allowed to visit the lighthouse between 11 a.m. and 2 p.m. Sanilac County Historical Society conducted the tours.

For a larger map of Port Sanilac Lighthouse, click the lighthouse in the above map.

Starting on Friday July 7, 2017 and continuing on every Friday in July and August of that year, the public was allowed to visit the lighthouse between 11 a.m. and 2 p.m. Sanilac County Historical Society conducted the tours.


The Sanilac District Library has most of the logbooks from Port Sanilac Lighthouse. As the logbooks are fragile, they are not available to the public, but you can view transcribed information from them.