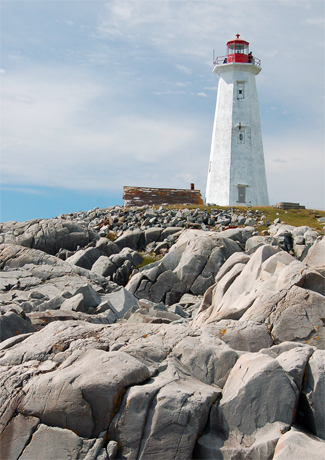 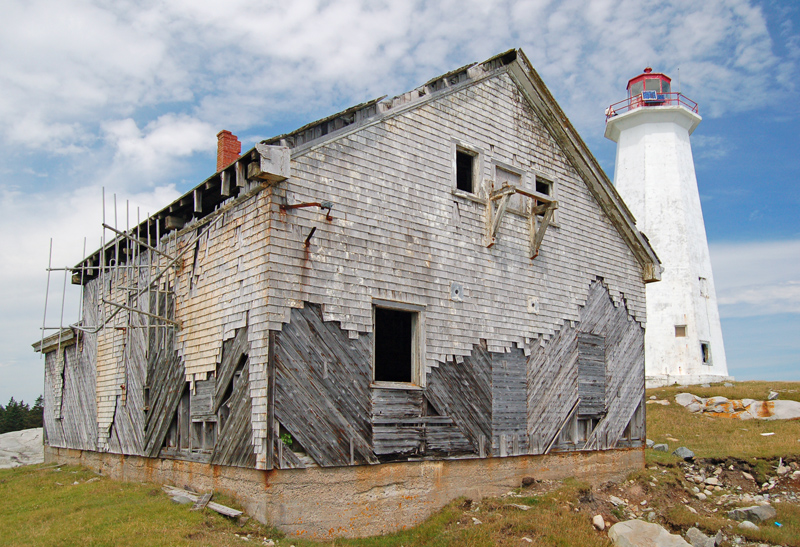 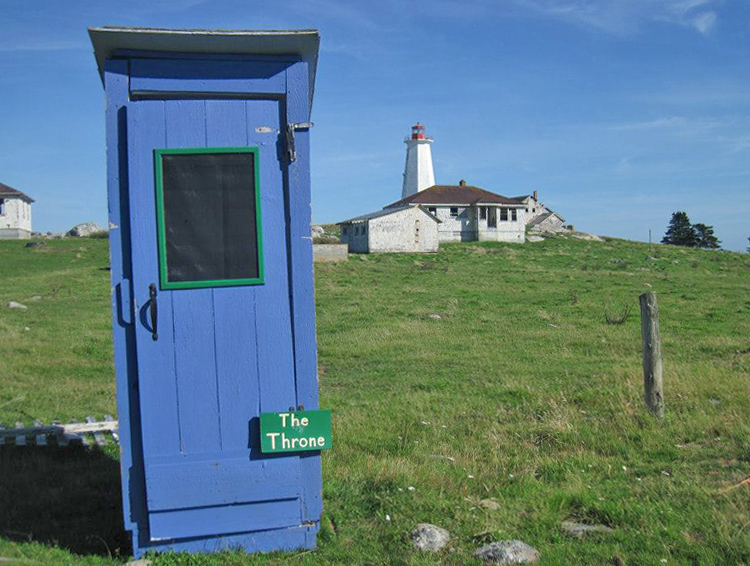 Near the close of the American Revolution, a group of about 400 families in New York formed the Port Roseway Associates and made plans to lay out a township at the head of the harbour at Port Roseway, Nova Scotia. Known as Loyalists, these British-American colonists had opposed the Revolution and remained loyal to King George III. The Crown promised free land, tools, and provisions to entice them to settle in a relatively undeveloped area. In the spring of 1783, more than 5,000 settlers from New York and neighbouring colonies left their homes and sailed north to Port Roseway. John Parr, governor of Nova Scotia, visited the settlers shortly after their arrival and renamed the settlement Shelburne after the current Prime Minister of Great Britain.

Waves of additional Loyalists followed that fall, and, by 1784, the population of Shelburne numbered more than 10,000, making it the fourth largest community in North America. The government ceased the distribution of provisions in 1787, and not long thereafter, many settlers put their houses up for sale and left to try their luck elsewhere. By the 1820s, the population of Shelburne had dwindled to about 300.

In 1787, a Mr. Wilkins in the House of Assembly of Nova Scotia moved that the sum of £500 pounds be granted for erecting a Light House for the safety of the Navigation, leading into the Harbour Of Shelburne. The logical spot for a lighthouse to mark the approach to Shelburne was McNutts Island, which is situated in the middle of the entrance to the harbour. The island is five kilometres long and two-and-a-half kilometres wide, and the top of the high granite bluffs of Cape Roseway, the islands southeast point, was selected as the construction site.

A noble, octagonal tower was built that stood twenty-three-and-a-half metres tall and had walls that were 1.8 metres thick at the base. This was the second lighthouse built by the Province of Nova Scotia. Only the lighthouse on Sambro Island is older, having been finished in 1760. The French did build a lighthouse at Louisbourg on Cape Breton in 1734, but it was destroyed during a British siege in 1758.

Alexander Cocken, who was appointed the first keeper of the lighthouse in 1788, was one of the Port Roseway Associates, and is listed as having arrived in 1783 with his wife and three servants. Alexander had at least five children, the first of whom was christened in 1787 with the name of Alexander Hood Cocken. John Parr Cocken was christened the following year. It appears Alexander remarried in 1791 and then had William, Ann, and Frances during the next few years.

A petition from Alexander Cocken was read before the House of Assembly of Nova Scotia setting forth that the petitioner in the Year 1788, was appointed Keeper of the Light House, on Mc Nutt's Island, at the entrance of the Harbour of Shelburne; by the late Lieutenant Governor Parr, that he has constantly resided there with his family, from the time of his appointment, and faithfully discharged the Duties of his Office; that he has received the Sum of £115 only for his Services, whereby he has been under the necessity of involving himself considerably in debt, for provisions, and other necessary supplies for his family which he is now totally unable to discharge. Keeper Cocken was awarded £50, in addition to the £115 he had already received, and his monthly stipend going forward was set at six pounds and five shillings.

In 1795, Keeper Cocken requested funds from the House of Assembly for a kitchen, cellar, and storehouse, and for making a road across the island. At the time, his residence was very uncomfortable, consisting of just two small rooms. The only landing place on the island was three miles away, at the opposite end of the island, and all supplies for the station had to be packed on the backs of men across a tract of land that was almost impassable even for foot passengers. The sum of £40 was provided for a road in 1802, but no money was allocated toward improving the accommodations on the island.

Alexander Cocken died in 1821, and his son Alexander H. Cocken was placed in charge of the lighthouse. In 1822, Alexander married Jennet McKenna of Carleton Village, right across the harbour from the island.

The commissioners of lighthouses for Nova Scotia gave the following description of the keepers dwelling in 1833:

KEEPERS HOUSE  Consists of a jumble of old sheds in a state of ruin, built at different times, for different purposes. We are inclined to think neither of them was ever intended for dwelling houses. They are said to leak badly. Indeed, evident marks of it are to be seen on the ceilings and other parts of the walls where the water has penetrated. The keepers wife declared to us that she could scarcely keep a fire in the best room in cold weather. The wind blew in in such gusts that the family were obliged to retreat to a small bed-room off the kitchen, which is part of another shed attached to the former.

A new house should be built, as it appears as if repair would be but squandering the money so expended.

This report produced the desired result, and a new house was built for the keeper the next year. Cape Roseway Lighthouse was unique in that it displayed two lights: one from the lantern room atop the tower, and a second one from a bow window located closer to the base of the tower. This report from 1857 provides a good description of the lighthouse and its condition at the time:

There are two fixed vertical lights, the upper or lantern light was from a fountain lamp with 12 burners, the lower light in a bow window, was from a lamp with 3 burners. The light house is a large octagon building of stone, and encased in a wooden frame and boarded and shingled. Light house is painted white with black streaks vertical, on the sea-ward side. There is dwelling house alongside for the keeper, and an outhouse used as a barn and store. Arrived at this place on the 31st July, visited the light house, and found lantern, lamps, &c. in very bad condition, not from any fault of the keeper, but from the fact of being worn out and almost useless. Landed stores on the first of August, and went to the light house and took down the old fountain lamps, had tables made, and the new lamps all ready for lighting at the usual time. I put 9 new catoptric lamps in the lantern, and 3 in the bow window. I put the lamps in operation before I left the light house for the vessel, and was much pleased with its appearance from the water. It exhibited quite a contrast to the light of the night before.  There has been pretty general complaint against Shelburne light for some time back, but with the imperfect lamps the keeper had to work with, I do not think the keeper was to blame.

Alexander H. Cocken hired an assistant to help run the lighthouse, but as more men turned to fishing, it took nearly half of his wages to pay an assistant. For over twenty years, Alexander H. Cocken ran a school where he taught boys reading, writing, arithmetic, history, and geography to help supplement his income. Five or six of the boys lived at the lighthouse while school was in session. The granite rocks near the lighthouse are covered with names and initials, and it is believed that some of these were made by these students. At least one lighthouse keeper left his name in the rocks, and there is even a depiction of the lighthouse.

Charles Stalker was keeper of the lighthouse in the late 1860s, when a report noted that an assistant had been assigned to the station for two months in consequence of the keeper being unfit to attend the duties of his office, his mind being somewhat deranged.

A square fog alarm building was built at Cape Roseway in 1883 to hold the machinery for a steam fog-trumpet along with a brick tank that could hold 6,400 gallons of water. In 1919, a third-order lens was installed in a new lantern room atop the tower that changed the upper light from a fixed light to a flashing light. This allowed the lower light to be discontinued.

Lightning struck Cape Roseway Lighthouse in 1959, causing a fire that severely damaged the tower. Rather than repair the lighthouse, it was decided to build a new one, and Cameron Contracting Ltd. was paid $24,382 to build the concrete tower that remains standing on the island today. The station was automated in 1986, and since then the structures have gradually been deteriorating.

For a larger map of Cape Roseway Lighthouse, click the lighthouse in the above map.

Cape Roseway Lighthouse is best seen from the water. Coastal Adventures offers sea kayaking tours that pass by the lighthouse.