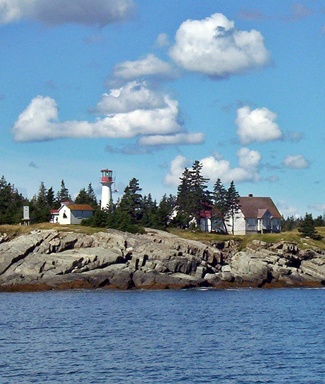 LaHave River extends nearly 100 kilometres from its source in Annapolis County to the Atlantic Ocean. The river is navigable from its mouth to Bridgewater, which is located twenty-two kilometres upstream and is the largest town in the South Shore region. Early on, LaHave River served as the areas main transportation route, and several lumber mills and shipbuilding sites were found along its banks.

Moshers Island and some of its early inhabitants were originally named Moser, but the spelling was later changed to Mosher. The first Moshers Island Lighthouse consisted of a square, two-storey dwelling with an octagonal lantern room on its roof, and Henry Moser was hired as its first keeper at an annual salary of $450. Five lamps set in twelve-inch reflectors were used to produce a fixed red light at Moshers Island, while a flashing white light was exhibited on nearby West Ironbound Island.

The Department of Marine noted in 1869 that the light on Moshers Island was a very serviceable one, on account of the fine harbor lying to the westward of it, where many vessels find shelter in stormy weather. In 1872, two bedrooms for the keeper and his family and a store-room were partitioned off and finished in the upper storey of the lighthouse.

When Keeper Henry Moser passed away in 1885, his son Samuel Moser was appointed to take his place. In 1892, a new hand fog-trumpet was supplied, and Keeper Moser was required to sound it in response to signals from vessels during periods of limited visibility.

When Edward M. Mosher was serving as keeper of the lighthouse in 1950, a fire broke out. The extent of the damage is not known, but the original lighthouse remained in service for a few more years. In September 1953, Atlantic Bridge Co. Ltd. of Lunenburg was awarded a contract to build a new lighthouse and detached dwelling on Moshers Island. This new lighthouse was a square, wooden, pyramidal tower that rose to a height of twenty-five feet, while the one-and-a-half-storey dwelling had three bedrooms.

A fog-alarm building was added to the island in 1956, and in 1962, diesels generators were installed to electrify the lighthouse, fog alarm, and dwelling. Urban Construction was given a $25,348 contract in 1964 to build a second one-and-a-half-storey dwelling for the island and raze the original lighthouse, which was still being used as a dwelling. Commercial power was extended from the west end of the island to the east end, where the lighthouse stands, in 1967.

Lynne Wolfe grew up in LaHave, where she could see Moshers Island from the schoolhouse window. She yearned to visit the island some day, but many of her childhood dreams were disrupted when her father was killed in a car accident when she was eleven. She married Ingram Wolfe in 1960 at the age of fifteen, and a year later, they moved to West Ironbound Island with their newborn daughter to take charge of the lighthouse there. They were only given a temporary contract as automation of the lighthouse was being discussed, but they remained on the island for five years.

In 1966, Ingram and Lynne moved to take charge of the lighthouse on Moshers Island. Lynne recalled life on the island she had dreamed of visiting in an interview for Saltscapes magazine:

Moshers Island, four times the size of West Ironbound, had a large expanse of grass that needed mowing regularly, despite the goats that were pastured there. That added to the choresand only the baby goats were friendly.

This new island housed a foghorn that had to be manned 24-7 when the weather warranted. When Ingram was off the island, I became the relief keeperall the responsibilities mine. When I had to attend the foghorn at night, I spent my time baking, cleaning and ironing, which I found soothing.

In 1971, I became pregnant with our third child. The night I went into labour with Marianna, I spent the early part of the evening scrubbing up puddles left by a new puppy, and then I ironed until midnight. We contacted Ingrams sister by CB radio and floated through the ice to meet her at the wharf in Dublin Shore. Marianna was born in Bridgewater at 3:58am the same day.

I struggled to be both mother and teacher to Heather and John, so the year Marianna was born, the other two went to school on the mainland, in Petite Rivière. They ended up boarding separatelyaway from home and familyfrom Sunday until Friday night. When Marianna was school age, I contacted 47 families before I found someone willing to accept the responsibility of caring for her.

No one coped very well. Everyone in the family learned to hate Sundaysstill do. Boarding the children off the island was one of lifes learning experiences for all of usnot a nice oneone that I would never do again. I would move to the mainland with them instead.

The Wolfes lived on the island for twenty-five years, and only left when the station was automated and de-staffed. During their tenure, the current lighthouse, a round, fibreglass tower, was placed on the island in 1989. The Coast Guard tipped the square, wooden lighthouse onto its side on March 12, 1990 and burned it.

Mosher Island Lighthouse Preservation Society was formed in 1996 to save the remaining buildings at the station, but when it was unable to gain control of the site it disbanded. Two keepers dwellings, a landing pad, a boathouse, and a foghorn remain on the island along with the lighthouse, but all of the wooden structures are showing signs of serious neglect.

For a larger map of Moshers Island Lighthouse, click the lighthouse in the above map.

The lighthouse is best seen by boat.