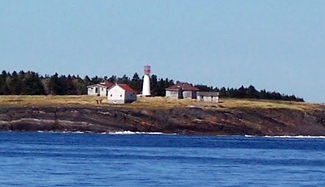 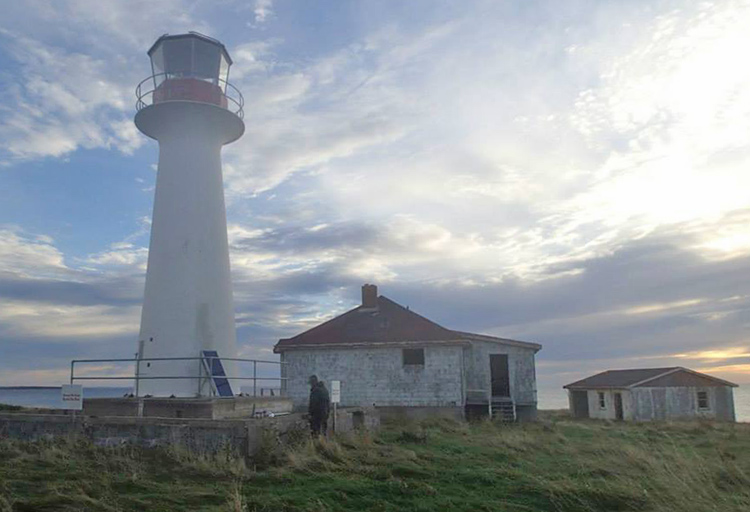 Cross Island serves as a breakwater for Lunenburg Bay and divides the approach to Lunenburg Harbour into channels: the wide-open south channel, and the more treacherous north channel. Citizens of Lunenburg first petitioned the House of Assembly of Nova Scotia for a lighthouse on Cross Island in 1826. While the need for a beacon to aid the growing trade of Lunenburg Harbour and to light the dark gap between the lighthouses on Sambro Island and Coffin Island was acknowledged, it took repeated appeals before a committee was appointed in 1828 to examine the island and estimate the cost of the lighthouse. Although the three-man committee was charged by Sir James Kempt, the Lieutenant Governor of Nova Scotia, to personally visit the island, they were provided no means to do so. Instead, the men were forced to consult mariners intimately acquainted with that section of the coast, and their opinions convinced the committee that the lighthouse would prove extremely useful to all persons concerned in navigation, and the Trade of the Province in general.

The sum of £750 was appropriated for the lighthouse in 1829, and work on the dwelling and tower began in 1832. Additional funds had to be appropriated to complete the lighthouse and provide a lantern of iron rather than wood. An examination of the completed lighthouse in 1833 found the carpenters work to be strong but very roughly executed and that the masonry work was wretchedly bad. The windows in the tower were set with the slope of the building rather than vertically and were all placed on the south side, which was most exposed to rainstorms, rather than being distributed at the points of a compass. The dwelling was so poorly finished that daylight could be seen under the eaves when inside it.

The contractor promptly corrected the deficiencies in the buildings on Cross Island, but one problem remained: how to distinguish the light at Cross Island from the fixed white light at Sambro Island and the revolving white light on Coffin Island near Liverpool. A five-foot-wide St. Andrews Cross (basically an X) was painted on the tower to distinguish it from the tower on Sambro Island during the day. Some say this is how the island got its name, but it was known as Cross Island well before this. A red light was proposed, but the option that received more support was to build a second tower on the island as had been done at Cape Ann in the United States. The lantern room was removed from atop the tower in 1835 so it would be less likely to be confused with Sambro Island Lighthouse, and it was then actually taken and placed atop Sambro Island Lighthouse, as it was a superior lantern room.

After years of debate, it was finally decided that the tower on Cross Island would display two lights: one in the lantern room that was momentarily darkened each minute and one thirty feet lower on the tower that was a fixed light. The lighthouse was painted red to distinguish it in daytime from the white towers at Sambro Island and off Liverpool. The light was placed in operation on December 1, 1839, with Jacob Smith serving as its first keeper. Jacob Smith died in 1869. His son took charge of the light for a short period before Benjamin Rynard was appointed keeper.

A report in 1875 described how the flshing light in the lantern room was produced:

Eight A lamps with 12-inch reflectors are placed on a zinc-covered table in the centre of the lantern, a cylinder of sheet tin is worked by machinery below and is made to descend at intervals covering and obscuring the entire circle of lamps, causing a sudden eclipse and rising again, and thus producing, a flash of light. The light shews steady for forty-five seconds, then by the fall of the tin cylinder is obscured for fifteen seconds, which on suddenly rising produces a brilliant flash. The machinery is old and requires considerable repairs, and it would be well to have a new one made and the present one repaired and kept as a duplicate.

New deck beams and a new deck were installed atop the lighthouse in 1877 to support a new larger lantern room that had a diameter of ten-and-half feet. A Neptune foghorn and associated boiler were installed on the island in 1879 to aid mariners in times of limited visibility. The horn gave a ten-second blast every ninety seconds when needed. In 1885, C. Albert Smith of Lunenburg built a new dwelling on the island for the light keeper and fog alarm engineer. The characteristic of the foghorn was changed from a ten-second blast to a twenty-second blast in 1895.

In 1901, a new catoptric illuminating apparatus, constructed in the Department of Marines workshops in Ottawa for $500, was installed in the lantern room to produce a light with the following characteristic: three bright flashes, with intervals of fifteen seconds between their points of greatest brilliancy, followed by an eclipse of twenty seconds. This change allowed the lower light, which was displayed from a bow window, to be discontinued.

James W. Smith built a new wooden fog alarm building on Cross Island in 1910 at a cost of $1,945 to house a three-inch duplicated diaphone plant with twelve-horse-power-engines that the Canadian Dog Signal Company of Toronto supplied for $4,700. The illuminating apparatus was changed yet again in 1912, when a fourth-order dioptric lens, lighted by petroleum vapour burned under an incandescent mantle, was mounted in the lantern room. The new lens produced the following signature every thirty seconds: light eighteen seconds, eclipse three seconds, light six seconds, eclipse three seconds.

On May 19, 1960, a fire started by an oil furnace destroyed the original Cross Island Lighthouse, the fog alarm building, and other structures on the island. An aluminum framework tower, that rose to a height of sixty-seven feet, was built to serve as the new lighthouse. This tower served until 1980, when the present fibreglass tower was placed on the island.

Keeper Wilfred McSheffery and his wife Adalene moved to Cross Island in the 1977, after having served on Liscomb Island and St. Paul Island. Wilfred had a civil service job up until 1964, when he was laid off and had to seek other employment. He saw an advertisement for a light keeping job and thats how he and his wife ended up living on islands for the next sixteen years. After three years on Cross Island, Wilfred reached the mandatory age of retirement, sixty-five, and the McShefferys had to leave the island.

They kicked us off! We had no choice. They didnt want us!, Adalene jokingly said about having to leave Cross Island. I wasnt happy about it, but what could you do? Youre finished, youre not welcome anymore. Theres not much you can do about it, is there? Adalene missed her island life. When youre by the water, you never see the same thing two days...Oh God, I can see water on TV and get homesick! I still would go back to it if I could. Tomorrow.

Keeper George Locke and his wife Ethel lived at Cross Island Lighthouse from 1981 until the station was automated in July 1989.

When Chris Mills, himself a former lighthouse keeper, asked Adalene McSheffery what she thought about automation, she replied: I think its a crime. I think it is a sin...Well, I think Id feel the same way the fishermen did. You know, I dont know just how youd say it, but I think if I was a fisherman or anybody at sea, that I would have a more secure feeling if I knew there was somebody on that island, instead of just an electric eye. Someody with a brain.

For a larger map of Cross Island Lighthouse, click the lighthouse in the above map.