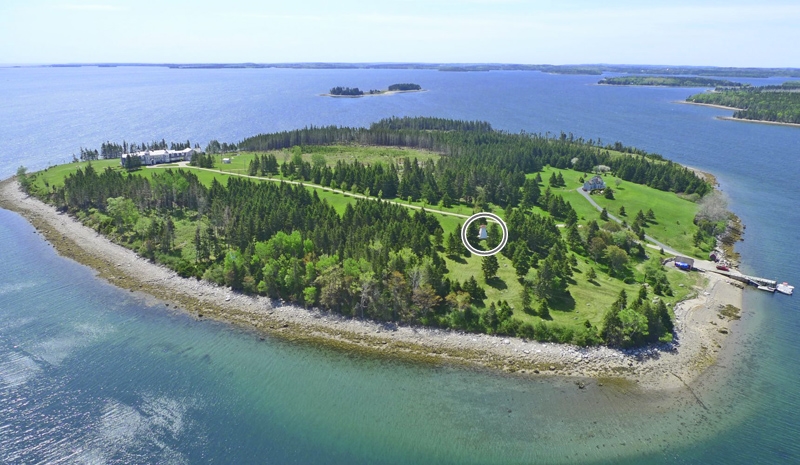 Mahone Bay is noted for its numerous islands and the picturesque villages found along its shores. French settlers were the first Europeans to arrive in the area, and they appropriately named the spacious bay La Baye de Toutes Iles (The Bay of Many Islands), but the name was subsequently changed to Mahone Bay.

Lighthouses were placed on East Ironbound Island and Pearl Island, two of the outermost islands in Mahone Bay, in the nineteenth century, to mark entrances to the bay, but it was still tricky to navigate between all the inner islands.

On September 28, 1914, the Department of Marine and Fisheries awarded a $975 contract to N.J. Robinson of Chester to build two wooden range towers on Kaulbach Island. The cost for inspecting the towers and installing the lighting apparatuses amounted to $477.65, and $85 was expended for the purchase of the sites.

The range lights were positioned on Kaulbach Island in such a way that once mariners safely navigated past Big Tancook Island, they could align the lights (or towers in the daytime) in order to safely pass between Young Island and Bella Island to reach the anchorage at Martins River.

The following Notice to Mariners was published to announce the establishment of the new lights:

The Canadian Government has given notice that on January 1, 1915, range lights would be established, without further notice, on the northeastern end of Kaulbach Island.

Front Light  The front light will be a 5th-order, dioptric, fixed white light of 175 candlepower, visible 8 miles from all points of approach by water, exhibited 36 feet above high water from an enclosed, white, wooden tower, square in plan, with sloping sides, surmounted by a square lantern. The height of the tower from its base to the top of the ventilator on the lantern is 22 feet.

Rear Light  The rear light will be a fixed white catoptric light of 1,250 candlepower, visible 6 miles in the line of range, exhibited 68 feet above high water from an enclosed, white, wooden tower, square in plan, with sloping sides, surmounted by a square lantern, erected 370 feet 268° from the front light. The height of the tower from its base to the top of the ventilator on the lantern is 22 feet.

James Heisler, who owned Kaulbach Island and sold the land for the towers to the government, was hired as the first keeper of the range lights at an annual salary of $230. He served until 1940, when his son Reuben C. Heisler was made keeper. The lights became battery operated in 1960, and Reubens title changed from keeper to caretaker, which had a salary of just $100 a year. A submarine cable brought commercial power to the island in 1969, allowing the power of the lights to be greatly increased.

Around 2006, an American family built an 11,000-square-foot house on Kaulbach Island known as the Osprey Nest, which boasts eleven bedrooms, nine bathrooms, and ten fireplaces. The island, which also comes with a three-bedroom guest house and a beach house, was placed on the market for $9.5 million in 2010. In 2019, the asking price was $5.5 million.

The uncle and aunt of the couple who were serving as caretakers of the island estate in 2018 were Keeper Reuben Heisler and his wife Florence. The Heislers sold the island for $11,000 in the early 1970s and moved ashore. The island has changed hands a few times since then.

For a larger map of Kaulbach Island Range Lighthouse, click the lighthouse in the above map.

The lights are owned by the Canadian Coast Guard. Grounds open, tower closed.