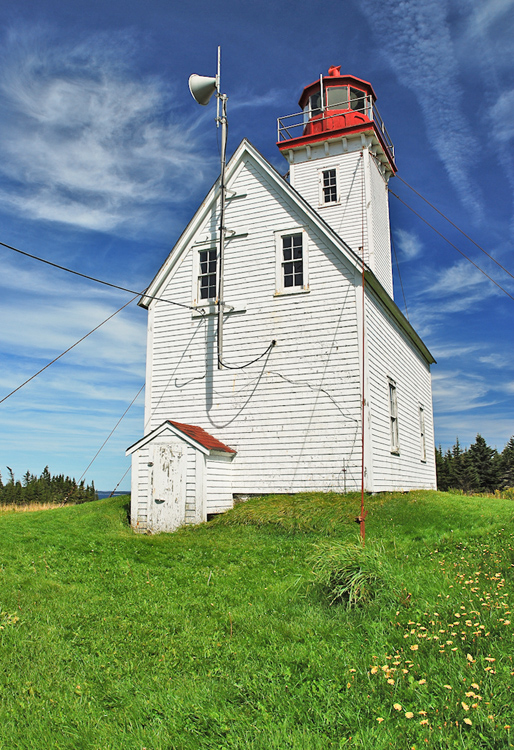 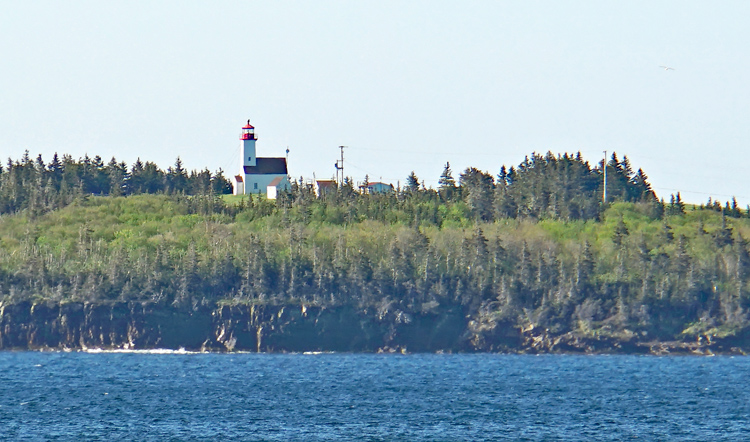 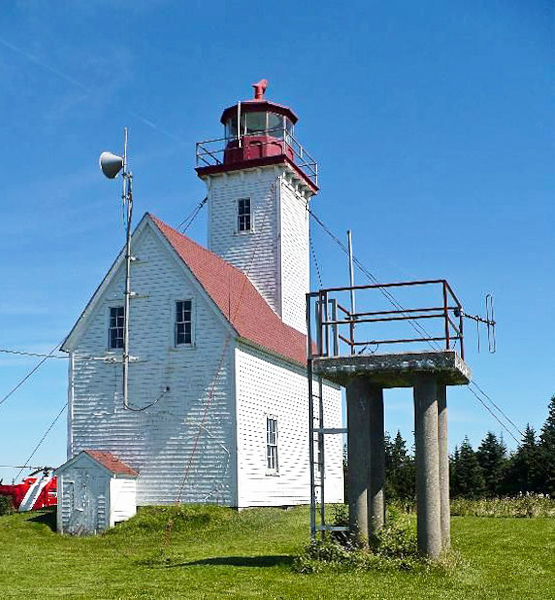 Keeper Edward Young had just come downstairs from trimming the wicks in the lantern room and was smoking his pipe on the evening of January 3, 1870, when he saw a bright flash through the window. He ran upstairs and found the lantern room ablaze, with flaming oil running across the floor. Keeper Young threw three buckets of water on the fire, before realizing he had to flee the lighthouse to save his life. In just a few minutes, the entire lighthouse was destroyed along with all of the keepers possessions. Lightning was ruled the cause of the fire. As two horizontal lights, spaced twenty feet apart, were displayed from the lighthouse, it was impossible to exhibit a temporary light of the same character, so mariners were warned that the light would be extinguished until further notice.

Rather than rebuild on the southeast end of the island, the Department of Marine exchanged the parcel it owned for one at the highest point of the island. This site had originally been considered for the lighthouse, but the owner of the surrounding land refused to allow the trees on his property to be cut down so they wouldnt obscure the light. To overcome this issue, a taller lighthouse than would otherwise have been necessary was built. Hopps and Brown of Lunenburg built the second lighthouse for $1,200, and it was placed in operation on January 5, 1871.

The lighthouse consisted of a rectangular one-and-half-storey dwelling with a square tower rising from one end. Several of these church-like lighthouses were finished in Nova Scotia in 1871, including ones at Apple River, Ingonish Island, Main-à-Dieu, and Pugwash, but East Ironbound Island is the only one that remains standing.

After a gale on October 12, 1872 caused the lighthouse to shift from its foundation, four wire-rope stays were run between two sides of the tower and eye-bolts anchored in rock to steady the skinny structure. An array of lamps and reflectors took the place of the fifth-order lens in the lantern room in 1873 to produce a stronger light, and the following year, a larger lantern room, with a diameter of seven-and-a-half-feet, was placed atop the tower to provide room for the use of even larger reflectors.

Following the death of Edward Young, Uriah Young was placed in charge of the lighthouse on February 15, 1884. Uriah Young remained at the lighthouse for thirty-seven years, before retiring in 1921 at the age of seventy. He has he honor of being the lights longest-serving keeper.

In 1892, a hand-powered foghorn was given to Keeper Young so he could answer steamers whistles in thick weather. A fourth-order Fresnel lens was installed in the lantern room in 1912. In 1929, East Ironbound Island Light was changed from a fixed white light to an unwatched, automatically occulted, acetylene light, and the hand foghorn was discontinued.

The decision to de-staff the lighthouse was revoked after just one season, and Edward Finck was appointed keeper in 1930. Three generations of the Finck family cared for the light until it was automated in 1990. Around 1943, Edward Fink became too crippled to carry the oil up to the lantern room so his wife Violet assumed lightkeeping duties until 1955, when their son Charles was officially appointed keeper of the light. As a young boy, Charles and his five siblings had to travel six kilometres by boat each day to be educated at a one-room schoolhouse on Big Tancook Island. Paul Finck took over care of the lighthouse from his father in 1980 and served until the role of keeper on East Ironbound was eliminated a decade later. Violet Finck passed away on December 18, 2002, just twenty-one days shy of her 109th birthday.

East Ironbound Lighthouse was designated a Recognized Federal Heritage Building in 2006, in part, for:

The lighthouse still has not been declared a Heritage Lighthouse, as over twenty other lighthouses in Nova Scotia have, but as a one-of-a-kind lighthouse it certainly merits the additional protection provided by that designation.

For a larger map of East Ironbound Island Lighthouse, click the lighthouse in the above map.