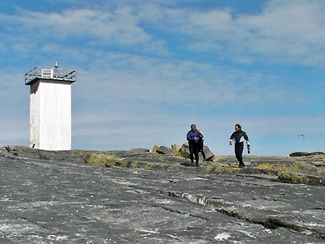 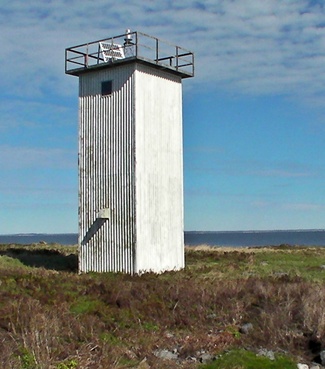 Nova Scotia is blessed with an abundance of islands, especially along its rocky, Atlantic shoreline. As they number more than 3,800, it isnt surprising that some islands share the same name. There are currently two Green Island Lighthouses in the province, one off Yarmouth and one near Isle Madame, but there could be four, if the names of islands hadnt changed over the years. Both Country Island, near Port Bickerton, and Pearl Island, near the line separating Mahone Bay and Margarets Bay, were called Green Island when lighthouses were first established on them. A lighthouse was built on East Ironbound Island to mark the eastern entrance to Mahone Bay in 1867, and in 1873 a lighthouse was placed on Green Island, roughly seven kilometres southeast of East Ironbound Island to provide another light to help mark Mahone Bay and Maragarets Bay. The Annual Report of the Department of Marine has the following information on the new Green Island Lighthouse:

A new lighthouse was recently erected at Green Island, Margarets Bay, County of Lunenburg, and is situated on the south point of the Island. It shews a revolving red and white light, flashing every minute and a half, and making a complete revolution every three minutes. The light is elevated 59 feet above high water, and can be seen at a distance of 15 miles. It was first exhibited on the 15th September last. The apparatus is catoptric, having two faces, with three circular burner lamps and 20-inch reflectors in each face. Mr. Albert Pearl was appointed keeper on the 29th December last at a salary of $500 per annum. The amount expended in erecting this light up to 31st December last was $2,950.29.

Alexander Sinclair built the lighthouse and oil shed for $1,484, while the rest of the expenditure was primarily for the lighting apparatus. The lighthouse consisted of a white, square, wooden tower with an attached dwelling and was topped by a twelve-sided, wooden lantern with a diameter of ten feet.

Albert and Caroline Pearl had four daughters, when Albert was made keeper of Green Island Lighthouse, and they subsequently had four sons. Mather Pearl, the oldest son, succeeded his father as keeper in 1908, and Mather was in turn succeeded by his son Albert in 1941. The three generations of keepers from the Pearl family cared for the light up until one year before it was automated, so it is fitting that the name of the island was changed to Pearl Island in 1914.

In 1874, Keeper Albert Pearl was given $100 to help him build a boathouse and slip on the island. The following year, he blasted out a good landing on the rocky shore, and laid down skids to haul boats up to the new twenty-four-by-twelve-foot boathouse. Also in 1875, a porch was added to the lighthouse as a protection in rough weather, and a new floor was laid in the cellar.

As it was located on the southern tip of the island, the lighthouse was exposed to the fully furry of the Atlantic. Keeper Pearl suggested that stays be attached to the lighthouse in 1874, and brought up the matter again in 1877, complaining that the tower vibrated in storms and likely interfered with the operation of the revolving light.

In 1928, Hedley N. Pyke of Lunenburg built a new combined lighthouse and dwelling on Pearl Island for $5,765 when Mather Pearl was keeper. The previous tower was torn down, but the dwelling portion of the original lighthouse was retained as a storehouse. The new lighthouse featured a white, square, two-storey dwelling whose hipped roof was topped by a lantern room. Pyke had built a similar lighthouse at Medway Head in 1927.

An inspection of the station in January 1962 found that the overall condition of the buildings was poor. The boathouse was rotten, and the former dwelling that served as a storehouse was in unsatisfactory condition. The living conditions in the lighthouse itself were so bad that Keeper Albert Pearls family refused to stay there, so he was left alone on the island. Automation of the light was recommended as soon as possible.

On January 21, 1962, Violet Finck, mother of Keeper Charles Finck on East Ironbound Island, noticed that the light on Pearl Island was out and asked her son to go investigate. Charles took along a couple of others, and when they entered the lighthouse on Pearl Island, they found a partly eaten meal on the table, but there was not sign of Albert Pearl. The body of Albert Pearl was never found, and his disappearance remains a mystery.

David Barkhouse was assigned to replace Albert Pearl. Jean Barkhouse wasnt too excited about life on Pearl Island, and she waited until school was out before moving their three kids out to the island in the summer of 1962. During a hurricane, the Barkhouse children sat glued to the ocean-facing windows watching mountainous waves crash onto the island and send water swirling around the lighthouse. Jean was pregnant at the time and tried to bake bread to distract her from the battering the house was taking. It didnt work. She finally retreated upstairs to lie down and escape her childrens excitement.

Dave was soon transferred to Georges Island in Halifax Harbour, and in November 1963 the light on Pear Island became unwatched.

In 1973, J.L. Nichols Contracting of Bedford was hired to demolish all structures on Pearl Island and build the current tower. This square, steel-framed, tower is elven feet square, thirty feet tall, and clad in aluminum siding. A solar-powered light is displayed from the flat-topped tower.

For a larger map of Pearl Island Lighthouse, click the lighthouse in the above map.

Pearl Island lighthouse is best seen from the water. Kayaking trips to the island can be arranged with NovaShores Adventures.