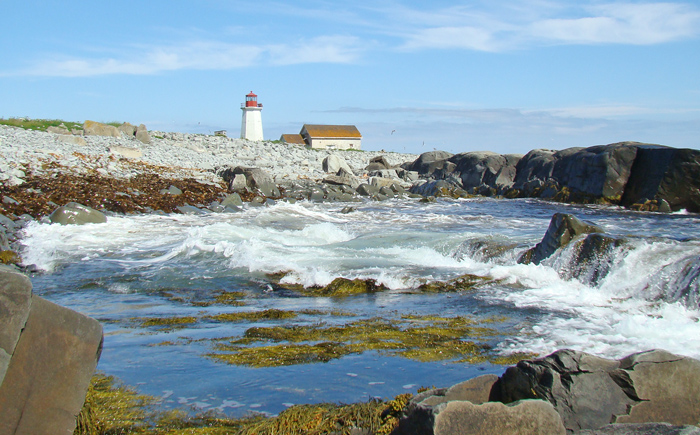 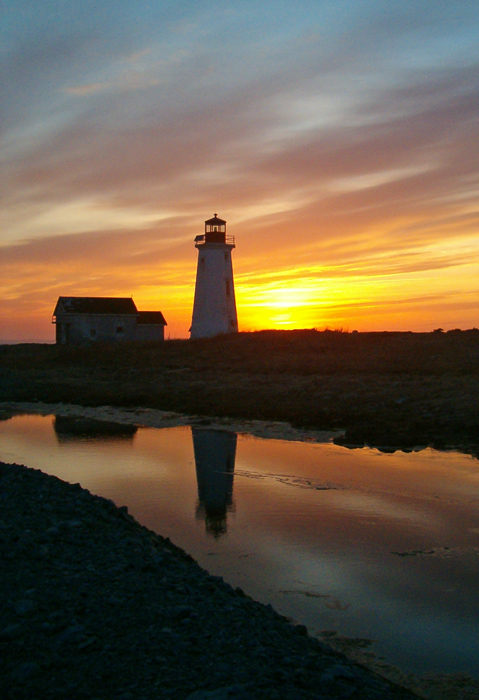 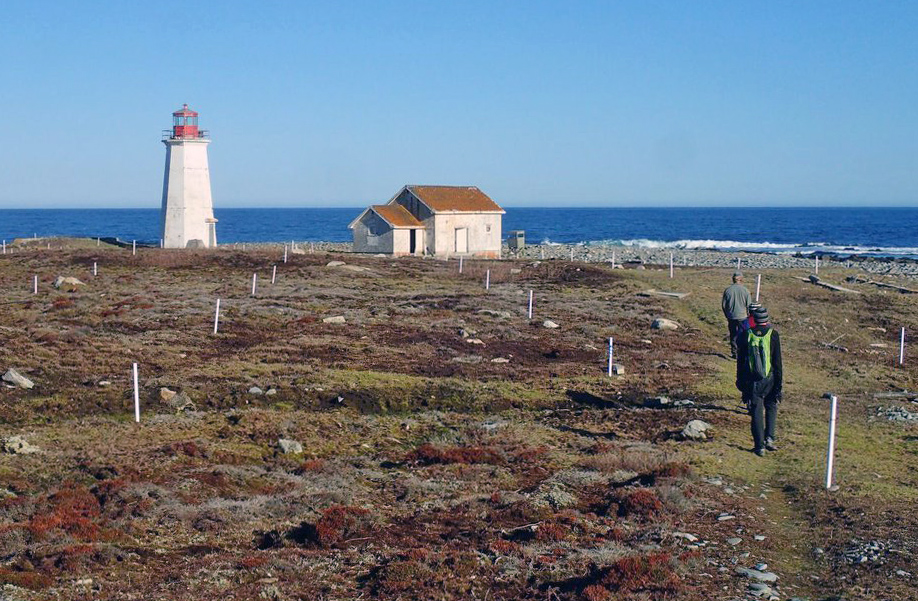 Country Harbour is a sixteen-kilometre-long inlet on the northeast shore of Nova Scotia that has been home to farming, gold mining, logging, and shipbuilding over the years. Today, the area is sparsely populated, and many of the visitors to Country Harbour are simply passengers on the cable ferry that crosses the inlet, linking Port Bickerton with Isaacs Harbour. Just offshore from the inlet are a trio of islands: Harbour Island, Goose Island, and Country Island. Country Island was formerly known as Green Island, and, being the outermost of the three islands, was a natural location for a lighthouse.

In 1865, John H. Kendrick visited all of the lighthouses in Nova Scotia east of Halifax, and in reporting on them, noted the following in a section titled General Remarks:

A few more Light Houses are still necessary on our coast; and it is important in my opinion that one should be erected on Green Island, off Country Harbour. The dangers of this part of the coast are too well known to need description. A light on this Island is not only highly necessary for a coast light, but would be a real service for a harbour light, being a good guide into Country Harbour, one of the finest harbours in the Province.

The lighthouse on Green Island was not built before Nova Scotia became part of Canada in 1867, but the newly formed Department of Marine soon took note of the need for a light there. A lighthouse was built on the island in 1872 and would have been put in operation during the fall of that year if the lantern room hadnt been so damaged in transit from Montreal that it had to be returned to the manufacturer. A new lantern room was sent to the island in later that year, but the light was not put into operation until May 1, 1873. James McDonald built the lighthouse for a contract price of $1,295, while the lantern room cost $373. William B. Foster was appointed the first keeper of the light at an annual salary of $400.

The lighthouse was placed on the south point of the island and consisted of a square, twenty-eight-foot-tall tower attached to a small dwelling for the keeper. Four lamps, set in twenty-inch reflectors, produced a fixed white light at a height of fifty-one feet above the sea. Besides serving as a coastal light, the lighthouse also served as a guide into both Country Harbour and Fishermans Harbour.

On August 24, 1873, a hurricane, known as the Great Nova Scotia Cyclone, caused heavy damage along the Atlantic Coast of Nova Scotia and killed 500 people in the province. On Country Island, a small shed at the landing was destroyed, the road to the lighthouse from the landing was made impassable by the number of trees that were blown down and fell across it, and a large quantity of plaster in the lighthouse was shaken lose. The foundation walls of the lighthouse were quickly repaired, the plastering renewed, and wire rope was used to brace the tower for future hurricanes. A new combination store and boat-house was also built at the landing.

Keeper William Foster died in 1875, and James Alexander Foster, his son, was appointed keeper in his stead. A new lantern room, with a diameter of nine and two-thirds feet instead of six feet, was installed atop the tower along with a new lighting apparatus in 1877. The new apparatus had two frames, one above the other, that each supported seven lamps that were supplied oil from two tin reservoirs in each frame. In order to support the larger lantern room, the upper deck of the tower had to be extended.

Keeper James A. Foster died in 1883 and was replaced by Spencer H. Giffin, who would serve twenty years on the island. In 1884, the lighthouses stone foundation was torn down and rebuilt with cement mortar, and an addition was made to the dwelling to provide more room for the keeper and his family. To prevent the ten panes of glass from cracking so frequently, the putty which held the glass in place in the lantern room was removed and rubber strips were installed instead.

In 1908, Country Island Lighthouse was one of seven white lighthouses in Nova Scotia that were painted with red stripes or bands to make them more conspicuous when snow was on the ground. The light was changed from fixed white to a flashing white light through the installation of a new revolving catoptric apparatus in 1910. The signature of the new light was a pair of flashes separated by nine seconds and followed by twenty-seven seconds of darkness. The new lamps burned petroleum vapour under an incandescent mantle.

After fifty-five years of service, the original lighthouse was replaced in 1927 by a new one built in a style that was frequently used at the time: a square, two-storey dwelling with a lantern room centered on its hipped roof.

Keith Guptill had been making a living as a dragger fisherman for several years when he decided in 1959 that he needed to find a different occupation to support his family given the downturn in the fishery. On September 15, 1960, Keith and his wife and six children moved out to Country Island so he could become a lighthouse keeper. Jim Guptill was fifteen years old at the time and was just starting to get really interested in girls when he was uprooted and placed on the island, but he soon adjusted to his new life.

When we went there it was heated by a combination of coal and wood, remembers Jim. It was cold! One of Dads favourite expressions was Man, the crows could fly right straight through this place and not bother them a bit, and until we had a chance to winterize it, it was pretty bad. We had a heavy iron lantern that would shake the house when it was blowin hard. It would just vigorously shake the place as though it were in the teeth of something. It was weird, noisy, and it was dreadful to heat. But we winterized it. Dad was a bit of a stickler on that sort of thing. He had no intention of blowing hot air out through the side of the house. But it was still a dreadful experience to keep warm. We dressed warmly in the winter-time!

By 1961, the second lighthouse had deteriorated significantly, and the construction of a new lighthouse and three separate dwellings was recommended so that the station could be watched around the clock by keepers who only had to work an eight-hour shift. A contract was awarded to Eastern Woodworkers Ltd. for one four-bedroom dwelling, two three-bedroom dwellings, a combined fog-alarm and radio-beacon building, and an octagonal, concrete light tower, along with demolition of the old lighthouse. Work began in November 1963 and was completed in 1965.

Two assistant keepers were needed to serve under Keith Guptill at the new, modern station. Given his experience on the island, Jim Guptill was made one of the assistants even though he was just nineteen. He would marry two years later and continuee to serve under his father until he was transferred to Gull Rock Lighthouse in 1974. With three families living in close proximity on a small island, personality conflicts were expected. Most of the problems were what Jim called barking dog issues which he described as Youre doing things that are interfering with my sleep over here, cmon eh?

When a 400-watt electric horn replaced the diesel engines and compressors that powered the diaphone horn in 1971, the station was reduced to a two-keeper operation. A submarine cable brought commercial power to the island in 1982. While this provided modern conveniences to the keepers, it also made automation possible, jeopardizing the keepers careers. In 1986, the diesel generators and fog detector were moved inside the lighthouse, and on September 29 of that year, Clyde M. Lahey, the last keeper, left the island.

In 2017, Country Island and the surrounding waters were declared a protected area to safeguard roseate terns. Only seventy-three breeding pairs of roseate terns were counted in Nova Scotia in 2016, but the numbers should increase with more land being set aside for their nesting.

For a larger map of Country Island Lighthouse, click the lighthouse in the above map.

Country Island Lighthouse is best seen from the water. Coastal Adventures offers sea kayaking tours that pass by the lighthouse.