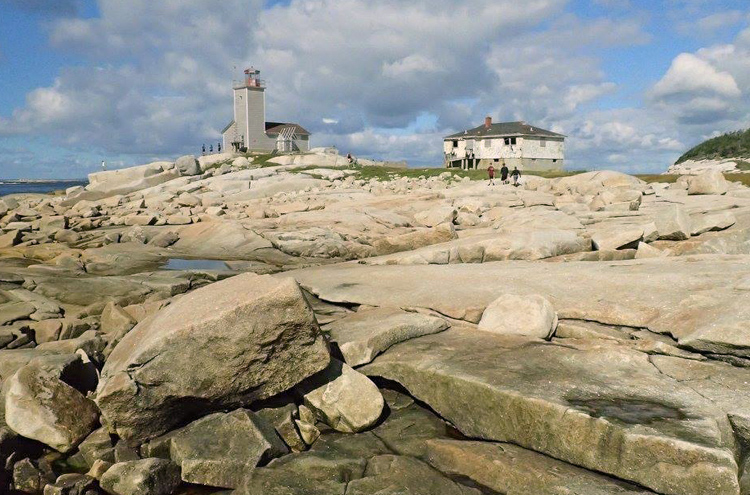 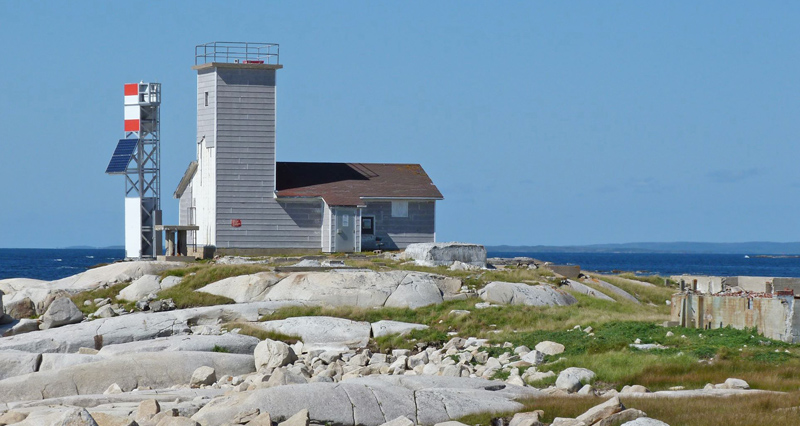 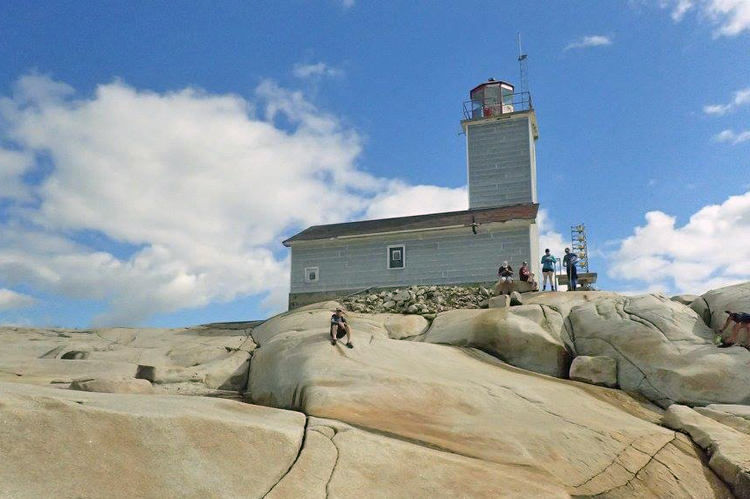 In 1852, P. Frederick Shortland, Commander of the H.M.S. Columbia, shared some general principles he had learned over the previous ten years that he hoped could be applied in selecting sites for lighthouses along the coast of Nova Scotia washed by the Atlantic. These principles included: While no site would likely have all of the above advantages, a site should possess as many as possible. Applying these principles to the coast of Nova Scotia, Commander Shortland noted that the first point that attracted notice was White Head. Here, he wrote, the coast deflects to the northward, towards Canso; it is therefore frequently made by vessels from Europe, and is the point where those passing along the coast, bound to or from the Gut of Canso, Arichat, &c., must alter course. The coast near White Head Island is bold and free from dangers, except two rocks, which generally break about ¾ mile from the shore, one in a south-east and the other in a south-west direction; but a vessel under command, with lead and look-out, can generally approach without danger. There is safe anchorage between the island and the main, and also in White Haven; hence a light is very much required on White Head Island.

The House of Assemble provided 800£ in 1853 for four lighthouses to be built, the fourth of which was on White Head Island. The lighthouse was finished in 1854 and fitted with an apparatus that revolved once every ninety seconds and produced eight flashes during that interval  one flash from each of its eight catoptric lamps. Patrick Dillon, the first keeper, was commended for showing interest and industry in running the station. Not only did Dillon and his family keep everything remarkably neat and clean, but he had also made an excellent landing wharf, built a store near it, and constructed a road from the landing place to the lighthouse. Keeper Dillon and his wife were living in the square structure, which served as both the dwelling and lighthouse, with eight children. William Condon, the superintendent of the Board of Works, recommended in 1857 that an addition be made to the lighthouse, which he said was entirely too small for the purposes intended, but this was not done until 1865. Keeper Dillon did not get to enjoy the improved accommodations for long as he died in 1867 from acute hepatitis. James Patrick Dillon replaced his father as keeper and looked after the light for the next three decades.

The following improvements were made to the station in 1874:

The lantern and lighting apparatus at this important point being old and of a small and improper description, were removed this year and new-ones supplied; the light was not, however, extinguished while the work was progressing.

The light-tower which was square, has had an additional story, ten feet in height and of octagonal form, added to it, closets were made in the angles, fitted with shelves &c., and a new stairway built. An iron lantern having twelve sides and nine feet in diameter, has been erected, and a new and large revolving apparatus put in operation.

The plate glass used is 60 x 30 inches, and the lighting apparatus consists of six mammoth flat-wick lamps with 22-inch reflectors; two spare lamps being kept on hand. About 720 gallons of oil were delivered at this station on 3rd September, and four iron tanks in good order are kept on hand.

The dwelling is attached to the light-tower; and there are two other buildings, one near the light, 24 x 16, used for an oil-store and barn, and another, 24 x 18 feet, at the landing place, half-a-mile distant, to receive the supplies when delivered, and for storing them until they can be taken to the light-house.

The oil store near the light was built this year, having a partition through the centre, the lower floor made of two-inch plank, and the upper floor double boarded; oil benches for the tanks were also added, and all the new work at the station painted.

A galvanized iron chimney was made, leading from the light-room floor to top of lantern, the old windows of the tower renewed so as to correspond with the new ones, and a number of other repairs made to place the building in thorough order. An expenditure of $50 has been made in improving the road, and a like sum in repairing the landing. Scantling, lumber, and shingles for the purpose of building a boat-house have been sent, and the keeper is having the work performed.

A boat has been supplied to take the place of one lost during a heavy gale in 1873. A tank should be built in the dwelling house to secure rain-water, as the keeper is occasionally obliged to fetch it from the mainland.

In 1908, White Head Island Lighthouse was painted with vertical red stripes to make it more conspicuous during the winter when snow was on the ground. Six other major lighthouses in Nova Scotia also received red stripes or bands that year: those at Brier Island, Seal Island, Sambro Island, Beaver Island, Country Island, and Guyon Island.

In 1913, Freeman and Giffin of Isaacs Harbour built a fog alarm building on the island along with a new detached dwelling, an oil store, and a small bridge to link the fog alarm to the rest of the buildings. All this was done under a contract for $6,945.

A class D diaphone plant was installed in the fog-alarm building to power a type E diaphone foghorn. Mariners were notified that the diaphone, operated by air compressed by an oil engine, would be placed in operation around February, 1, 1914 and would give one two-second blast in every twenty seconds. The horn projected from the southern end of the gable-roofed fog-alarm building

Due to its exposed location, closer to the ocean, the fog alarm experienced occasional damage. In 1917, a solid concrete breakwater was built to protect the building. Almon Munroe was placed in charge of the light and fog alarm on White Head Island in 1912. During one storm, surging water kept him trapped inside the fog-alarm building. During a lull, he managed to retreat across the bridge before the fog-alarm building suffered serious damage.

Another ferocious storm struck the island in June 1924 while Keeper Munroe was still on the island. Just before the storm, one of the Munroe boys had left the island to visit the dentist, leaving his father and Lee, his oldest brother, alone on the island. Two hours before the scheduled midnight watch change that night, Keeper Munroe signaled his son to replace him. Almon was sick and vomiting and left to go to bed. Lee faithfully kept the fog alarm running and the light revolving through the night, but had no reprieve at daylight, as the storm carried on for four days. The constant work coupled with anxiety about his father took its toll on Lee. His sister Mary-Ellen later wrote, My brother, tired right down to the bone, exhausted from no sleep, having eaten but little, sat on the step and cried: If the weather doesnt soon clear they will find both of us dead!

When the weather finally did clear, the son on shore returned to the station to find his father deathly ill and his brother at the point of collapse. He turned right around and went back to the mainland to summon the doctor, but his father passed away just as the doctor arrived.

I shall never forget the scene of the arrival of the casket, Mary-Ellen wrote. There it was, a grey boat towing a dory with my fathers casket and the flag at half mast. Almon was just forty-nine; Mary-Ellen was sixteen at the time.

During the winter of 1932-1933, yet another storm caused significant damage to the fog-alarm building. This incident was likely what prompted the construction of a combination fog-alarm building and lighthouse, on the site of the original lighthouse. Now, the keepers did not have to cross the bridge to service the fog alarm.

On December 14, 1964, a storm destroyed the boathouse and carried away 152 metres of plank walkway and several barrels of oil. The stations two dwellings were also damaged, and the two oil stores were pushed off their foundations. It took a year to make all of the needed repairs.

In 1967, a new one-and-a-half-storey dwelling was built, as a second assistant keeper had been assigned to the station. A fibreglass tower was erected on the island in 1970 to display the light, but it proved to be ill-suited for such an exposed location. Keeper Wilfred Conway reported that the tower shook so much that the beacon atop the tower sometimes made complete revolutions even when it was not operating. Four guy wires were run from the top of the tower to the ground in an attempt to brace the tower.

Work began on a new equipment/fog-alarm building in 1972, and the following year, three new generators were installed this concrete-block structure. The keepers tore down the old combination lighthouse and fog-alarm building in 1974. In 1978, a tower was added to one end of the generator building, and the much-damaged fibreglass tower was taken away. The 1913 dwelling was torn down around 1982.

A submarine cable was laid to the island in 1986, and two years later, the station was de-staffed. The stations two dwellings, two storage sheds, and boathouse were declared surplus and offered for sale through Crown Assets. The sheds were quickly sold and removed from the island, but no buyer was found for the dwellings.

In 2018, the fog alarm on the island was discontinued, and a square, skeletal tower was erected near the lighthouse to display a solar-powered light. The lantern room has been removed from the nearby lighthouse, and only the foundations of the dwellings remain now.

For a larger map of White Head Island (Whitehaven Harbour ) Lighthouse, click the lighthouse in the above map.

White Head Island Lighthouse is best seen from the water, but a very distant view is possible from land.