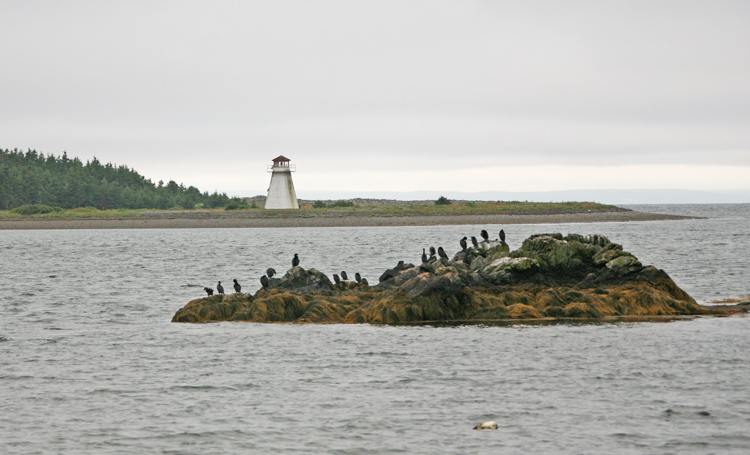 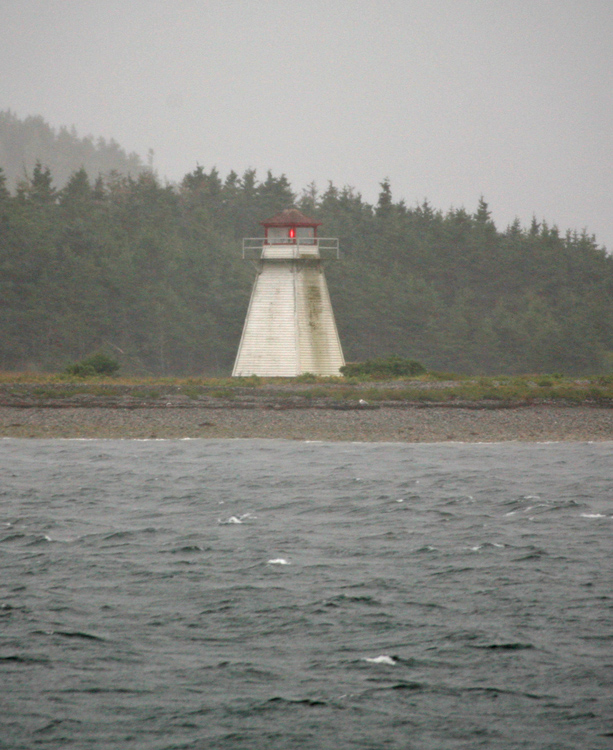 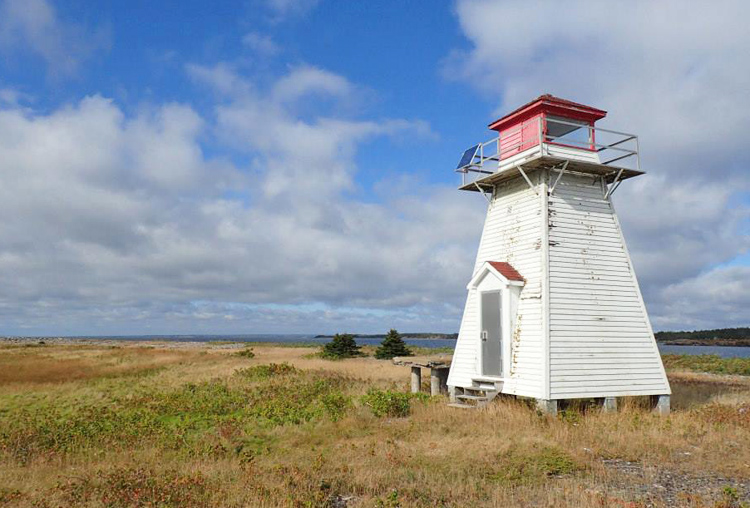 Arichat is the principal village on Isle Madame and is blessed with a fine, natural harbour. In the eighteenth century, Arichat Harbour was a prosperous port boasting five shipbuilding enterprises. Many of the early settlers hailed from Jersey, the largest of the Channel Islands located between England and French. The large, crescent-shaped island that serves as a breakwater for Arichat Harbour is named Jerseyman Island after the Jersey traders who settled there. During the American Revolution, John Paul Jones, the father of the American Navy, attacked Jerseyman Island, pillaging and burning several stores. The inhabitants of Jerseyman Island relocated to Isle Madame after the attack, and the island has remained mainly uninhabited since. The twin cannons on Cannon Look-off, near the large white church in Arichat, are a remnant of this era.

Jerseyman Island is actually a collection of three separate islands. East and West Jerseyman Islands are linked together by a shingle isthmus, and a shoal runs between West Jerseyman Island and the third island in the chain, which lies north of the other two. It was on the northern tip of this third island that a lighthouse was built in 1872 to mark Crid Passage, the northwest entrance to Arichat Harbour. The Department of Marine gave the following description of the newly completed lighthouse that year:

A new fixed red light, on the catoptric principle, was recently erected at Arichat Harbour, Jerseymans Island. It has two No. 1 circular burner lamps, with twenty-inch reflectors, and two mammoth flat wick lamps, and sixteen-inch reflectors. The tower is a square wooden building, painted white. The light was exhibited for the first time on the 10th July, 1872, and Mr. C. A. Boudrot was appointed keeper at a salary of $250 per annum.

F.S. Cunningham built the tower and attached dwelling for the contract price of $1,200, while the lantern room and illuminating apparatus cost $778.95. Charles Boudrot resigned after just one year, and Simon Babin was appointed keeper in his stead. Keeper Babin passed away in 1877, and his son, Simon Babin, Jr., became the next keeper.

A gale in August 1873 damaged the lighthouse and washed the oil store off its foundation. Ballasted cribwork was placed around three sides of the lighthouse to protect it from the sea, and wire rope was run from each corner of the tower to the ground to better anchor it. A ten-foot addition was made to the dwelling portion of the lighthouse in 1889 to provide more living space. George Vigneau was keeper at this time, and he and his wife Celina had three children. By the time of the 1901 Census, four more children had been added to the family so the additional living space must have been greatly appreciated.

In 1896, Keeper Vigneau was given a hand foghorn that he was required to use during thick and foggy weather to answer signals from vessels. In 1902, a seventh-order Fresnel lens, powered by a single lamp, replaced the collection of lamps and reflectors that were being used in the lantern room. A new boathouse was completed in 1912.

Ten-year-old Russ Latimer moved to Jerseyman Island in 1931 with his family, when his father, Irving R. Latimer, was appointed keeper. After reaching adulthood and leaving the island, Russ served as a radio officer in the Canadian Merchant Marine and sailed the waters of the world for over a decade. In an interview later in life, he shared his memories of life on Jerseyman Island:

At the lighthouse, what we saw was what we got  a couple of worthless fixed assets combined with a dwelling, an outdoor two-holer called dunkin, a boathouse, and an oil/coal storage shed to which was attached a lean-to. Blistered paint and a general state of disrepair and neglect abounded. Indeed, it was not an idyllic setting in which to begin a new life.

Nonetheless, as fathers appointment as lightkeeper was confirmed by the Department of Marine and Fisheries (DMF), words were inadequate to describe the elation and the outburst of eagerness and appreciation at having secured a job that would present a monthly income and an opportunity to provide for the family. Father had been wounded in the mud and blood of Flanders at the Battle of Vimy Ridge in 1917. Now, in 1930, he was one of a handful of WWI veterans to be awarded a government posting; a position that rated a monthly income of $68, a princely sum at a time when Canadians struggled with economic depression.

Our first entry into the dwelling, attached to the south side of the tower, revealed a hardly habitable shack. Rough, bare wooden floors, windows with cracked panes and frames sealed with multi-coats of paint and wall paper that hung loosely from the slanted walls greeted us, while steep, narrow ladder-like stairs serviced the four-storey lantern tower. By summers end though we had made at least a small impression toward transforming a house into a home. Through the marvel of Eatons catalogue and their Home Lovers Club, mother was able to procure necessities like floor linoleum, curtains, bedding, blankets, and winter clothing. But, in the beginning, the only practical feature I remember seeing in the lighthouse dwelling was a hand operated water pump that drew rain water from a cistern that was located in the basement. There was no electricity, telephone, plumbing or radio, and neither was there a procedure in place for signaling an emergency communication to the mainland.

Father taught us the art of splitting, salting and drying codfish and building wooden lobster traps. We did considerable sailing under a sprit-rig and sails that mother stitched from used flour bags. Loneliness and boredom were also obviated by an endless routine of daily chores which required attention in order to eke out a mere existence.

Excitement abounded during the month of August 1931 and each summer thereafter with the arrival of the CGS Lady Laurier, the DMF supply ship. Our one-year supply of landed inventory consisted of three drums of kerosene, a broom, mop, large bundle of cleaning rags, cans of Bon Ton brass polish, a stick of jewelers rouge, six bars of Surprise soap, a few gallons of paint, paint brushes, lamp chimneys, wicks, matches and a log book. Quickly, the delivery slip was signed and with a cheery see you next year, the busy men departed.

The visiting inspector expressed delight at the gleaming brass in the lantern and the general state of tidiness of the station. Officialdom seemed to have a thing about polished brass  hence the abundance of Bon Ton and rags. The all-important Fresnel lens, prisms and reflectors were maintained with jewelers rouge and a soft chamois.

Keeper Latimer served long enough to see a new tower and detached dwelling completed on Jerseyman Island in 1950 to replace the original lighthouse. In 1961, a battery-operated foghorn that operated around the clock was activated on the island. While fishermen appreciated the aid, those in town did not.

A submarine cable was laid form the mainland to the island in 1972 to supply the lighthouse with commercial power. Six years later, in 1978, the station was de-staffed after the boathouse was repurposed as an engine room for a diesel generator that would operate the light during power outages. The old keepers dwelling was declared surplus in 1980 and removed from the island.

By the summer of 2017, Jerseyman Lighthouse had deteriorated to the point where the Coast Guard felt it had to be replaced. The wooden tower was toppled over in August 2017, and soon a new concrete foundation was poured, and a new tower was put in place. The replacement tower was constructed in four sections, which were transported from Dartmouth to Arichat. On September 25, a Coast Guard helicopter lifted the sections, one at a time, out to Jerseyman Island where they were assembled atop the concrete pad. The third Jerseyman Island Lighthouse closely resembles the tower it replaced and is expected to require very little maintenance for twenty-five years.

For a larger map of Jerseyman Island Lighthouse, click the lighthouse in the above map.

The lighthouse is best seen by boat, but a good view is possible from the eastern end of Veteran's Memorial Drive in Arichat.