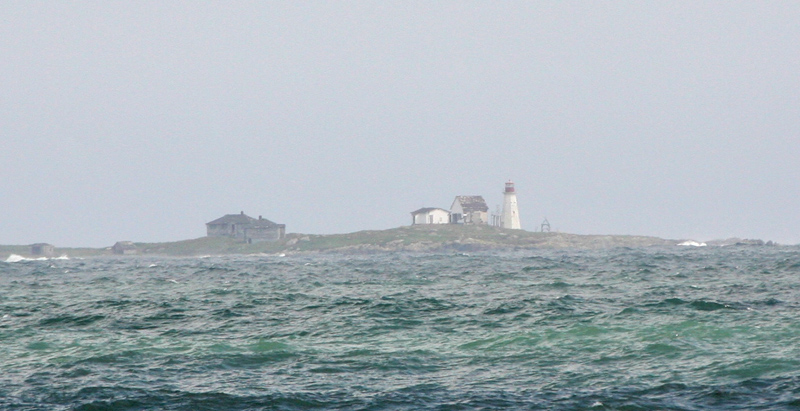 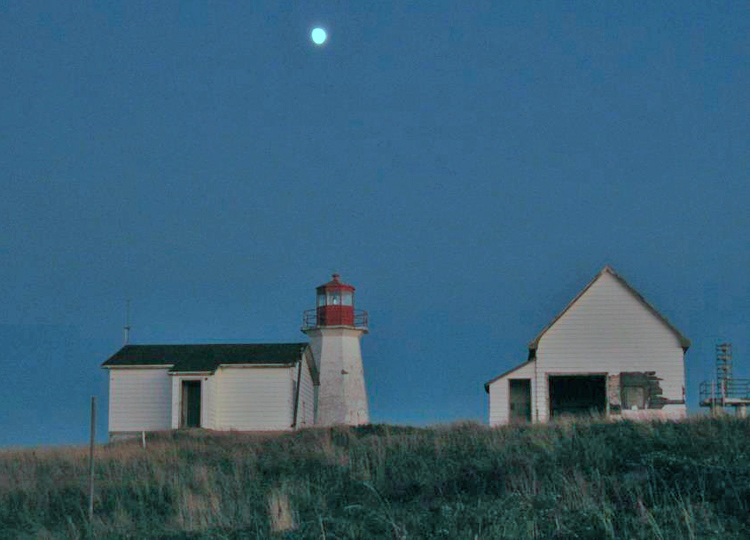 Guyon Island, known earlier as Guion Island, lies off the east coast of Cape Breton between the communities of Gabarus and Fourchu. The low-lying, treeless island is just a mile south of Winging Point, but as the nearest land is a wilderness area, the island seems very isolated. In 1875, John G. Sinclair was awarded a $2,980 contract to construction a lighthouse on Guyon Island with a target completion date of August 1, 1876, but the light wasnt exhibited until 1877. The Department of Marine published the following on Guyon Lighthouse shortly after it was placed in operation:

Revolving led light, attaining its greatest brilliancy every thirty seconds; eight No. 1 circular lamps, with 22-inch reflectors; iron lantern 9 feet in diameter, having twelve sides; plate glass, 60 x 30 inches. The lighthouse is placed about 230 yards from the west end of Guyon Island, Cape Breton County. The building is of wood, painted white, and consists of a square tower 54 feet high, with a dwelling attached.

The light is elevated 74 feet above high-water mark, and was put in operation on 30th June, 1877.

The contract price of the building was $2,980, and the lantern and lighting apparatus was furnished by Mr. Chanteloup, for $2,639.10.

The salary of the keeper is $400 per annum. The consumption of oil is stated at about 1 ¼ gallon per night.

Robert Winton was the first keeper of the lighthouse, and after one year his salary was raised to $450. Keeper Winton served until 1903, and then Joseph W. Hardy took charge of the light.

A combined boathouse and coal shed was built at the islands landing in 1888. In 1908, the white lighthouse was given red stripes or bands to make it more conspicuous when snow was on the ground. A double-flash, long-focus reflector was installed in the lantern room in 1914.

In 1923, a fog alarm building was built on a rocky point south of the lighthouse, and a bridge was built to span an intervening gully. Oil engines and air compressors were installed in the building to power a diaphone foghorn that produce a four-second blast every minute when needed.

A new standard combined lighthouse and dwelling was built next to the original lighthouse in 1927. The standard design of the time was a square, two-storey dwelling with a lantern room centered atop its pitched roof. The dwelling had two vertical red stripes on each of its sides.

In 1936, a new fog alarm building had been built on the site of the original lighthouse, adjacent to the 1927 lighthouse. This would have made tending the fog alarm more convenient for the keepers, but the foghorn blasts would certainly have been more bothersome.

The present reinforced-concrete lighthouse was built on Guyon Island in 1964 along with two, one-storey keepers dwellings. A larger type F diaphone, with its associated engines and air compressors, was installed on the island in February 1966, replacing the type B diaphone. Two months later, in April 1966, diesel generators were placed on the island, allowing a 1,000-watt bulb to be used in the lighthouse instead of an oil-vapour lamp.

An electric foghorn was installed in 1971, and the resulting reduction in workload permitted the stations staff to be reduced from three to two keepers. A submarine cable brought commercial power to the island in 1981, but the station was switched to solar power in 1986 and automated. The dwellings and outbuildings were declared surplus and offered to anyone willing to remove them from the island, but nobody expressed interest.

Darin Guthro kayaked to Guyon Island in 2016 and produced a Youtube video showing the dilapidated condition of the boathouse, two keepers dwellings, and the lighthouse itself.

For a larger map of Guyon Island Lighthouse, click the lighthouse in the above map.

Guyon Island Lighthouse is best seen by boat, but a distant view is possible from land. From Fourchu, travel north on St. Peters Fourchu Road/Fourchu Road for 6.7 km (4.2 miles) and then turn east onto Belfry Road and follow it to its end to get a view of Guyon Island.