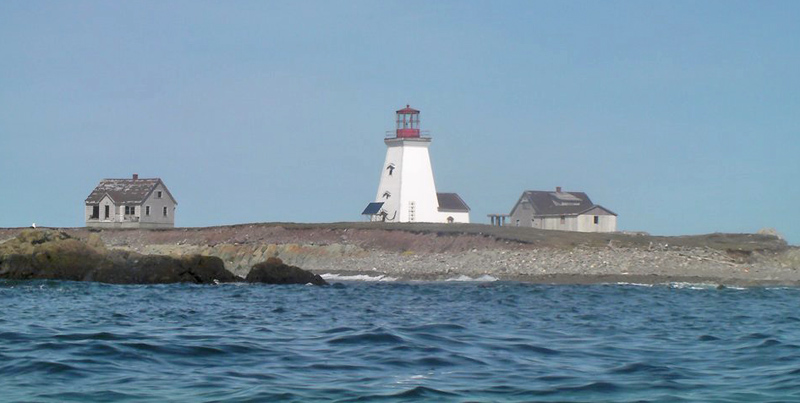 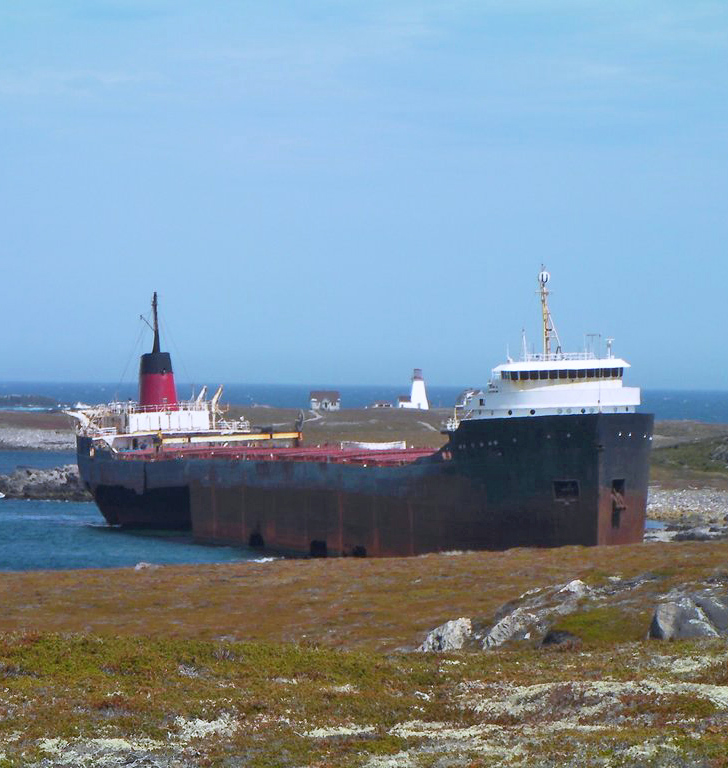 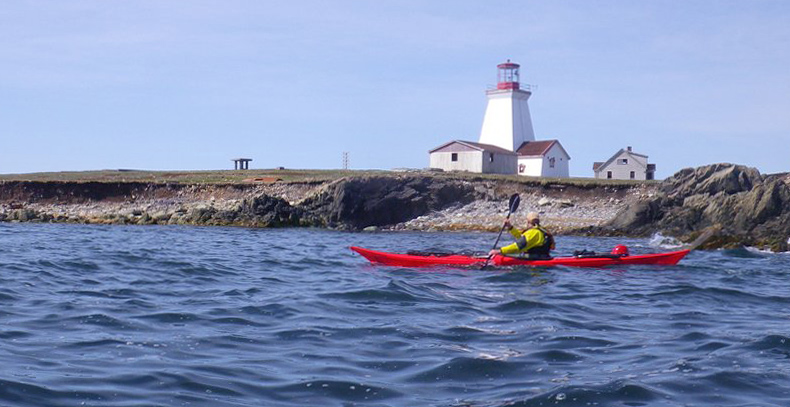 In August 1832, the HMS Leonidas left Halifax bound for Quebec with soldiers, passengers, general cargo, and several tons of copper coins. While rounding the eastern tip of Cape Breton, the vessel struck the outer reefs of Scatarie Island and sank. All aboard the Leonidas were rescued, but many others were not so fortunate when their ships struck the island. In 1834, the brig Fidelity was lost on Scatarie Island along with 283 lives.

Scatarie Island lies off the northeast tip of Nova Scotia, and is the easternmost point in the province. Due to its location, the island is an important turning point for vessels sailing through Cabot Strait, which runs between Nova Scotia and Newfoundland. St. Paul Island, situated roughly twenty-four kilometres off the northern tip of Nova Scotia, is a dangerous obstacle in Cabot Strait that has also claimed numerous vessels.

An appeal for funds for lighthouses to mark both Scatarie Island and St. Paul Island was made to the Imperial Government in 1834, citing the loss of the HMS Leonidas as an example of how the lack of lighthouses was impacting ships from Great Britain. The Imperial Government agreed to cover the cost of constructing the lighthouses, if the governments of Nova Scotia, New Brunswick, Prince Edward Island, and Lower Canada would cover the annual maintenance.

Commissioners from the four provinces met at Miramichi in 1836 and decided that Nova Scotia would be responsible for overseeing the construction of two lighthouses on the north and south extremities of St. Paul Island and one lighthouse on the eastern point of Scatarie Island. In addition to the lighthouses, a humane establishment for assisting shipwrecked persons would be established on each island. The commissioners agreed that, after the lighthouses and humane establishments had been in operation for a year, Lower Canada would contribute 500£, New Brunswick and Nova Scotia would each pay 250£, and Prince Edward Island would add 30£. Each year thereafter, the provinces would contribute a proportionate sum, which added to any unexpended balance from previous years, would amount to 1,030£.

The Commissioners of Lighthouses for Nova Scotia estimated that the three lighthouses and humane establishments would cost a total of 4,500£ exclusive of the lantern rooms, reflectors, lamps, and machinery for the revolving light intended for Scatarie Island.

The lighthouse on Scatarie Island was finished in 1839, and James Dodd was appointed the first superintendent responsible for both the islands light and its humane establishment. The wooden, octagonal lighthouse was equipped with a revolving apparatus that produced a white light that was visible for one minute and then eclipsed for half a minute. Besides the lighthouse, the station also had a dwelling and four outbuildings: a boathouse, a storehouse, a barn for hay, and a cattle-shed.

John McLean served as superintendent from 1861 to 1875. In 1869, he reported that twelve wrecks had occurred on the island during the previous five years. McLean was paid an annual salary of $820, but was required to employ two boatmen for aiding shipwrecks. During the summer of 1869, the stations two boatmen were returning to the island from the mainland when both they and the thirty-six-foot-long boat they were in were lost. The following inventory of supplies at the station in 1871 shows what was kept on-hand to assist shipwrecked persons: Six barrels of flour, four barrels of beef, thirty-nine gallons of molasses, four barrels of No. 1 pilot bread, twenty lbs. of tea, six pairs of blankets, twelve reefers, eleven pairs of pants, twelve shirts, twelve caps, ten pairs of drawers, ten pairs of socks, ten pairs of shoes, besides a newly replenished medicine chest.

A report in 1873 noted that a violent gale blew out the light on Scatarie Island. Keeper McLean had to nail down all the hatches before he was able to re-establish the light an hour later, and he then remained in the lantern room for the rest of the night. The gale blew down an outhouse at the station, and tore off a fishing houses roof that crushed the gunwales on the stations whale boat. Another boat that had been hauled up on the beach for repairs was blown away leaving just the stern attached the rope that was securing the boat.

In 1874, Keeper McLean recommended that a road be built around the perimeter of the island, and that finger boards be placed at various points to indicate the direction to the humane establishment. That same year, Keeper McLean requested that a steam whistle requested for Louisbourg be sent to Scatarie Island instead as it would be of service to a greater number of vessels. A fog signal gun was apparently being used on the island at this time, as an 1878 mentioned that the stations gun was so honeycombed that it was unfit for use, and its wooden carriage was altogether rotten. A serviceable gun, with proper mounting and ammunition, was requested pending the establishment of a steam-powered fog alarm.

The long-awaited steam whistle was finally erected on Scatarie Island in 1881 and placed in operation on November 15 of that year. Malcolm Ferguson was hired as the fog alarm engineer at an annual salary of $400. The whistle gave two five-second blasts each minute with ten seconds between the two blasts. A brick reservoir with a capacity of 20,000 gallons was built to supply fresh water to the boiler that powered the whistle, while a coal shed was built next to the engine-house for storing up to 200 tons of coal for the boiler.

A diaphone foghorn powered by compressed air replaced the steam whistle on October 7, 1905. A rectangular, wooden engine room was added to the main fog-alarm building to accommodate the new equipment, and a small, rectangular building from which the horn projected was placed 125 feet southeast of the main building. The Canadian Fog Signal Company of Toronto provided the diaphone equipment. An oil engine plant replaced the steam plant in 1915. That same year, a new lantern room and a second-order, triple-flash optic were installed atop the lighthouse.

A new double-dwelling was built on Scatarie Island in 1924. In 1953, a new steel lighthouse was erected on Scatarie Island in the form of skeletal tower that surrounded an enclosed central stairway. Similar towers were later used in Nova Scotia at Egg Rock, Cranberry Island, and Jeddore Rock, but all of these lighthouses have since be replaced.

In September 1957, head keeper Raymond Ringer went on vacation, leaving assistant keeper Ronald MacIsaac and a sixteen-year old temporary keeper to care for the station. The sixteen-year-old attempted to start the kitchen range by dousing what he thought were cold coals in the stove with kerosene. The coals turned out to be quite live, and the kerosene exploded into a ball of fire that caught his clothes and the kitchen on fire. Acting head keeper MacIsaac rushed to the scene of the explosion, grabbed a blanket of a nearby bed, and wrapped it around the young assistant to extinguish the flames. As the double dwelling was now on fire, MacIsaac hurried to his half of the duplex to usher his wife and children safety. He had to use a ladder to reach some of the children, who were trapped upstairs. Not long after the last child reached the ground, the entire roof of the dwelling collapsed.

Jim Trim and Charles Wadden, two fishermen who lived on the island, braved heavy seas and forty-knot winds to transport the two badly burned keepers to Main- à-Dieu, from where they were then transported to the hospital in Sydney. The sixteen-year-old substitute keeper died two days later from his burns. Keeper MacIsaacs arms and hands were badly burned, but he made a full recovery.

Jim Trim returned to the island to care for the light until other personnel could be assigned to the station. The Coast Guard ship Lady Laurier was soon dispatched to the island to convert part of the fog-alarm building into temporary accommodations for the keeper and his assistant.

Two one-and-half-storey dwellings were completed for the keepers in 1959. A third dwelling of the same design was added in 1964. Two diesel generators were installed at the station in 1963, allowing an airport beacon powered by a 1,000-watt be installed atop the skeletal tower. In July 1971, an electric foghorn replaced the diaphone, and the following year, the station was downgraded to a two-keeper operation. Declared surplus in March 1977, the spare dwelling was subsequently sold and removed from the station.

The current lighthouse was completed in 1981, and was built to house all of the stations necessary navigational equipment. Three diesel generators and a workshop were found on the first floor, while the second floor contained the fog-alarm equipment and supplies in case anyone was stranded on the island. Switch boxes and equipment for monitoring the light were located on the third floor, and above this was the watch room and the lantern room.

Robert and Gerry Spears arrived on Scatarie Island in 1985, after having spent many years on Flint Island and some time on Sable Island. They ended up being the islands last permanent residents as they witnessed the de-staffing of the station in 1987. More than a dozen fishermen and their families had once called Scatarie Island home. At one time, the island had a school, church, and post office, besides lighthouses on both its east and west ends. The last fishermen left in 1957, leaving the keepers alone on the island.

On September 20, 2011, the MV Miner, a former Great Lakes shipping vessel, broke free of its towing line in rough seas and ran aground on Scatarie Island. A tug was towing the Miner to Aliaga, Turkey, where she was to be scrapped. Immediate efforts to free the vessel were unsuccessful, and it wasnt until just before the one-year anniversary of the stranding that New York-based Bennington Group arrived on the island to cut up and remove the wreckage.

For a larger map of Scatarie Lighthouse, click the lighthouse in the above map.