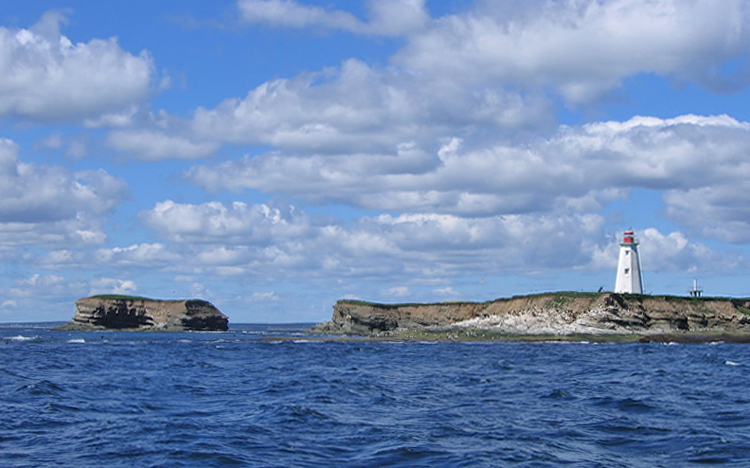 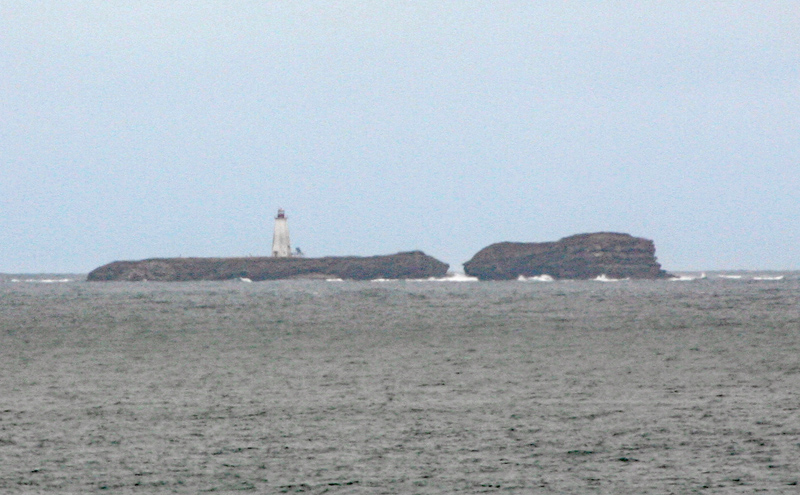 Flint Island lies roughly three kilometres east off Cape Perce on the eastern side of Cape Breton. The nearest settlements are Port Morien and Donkin. The island is actually made up of sandstone, not flint, and erosion has broken it into two pieces. Flint Island Lighthouse was the only one built by the Province of Nova Scotia in 1856, and Keeper George Cann placed the light in operation on November first of that year. The contractor built an octagonal tower along with a detached keepers dwelling, and the work was not entirely completed in 1856 as the tower remained unpainted and the dwelling unfinished in July of the following year. Keeper Cann and his family suffered considerably from cold during their first winter on the island, and almost used up a new cooking stove in their endeavours to keep themselves warm. The dwelling was supposed to be lined with boards instead of plastering, and the needed material was sent to the island in 1857.

As there was no well on the island, Keeper Cann had to catch rainwater in casks. He was told that he would be given four pounds if he succeeded in digging a dwell on the island, but that was likely an impossible task on the tiny, barren island where not even a tree or shrub grew. Keeper Cann earned an annual salary of £60 and was given another £20 as a fuel allowance. Out of this money, he was forced to hire a man to help him as the stations boat had to be hauled up the cliff at the islands one landing place.

The wooden lighthouse on Flint Island was topped by a lantern room that protected a hexagonal illuminating apparatus that had one lamp and reflector on each of its six faces. The apparatus revolved every ninety seconds and produced six distinct flashes during that period. The light served not only as a coast light, but also as a vital aid for coal vessels trading at the ports between Cow Bay and Bridgeport.

A fire destroyed the lighthouse on the night of August 31, 1864. Keeper Cann was unable to explain how the accident occurred, but he managed to keep his job. Refined petroleum and lamps were delivered to the station just six days before the fire, and Keeper Cann had been instructed in the use of the new oil. On the night of the fire, he visited the lamps at 11 p.m. as usual, but then found the tower engulfed in flames at 2 a.m.

The second lighthouse, built in 1865, was very similar to the first, and its light had the same characteristic of a white flash every fifteen seconds.

When Keeper George Cann died on July 12, 1869, his son assumed responsibility for the light until Benjamin Heney was appointed keeper on October 18, 1869. In December 1869, men transporting supplies to Flint Island were carried out to sea and for nine days suffered exposure before reaching shore. As the men were severely frost bitten and crippled for life, the Department of Marine provided six hundred dollars to be divided among them proportionate to the necessities of each.

Due to the difficult character of his position at Flint Island Lighthouse, Keeper Heney had his salary raised in 1873 from $400 to $500. In 1877, Keeper Heney complained about the conduct of the fishermen who would spread their nets wherever they pleased on the island. These men landed fifty-four large black fish just 114 feet from the dwelling, and then, after having removed their fat, left the carcasses in the only place the keeper had to land his boat. As each carcass weighed over two tons, Keeper Heney was forced to hire two men to help him remove the carcasses as the smell was so putrid that it was becoming impossible to live on the island. The three men toiled away at the stomach-churning task for six hours a day over a period of eight days, as the tide permitted.

Margaret Martell recalled that she was five-years old when her father, John Martell, was placed in charge of Flint Island Lighthouse in 1927. Over the next eighteen years the Martell family spent on the island, they would experience a string of tragedies. John and Amy Martell had eight children when they arrived on the island: Billy, Raymond, Kenny, Loren, Ethel, Margaret, Audrey, and Murray, and four more were born on the island.

On the afternoon of March 23, 1933, Raymond said he was going to get a seal pelt for his mothers room, and he set off with his older brother Billy to hunt seal on the ice floes near the island. The seas were generally calm at the time, but three big waves came in that upset the boat the boys were in. Raymond could swim, but Billy could not. Billy desperately clung to the boat, while Raymond attempted to swim the short distance to shore. Raymond had told Billy he had a cramp in his leg, and because of that, he failed to reach shore. Keeper Martell rushed out in a small canvas boat to help his boys when he realized they were in trouble, but was unable to find Raymond until the next day, when he discovered his body submerged in the icy water off the northeast part of the island.

Keeper Martell stopped the revolving light as a signal to those on shore that something was wrong at the station, but it took a few days before the icebreaker Montcalm arrived at the island. The family built a rough box and packed Raymonds body in ice in it before it was taken to the mainland for burial.

Thirteen-year-old Ethel was making her way back to the island on October 15, 1933 with Billy and his new bride Edna, and Kenny, when their boat had engine trouble. Someone had taken the spare part they needed out of the boat, so they were left to helplessly drift. It was a stormy night with rough seas, and the boat was upset more than once. Kenny was the only one that could swim so he took a rope that was tied to the boat and jumped in the water to try to pull the boat ashore. At one point, the boat struck him, knocking him unconscious, and when he revived, he found that Ethel was missing and Billy and Edna were clinging to the boat. With the rope in his teeth, Billy was finally able to swim the boat to shore, but they never saw Edna again, even after searching the shore for days.

In January 1940, two-and-a-half-year-old Harold Martell was having pains in his belly. Amy Martell thought it must be from the ice cream he had eat ashore a few days before, but when the pain got worse, Keeper Martell loaded his son in the boat picked his way through patches of ice (clampers) to reach the hospital at Glace Bay. Sadly, it was too late. Harolds appendix had burst, and the resulting peritonitis soon took his life.

Growing up on Flint Island had plenty of good times as well. Margaret recalls playing ball with her siblings, and skating on ice off the island and later on a rink on the island itself. The girls would also quilt or hook mats. The Martell children didnt feel like they were missing anything on the island, but when they went to town, they often felt like they were hicks from the sticks. When the family finally moved off the island, Margaret never wanted to go back and never did. Shed say, Its a good place to visit, but you dont want to live there.

By 1954, the lighthouse was reported to be in poor condition, and on August 29, 1961, a temporary lantern room was installed atop the dwelling to exhibit a light while the old lighthouse was torn down and a new one was built of reinforced concrete. This lighthouse, the fourth to stand on the island, was built fifteen metres south of the previous one and stands eighteen metres high, from base to vane. Three new dwellings were also built on the island at the same time: two one-storey bungalows for the assistants, and a one-and-a-half-storey dwelling for the head keeper.

Two diesel generators were placed on the island in 1963, and the light was changed from oil-vapour to a 1,000-watt bulb. A small electric motor was also installed at that time to turn the lens, eliminating the need to wind up the weights every four hours. An electric foghorn replaced the stations diaphone fog alarm in 1971, and this change allowed the staff to be reduced to just two keepers. Flint Island was finally automated in 1985, and the remaining keepers left. Head Keeper Robert Spears and his wife Gerry, who had been on the island since 1960, were reassigned to Scatarie Island.

For a larger map of Flint Island Lighthouse, click the lighthouse in the above map.

Flint Island Lighthouse is best viewed by boat, but a distant view is possible from hiking trails at Schooner Pond and even from the waterfront in Port Morien.