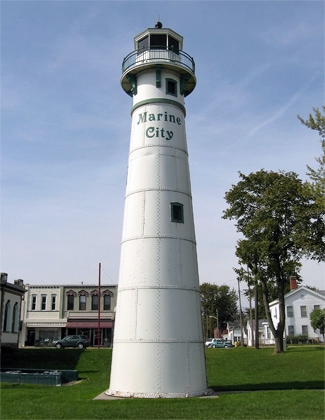 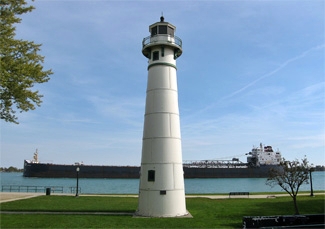 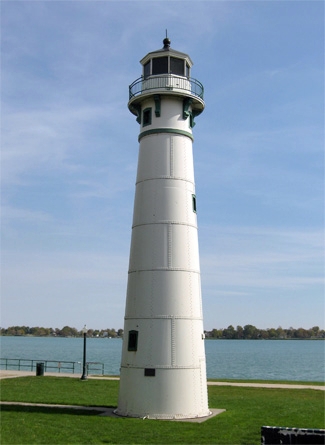 Isle aux Pêches, French for Fisheries Island, is a Canadian Island situated at the confluence of the Detroit River and Lake St. Clair. Though the island is known today by most Anglophones as Peche Island, for a period of time it was called Peach Island. On July 13, 1892, Congress passed an act that provided for a ship channel with a minimum depth of twenty feet to be dredged in the shallows of the connecting waters of the Great Lakes. The work was carried out over the next five years, and one of the improvements funded was a twenty-foot channel through Grosse Point Flats in Lake St. Clair.

Pile clusters marking the edge of this twenty-foot channel were carried away in January 1898, and it was decided that axial range lights should be built in shoal water north of Peche Island to mark the channel. Isle aux Peches Range Lights were established on April 15, 1898, with the front light consisting of a mast supported by a pile of clusters driven in nineteen feet of water. The mast was topped by a target and had a horizontal arm with two fixed white lens-lantern lights, spaced ten feet apart and displayed at a focal plane of eighteen feet. The rear light was similar in form but stood in eight feet of water, 4,650 feet southwest of the front light, and had a focal plane of thirty-eight feet.

John F. Kerby was hired as the first head keeper of the range lights, and he would have six different assistants helping him with the lights during the fourteen years he served at the station.

As part of what would become a recurring theme at Isle aux Peches, the range lights were carried away by ice in the spring of 1899, but new forty-foot-long piles had been driven by April 20, 1899, and two days later, lights, similar to the original range, were in place. On July 27, 1899, a tugboat carried away the front light, but it was re-established roughly a week later on August 4 at the expense of the tugs owners. The front light was carried away by another vessel on September 17, 1899, but as it was impractical to determine the party responsible, the government picked up the tab for rebuilding the light.

Both range lights were again carried away by ice in the spring of 1900, but replacements were ready for operation on April 28, 1900. After rebuilding the lights in 1900, the Lighthouse Board noted: The fact that the piles on which these two lights stand are always carried away by ice in the winter, and during the summer are once or twice run down by passing vessels, shows the need for structures of some strength and permanence which will serve as day beacons for the range and from which lights can be exhibited at night. The present arrangement has proven to be inadequate, as the light is not visible at times when it should be under reasonable atmospheric conditions. Something larger and more substantial is required. The Board requested $12,000 so that crib lights could be built on the range with a skeletal tower for the rear light and a keepers dwelling surmounted by a tower for the front light.

Isle aux Peches Range Lights were again carried away by ice in the spring of 1901 and 1902, but were re-established in April of the corresponding year. The Lighthouse Board repeated its request for funds for a more substantial range, and in 1902, it increased the projected cost to $18,000. The Board felt that the distance between the range lights should be decreased so they could both be seen in thick weather. This change would require the rear range light to be in deeper water, which, along with the increase in labor and material since the initial request, raised the projected cost of the range lights.

Congress finally appropriated $18,000 on June 30, 1906 for a more robust set of range lights at Isle aux Peches. Later that year, a survey was made to select the sites for the lights and plans for the structures were drawn up. Of course, while plans were being made for the new lights, the existing range was carried away by ice during the winter, but it was back in service on April 26, 1907.

Cribs for the lights were built at the Detroit lighthouse depot and then towed out in early May 1907 to the selected sites, where they were secured to piles and filled and riprapped with 342 cords of stone. Work on the superstructure was put off until 1908 so the cribs would have time to settle in place.

The permanent lights were placed in operation on June 15, 1908, and the following description of them was given by the Lake Carriers Association: The front light, which is 38 feet above the water level, is a fourth order light flashing white every ten seconds, and the rear light, which is 57 1/2 feet above the water, is a fixed red reflector light. These structures are conical steel towers, built upon concrete piers, constructed to withstand the action of the ice which each spring heretofore has carried away the temporary pile clusters from which these range lights have been exhibited.

At the opening of navigation in 1909, the intensity of the front light was increased almost tenfold by changing its illuminant from oil to incandescent oil vapor. At the same time, the rear light was improved by changing it from oil to compressed acetylene in acetone. In 1914, the front light was converted to an acetylene light that was on for one second then off for one second. This change allowed the lights to be automated, and the stations two keepers were assigned elsewhere.

By 1926, the cribs support the lights had greatly deteriorated and were in a dangerous condition. The Lighthouse Service removed the crib superstructures to the waterline in 1926 and rebuilt them in reinforced concrete. A ten-foot-tall lower story, also built of reinforced concrete, was built under the rear range as mariners had complained that the difference in height between the two lights was so small that they nearly merged along the range line.

On the night of November 5, 1927, a tugboat captain reported that the front range light was ablaze, after having seen two men leave its crib in a rowboat. The fireboat James R. Elliott rushed to the scene, and just as it was tying up to the crib, flames reached the acetylene magazine, which exploded with terrific force. The explosion shattered nearly every window in the fireboat and hurled fireman Harold Koehn into the lake. Hundreds of residents were attracted to the shoreline on both sides of the Detroit River by the explosion and fire. The front tower was blown apart and toppled by the explosion, but a temporary replacement light was established on the crib the next day.

The following account of the explosion and the lesson learned from it appeared in the Lighthouse Service Bulletin:

The tower consisted of an inclosed conical structural steel plate tower supporting a standard eight-sided lantern, exhibiting an unwatched occulting acetylene light in a fourth-order fixed lens. The focal plane of the lantern was about 30 feet above the base of the tower, which was secured to a reinforced concrete block, supported by a timber stone-filled crib. There were four acetylene tanks in the base of the tower, and the parapet plates of the lantern were provided with the usual ventilators. The tower door was shut and locked, and the structure was secured to the block by foundation bolts.

The fire apparently started on the easterly side of the crib, outside of the concrete block. Two boys, the city fire tug, and the lighthouse tender Thistle responded to the alarm. The fire gained headway, and a crackling noise, followed by a sound of escaping gas was heard inside the tower. The fire tug had just started to put water on the fire when an explosion took place which lifted the tower about 20 or 30 feet in the air and blew it open, the wreck falling in a northeasterly direction partly on the concrete pier and partly on the burning cribwork.

An examination of the station shows that the concrete pier is slightly damaged, with some cracking and spalling; the steel tower, lantern deck, lantern, and lens are a total loss; the four gas tanks show no sign of undue stress, as all the fusible plugs had melted, relieving the gas within; the 1 1/2-inch foundation bolts were all sheared off, and many of the tower joints had been pulled apart, especially at window and door openings. Parts of the lantern, lantern deck, etc., were found scattered over the entire area of the pier.

It seems probable that at least one of the tanks became hot enough to melt a fusible plug, filling the tower with gas, which probably exploded upon reaching the pilot flame at the top of the tower, or the gas may have been ignited by the flames through a small crevice under the base angle of the tower.

The chief lesson to be drawn from this explosion is the need of thoroughly adequate ventilation near the base of similarly arranged structures, and also at a point beneath the compartment in which the light apparatus is located. In any inclosed tower it seems essential that the tank compartment and the space in which the light is located be closed off or isolated from each other and separately ventilated.

A square, pyramidal tower took the place of the destroyed conical tower atop the front range crib.

The range lights were electrified in 1940. By 1980, the rear light had developed a severe list, and in 1983, it was replaced by a modern structure. Michigan Bank  Port Huron acquired the lighthouse from Luedtke Engineering Company, which was contracted to scrap the lighthouse, and then restored the structure and placed it on the riverfront in Marine City. The lighthouse was dedicated at its new home on August 21, 1983.

In 2013, Marine City mayor John Gabor announced that the city had failed to receive a matching grant from the highly competitive Michigan Lighthouse Assistance Program, which is funded by the sale of Save Our Lights specialty license plates. A representative of the State Historic Preservation Office explained that it would be difficult for Peche Island Lighthouse to receive grant money as it had been moved from its historic site and because it was built by Canadians. While the first reason may be valid, the 1908 tower is definitely an American lighthouse. Marine City plans to use the money it had reserved as matching funds to proceed with a partial restoration of the tower.

During the fall of 2014, IPC Services placed a penetrating primer on the tower followed by an intermediate coat of paint and then a polyurethane coat to provide UV protection. The latest paint job is expected to last thirty or thirty-five years. In addition to the new paint, the tower also received new windows and upgraded lighting. The total cost for the renovations came to about $35,000, most of which came from a recreation millage fund.

For a larger map of Peche Island Lighthouse, click the lighthouse in the above map.

From Highway 29 in Marine City, go east on Broadway Street to reach St. Clair River, and then turn right on Water Street. Proceed two blocks and you will see Peche Island Lighthouse just past the Water Works building between Jefferson and Washington Streets.

The lighthouse is owned by Marine City. Tower closed.