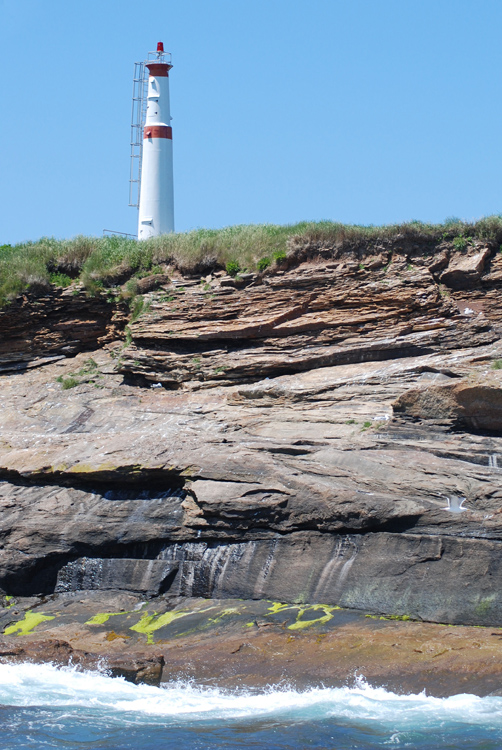 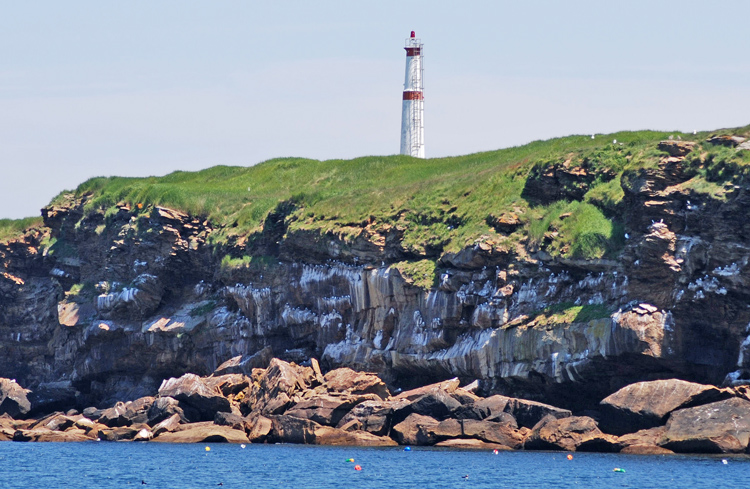 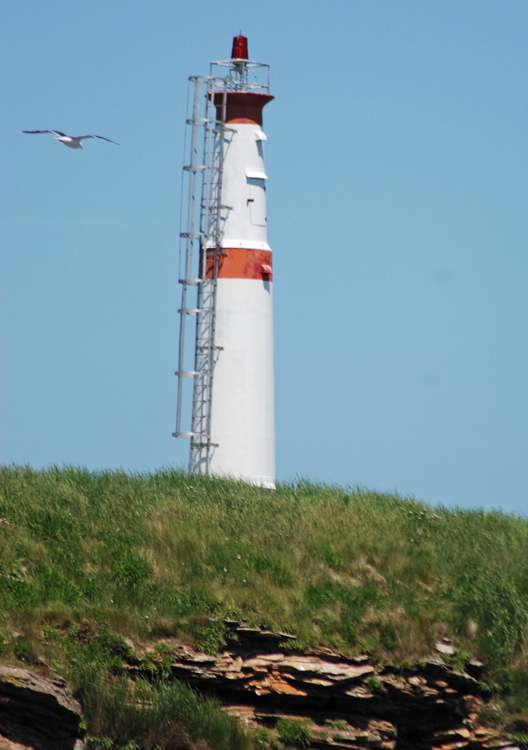 The Bird Islands are two long, thin, finger-like islands that lie in a straight line off the tip of Cape Dauphin  the cape that divides St. Ann's Bay to the north from the Great Bras dOr channel to the south. Ciboux Island is the slightly larger and more northerly of the two, and is separated from Hertford Island by 900 metres of shoal water. The islands are each roughly a kilometre long, not more than 100 metres wide, and are precipitous on every side. Ciboux Island is commonly known as Bird Island, and was listed as such in early government records.

In 1856, a petition from inhabitants of Cape Breton was read in the House of Assembly of Nova Scotia calling for a lighthouse at the mouth of the Great Bras dOr. The Committee on Navigation Securities recommended that funds be appropriated that year for a light at the Great Bras dOr, but it wasnt until 1863 that a lighthouse was finally built on the Outer Bird Island.

John H. Kendrick selected the centre of the outer island as the site for the lighthouse, and on October 22, 1864 he sailed from Halifax having the lantern room and supplies for Ciboux Island. The lantern room was landed on the island on November 7, when it was discovered that white lamp glasses had been sent instead of red ones. With the proper glasses having arrived on November 25, the light was placed in operation on the 26th and was declared to be one of the best on the coast. Malcolm Morrison was appointed the first keeper of the lighthouse and was instructed to discontinue the light when the coast was blocked with ice until he saw an opening in the ice or a vessel.

Before a 700-gallon, brick cistern was built in the cellar of the keepers dwelling in 1867 to catch rainwater, Keeper Morrison had to transport water to the island from the mainland during dry weather. In December 1869, Keeper Morrison sent a letter that showed how well-built the sloping pier was that had been constructed the previous summer:

The storm on the 5th October was nothing extraordinary, but the north-east storm following was a storm; it was certainly the heaviest storm I have ever seen since I came to the Island. At one time I feared that we would all be swept off the Island into the sea; it raged fearfully. I lost my hut, boat, and two nets. The boat was hauled up far above the pier, and well lashed with ropes. The pier, although facing the north-east, escaped any damage, except one plank, the [one] next to the rockit must have been twisted off by some of the retiring waves; and I am now satisfied the work will stand until it goes away by decay; the waves roll over and over it, and it remains the same.

In October 1870, Keeper Morrison was killed by the bursting of his gun. His widow cared for the lighthouse until the next summer when Angus Ross was appointed keeper at an annual salary of $400.

The wooden, octagonal lighthouse had an eight-sided lantern room that had a diameter of seven feet and housed a chandelier with three lamps set in twelve-inch reflectors on each of its two faces. A clockwork mechanism caused the chandelier to revolve to produce alternating red and white flashes. The lamps consumed roughly 170 gallons of oil each year. On July 1, 1875, the characteristic of the light on Bird Island was changed to flashing red, as the new light erected just up the coast on Cape North was given a red and white flashing characteristic. In 1877, Keeper Ross was given permission to stay on the mainland with his family during the winter as long as he found a competent person to take his place on the island. Bird Island Lighthouse was considered an important coast light and was kept in operation all winter.

A hoisting crane was erected on the cliffs in 1872 to help land supplies. This one replaced one that had become rotten and unsafe, but it appears to have been supplanted by yet another one in 1874. Even with a crane, landing oil and supplies on the island was an arduous task. In 1937, Clarissa Archibald Clara Dennis visited the island and captured this photograph of men landing oil on the island. Clara was the daughter of the editor-in-chief of the Halifax Herald and the first female travel writer to cover Nova Scotia.

A new lantern room with a diameter of nearly ten feet was placed atop the lighthouse in 1881 along with a new lighting apparatus. F.J. Geizer installed a thirty-inch, long-focus, single-flash reflector and a 55mm burner in the lantern room at Ciboux Island in 1915 at a cost of $1,076.

On July 17, 1939, the Department of Transport awarded Richard G. McDougall of Sydney a $6,890 contract to construct a combined dwelling and lighthouse on Ciboux Island. The resulting square, two-storey, wooden dwelling had an octagonal lantern room centred atop its hipped roof. A twelve-volt lamp powered by two banks of ten, single-cell batteries connected in parallel replaced the oil lamp in 1952. As the batteries would last six to eight months, this change allowed the light to be automated and the last keeper left Ciboux Island that year.

Vandalism took its toll on the unattended lighthouse, and in 1971, a Millard skelton tower topped by a watertight marine beacon was placed on the island. The wooden lighthouse was sold off, and its new owners stripped it of anything valuable and left it to rot.

In 1980, the fibreglass tower standing on the island today was bolted to a concrete pad that was poured over part of the old foundation. Its light was still a twelve-volt system, but the electricity was provided by two car batteries that were charged by a solar panel. After receiving no objections to a notice announcing its plans to discontinue Ciboux Island Light, the Canadian Coast Guard shut down the light in 2017.

It didnt take too long after the last keeper left Ciboux Island for seabirds to reclaim the island, and in 1989, Bird Islands Wildlife Management Area was created to protect this prime nesting area. The Nova Scotia Bird Society owns Hertford Island, while the government owns Ciboux Island. The islands are home to the largest colony of great cormorants in North America along with Atlantic puffin, razorbills, and black-legged kittiwake. Tour boats circle the islands during the summer to allow people to view the birds.

For a larger map of Ciboux Island Lighthouse, click the lighthouse in the above map.