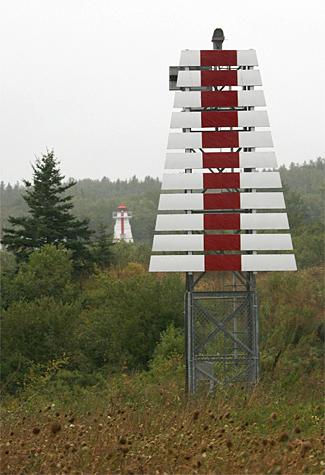 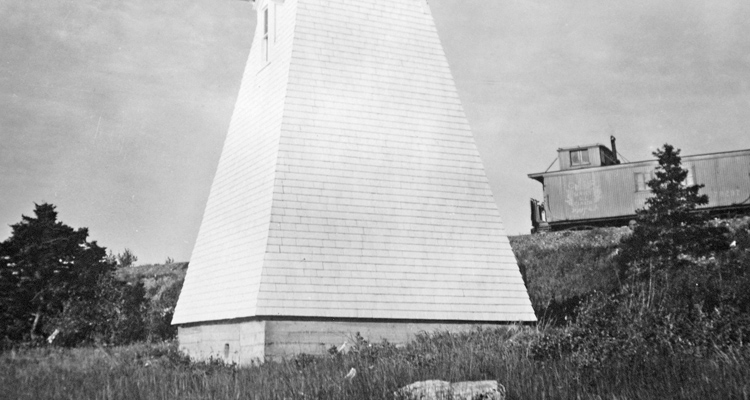 The village of Havre Boucher is situated on the northwest side of the entrance to the Strait of Canso. There is some disagreement on how the village received its name. One explanation is that Havre Bouchre is French for Blocked Harbour, and this name was applied due to Île du Havre, an island that partially blocks the entrance to the harbour. A second explanation is that the harbour was named after Captain Francois Boucher of Quebec who was forced to overwinter there in 1759.

In 1878, the Department of Marine invited tenders for the construction of range lights to mark the entrance to the harbour at Havre Boucher. The following description of the completed range was published the next year:

During the past season two Range Light Towers were erected at Harbour au Bouche, Antigonish County, and put in operation in October last. The front building is situated on the south-west shore of the harbour, and is a square wooden tower, 32 feet high, showing a fixed white catoptric Light elevated 36 feet above high-water. The back tower, which is similar to the front, is situated 1,420 feet from it, and shows a fixed red catoptric Light elevated 107 feet above high-water. Both lights are visible 9 miles in fair weather, and when ranging in one line, they indicate the position of the dredged channel entering Harbour au Bouche. The contract for the construction of these towers was awarded to Mr. Wm. Kaulback of Harbour au Bouche, for $575, but he failed to complete the work to the satisfaction of the department.

It appears William Kaulback was only paid $475 due to his failure to complete the work in a satisfactory manner. The total cost for the range lights came to $1,309, which included $476 for the lantern and lamps, and $110 for purchasing the needed land and rights-of-way.

William J. Webb was appointed the first keeper of the range lights at an annual salary of $200. Members of the Webb family looked after the range lights until they were automated in 1963  except for between 1916 and 1924 when Jeffrey T. Crispo served as keeper.

In 1890, both towers were stripped and shingled, and their sills renewed. A new concrete foundation was poured for each tower in 1954. A coloured striped was added to the seaward face of the towers in 1987 to improve the visibility of the towers during daylight hours.

The latest set of range lights at Havre Boucher was erected in March2010, after the Canadian Coast Guard determined the previous pair was too rotted to be repaired. Rather than replace the rear salt-shaker-style tower by a steel, skeletal tower, the Coast Guard, in consultation with the local community, decided to use a new modular lighthouse that resembles the previous lighthouse but will require less maintenance.

A Coast Guard crew in Charlottetown, P.E.I., constructed the replacement tower, which is made of trapezoidal pieces light enough to be airlifted to remote sites. Once assembled, the tower is covered by vinyl siding that resembles cedar shingles but will not have to be regularly scraped and painted. You'd be hard-pressed to tell the difference unless you walk right up to it and actually touch it and find that it's actually vinyl siding, claimed Dave Smith, supervisor of maritime civil infrastructure with the Coast Guard.

This new design will save the Coast Guard a significant sum in maintenance costs and will be used to replace similar square, pyramidal towers when they are determined to be beyond repair.

As the front tower was in a less-visible position along the shore, it was replaced by a skeletal tower with slatting on one side.

For a larger map of Havre Boucher Range Front Lighthouse, click the lighthouse in the above map.

From the Trans-Canada Highway, take Exit 38 for Havre Boucher and drive to the southwest side of the harbour where you will find the range lights.