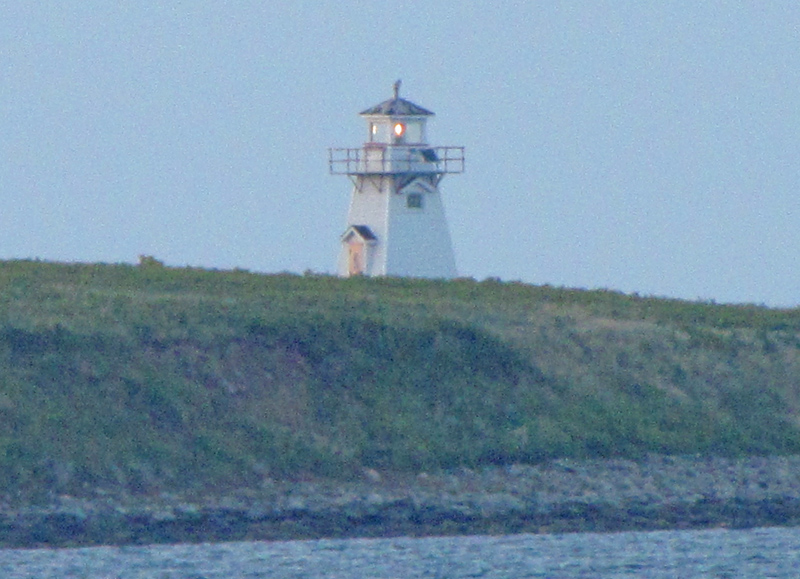 Small Pomquet Island, lies just off Pomquet Point near Bayfield. The island, whose name was spelled Pomket in government records between 1868 and 1877 and is known locally as Bayfield Island, is roughly 600 metres long and 250 metres wide. A reef that links the southern tip of the island to Pomquet Point partially dries out at low tide, leaving a narrow passage with just a metre of water in it. At one point, a breakwater was extended toward the island from Pomquet Point to help form, with the island, a shelter for vessels.

On July 20, 1867, the Board of Works of Nova Scotia awarded a contract to E.G. Randall to build a lighthouse on Pomquet Island for $898. At this time, Confederation plans were nearly finished, and the lighthouse would not be finished until Nova Scotia had become part of Canada. John Atwater was appointed the first keeper of the lighthouse in 1868. The following year, the Department of Marine noted that the new light was very useful to vessels caught in Saint Georges Bay under contrary winds, as it enabled them to make a safe harbour.

H.W. Johnston, the Nova Scotia agent of the Department of Marine and Fisheries, submitted the following report on the lighthouse in 1874:

Pomket Island (Fixed Red)  Light is shown from a three-sided window, with iron sashes glazed with plate glass 40 x 21, of which two spare panes are on hand. The land side is dark, and the light is shown by four A lamps and 12-inch reflectors. About 100 gallons of oil are used during the year, and on 20th of June the station was inspected, and 112 gallons delivered. Three oil tanks are kept on hand  the dwelling and light-house are in one building, besides which there is an oil store 12 feet square. The chamber on the second flat was furnished in the autumn of 1873, and the premises are in good repair. The keeper complains that his present boat, seventeen feet in length and somewhat out of repair, is too large to be managed by one person. I think he should he supplied with a smaller one and a boat house.

After Keeper Atwater died in the fall of 1876 at the age of sixty-three, Colin A. Chisholm was appointed keeper on March 5, 1877, at an annual salary of $350. A gratuity of two months salary was given to Sarah Atwater, widow of Keeper Atwater.

In 1893, a kitchen was secured to the main building, foundation walls were repaired, and new frames were fitted to the cellar windows. A new boat was supplied in 1894, and the old one, being too large, was taken to a station on Pictou Island.

In 1910, a square tower was attached to the dwelling, and a fifth-order 270° Fresnel lens took the place of the catoptric apparatus previously used. The characteristic of the light remained fixed red.

George E. Millar served two stints as keeper on the island: from 1924 to 1942 and then as the final keeper of the lighthouse from 1945 to 1960. Keeper Millar was a veteran of World War I and fought at the Battle of Vimy Ridge, where seventy percent of his battalion was killed. After returning home, George married his schoolyard sweetheart Ruth Mitchell. The couple soon moved to Pomquet Island where they raised six children. In 1942, forty-five-year-old Keeper Millar went on military leave, and John C. Henderson was temporarily placed in charge of the lighthouse until Millar was discharged from the Army. During World War II, George served as a drill sergeant at Parkdale Camp near New Glasgow, which was a training base for conscripts. Keeper Millars son Malcolm served with the Royal Canadian Air Force in England during the conflict.

A letter dated May 11, 1959 was sent to Keeper Millar asking him to board a work crew that would build a detached square, wooden, lighthouse on the island and equip it with an automatic light. Millar was also asked to provide a horse at a suggested rate of four dollars a day to haul supplies. The new lighthouse was completed in July 1959.

The old combination lighthouse/dwelling was declared surplus on January 21, 1960 and put up for sale. When no offers were received, the lighthouse was torn down on October 4, 1962, leaving just the current tower on the island. James Boyle served as caretaker of the automated light from 1960 to 1968.

Ruth Edgett, a granddaughter of Keeper Millar, asked her mother and her aunts and uncles to write down their memories of their unique childhood. The stories were intended for just the enjoyment of the family, but, after realizing she had something precious that needed to be shared, Ruth wove the accounts into a novel that is part non-fiction and part fiction. A Watch in the Night: the story of Pomquet Islands lost lightkeeping family was published in 2007.

For a larger map of Pomquet Island Lighthouse, click the lighthouse in the above map.

The lighthouse is best seen by boat, but a distant view is possible from the shore in Bayfield. The view should be much better when it isn't pouring rain like when I took the above picture.