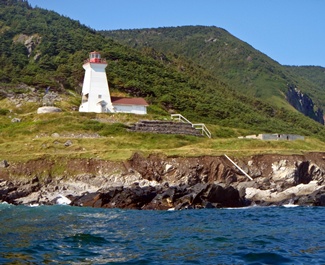 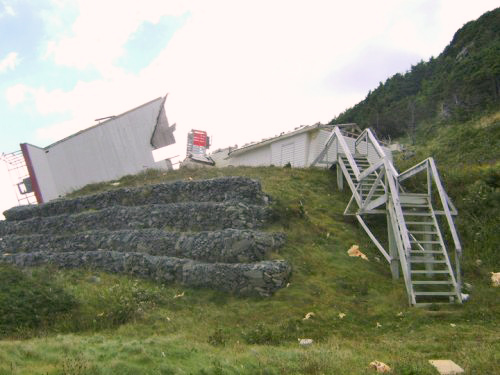 Cape North is the northernmost part of Cape Breton Island and defines the southern side of Cabot Strait, the widest of three outlets from the Gulf of St. Lawrence to the Atlantic Ocean. In 1856, a submarine telegraph cable was laid across Cabot Strait, connecting Cape Ray, Newfoundland with Aspy Bay on the Cape North peninsula.

A lighthouse was completed on Cape Ray in 1871, and Cape North received its first lighthouse in 1874. Cape North Lighthouse was not built on the northernmost point of the cape but about one-mile-and-a-half to the southeast.

The Department of Marine announced the completion of the light on Cape North in its annual report of 1874:

The light-house is completed, and the revolving apparatus, lamps and oil all delivered at the station, but it will not be put in operation until the opening of navigation in the spring. It is proposed to make it a revolving red and white, shewing alternate red and white flashes every forty-five seconds, and making a complete revolution every minute and a half.

The light is elevated seventy-four feet above the level of high water, and in clear weather should be seen at a distance of fifteen miles.

The dwelling is under the same roof as the light-house, which is a square wooden building, painted white, with a tower erected on it, and is 26 feet in height from base to centre of the light, and 34 feet from base to top of lantern. There is also an oil store 16 x 12. This will be a coast light.

Mr. Jacob Bowser erected the building for the contract price of $3,970, and Mr. John McKinnon was appointed keeper at an annual salary of $400.

Construction of a fog alarm building for Cape North commenced in 1906, but the framed wooden building, measuring fifty-three-and-half feet by thirty feet, was not completed until the following year. A concrete cistern was built under the boiler room to supply water for the three-inch diaphone plant that was purchased from the Canadian Fog Signal Company of Toronto for $4,600. As plans for a new lighthouse were already in the works for Cape North, a double-dwelling was built to house the lighthouse keeper and the engineer needed to operate the fog alarm.

In 1906, work began on a new concrete lighthouse for Cape Race, Newfoundland that would support a huge hyper-radial lens, which when it was activated became the largest lighting apparatus in North or South America. The fact that 2,000 people had lost their lives in the ninety-four shipwrecks that occurred off Cape Race between 1864 and 1904 was ample justification for the powerful light.

No longer needed, the previous lighthouse used at Cape Race was disassembled and shipped to Cape North in 1909. This was possible because the tower was made up of thirty-two iron plates that had been cast in England in 1855. Eight hundred bolts had to be removed to take down the tower. A third-order Fresnel lens, purchased from Barbier, Benard, & Turenne of Paris, France, was installed atop the tower at its new home, and the new light commenced operation at the opening of navigation in 1911. A clockwork mechanism, which had to be wound every four hours, revolved the four-paneled lens to produce a white flash every five seconds. The tower measured forty-seven feet form its base to the vane on the lantern room, and the light had an elevation of 110 feet above the high-water mark.

The transplanted tower from Cape Race was not installed right by the original Cape North Lighthouse, but by the fog alarm building, two-thirds of a mile to the northeast on Money Point where it could be better seen by vessels approaching from the west. This point was reportedly so named when a vessel wrecked there with many Spanish dollars on board. For some time afterward, these coins could be collected on the beach, and in one day, a clever man collected eighty of them from the water by using a pole with one end dipped in tar. The original Cape North Lighthouse remained standing as a daymark for many years, and photographs taken by Clara Dennis in 1937 show it in a state of disrepair.

The iron tower on Money Point was originally painted solid red, but it was later given a catchy red-and-white checkerboard daymark to make it more visible from the sea.

Located at the base of a steep mountain and without a natural harbour nearby, Cape North Lighthouse was a very isolated station. Things improved somewhat when a rough road was extended to the point, and the keepers were provided a jeep. Knowing that timely evacuations were now possible to treat illnesses or injuries gave some peace of mind to the inhabitants of the station, but the jeep had a recurring problem  its front engine bearings would burn out. It was eventually deduced that the lengthy journey up the steep mountain caused all of the motor oil to drain to the back of the engine, leaving insufficient lubrication in the front part.

In 1973, commercial power was extended to the station, and $11,500 was expended in rebuilding the access road.

Dr. David Baird, director of the National Museum of Science and Technology in Ottawa, was looking for a lighthouse for the museum grounds in Ottawa. To be considered, a lighthouse had to meet four criteria: 1) it had to be available, 2) it had to be historic, 3) it had to be one that could be taken apart and put back together, and 4) it had to be in good enough condition to withstand a move. When the Coast Guard announced its plans to demolish Cape North Lighthouse in 1978, Baird knew he had found his lighthouse.

Cape North Lighthouse actually served two years beyond its planned retirement in 1978, as work on a new tower for Money Point didnt begin until July 1980. The faithful, iron tower went dark in early October of that year, after a temporary light had been established. The Fresnel lens was first removed from the tower, and each of its four panels was carefully packed in foam plastic. Ian Jackson, a supervisor from the museum, arrived on scene on October 14, to witness the dismantling of the tower so he would be able to put it back together.

A truck, pulled by bulldozers, transported the five-by-eight-foot, three-quarter-ton, lighthouse sections, four at a time, up the mountain behind the station. As the towers iron dome was too wide for the truck, it made the ascent dangling from the crane that had been used to disassemble the tower. The pieces of the lighthouse were loaded onto two flatbed trucks and hauled to the Coast Guard maintenance depot in Dartmouth, where they were sandblasted and painted before being shipped to Ottawa. The three-week effort to remove the lighthouse from Money Point finished just in time, as the very next day the rudimentary roadway was snowed in for the winter.

A concrete foundation was poured on the grounds of the museum to support the lighthouse, and large limestone boulders were placed around the tower to suggest a rocky Atlantic shore. Each day, thousands of people drive past the tower, which retains its red-and-white checkerboard daymark and still houses its Fresnel lens.

Cape North Lighthouse was destaffed on September 30, 1987, despite a fourteen-page petition filed in protest. When no interest was shown in the two dwellings at the station, they were burned to the ground in February 1989. In 2010, the Canadian Coast Guard toppled the thirty-year-old tower on Money Point and erected a square, skeletal tower to support a modern beacon to mark Cape North.

For a larger map of Cape North Lighthouse, click the lighthouse in the above map.

From the Cabot Trail near Dingwall, go north on Bay St. Lawrence Road for 13.4 kilometres and then turn right onto 6014 Road, which you can follow for 12 kilometres to Cape North Lighthouse. Note that a 4WD vehicle is required, and you will need to walk the last several kilometres.