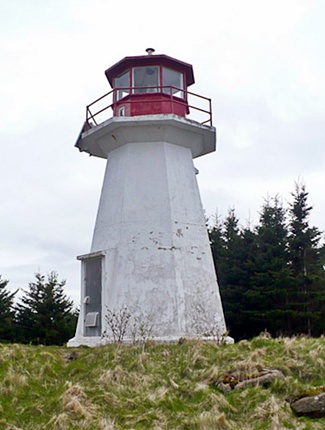 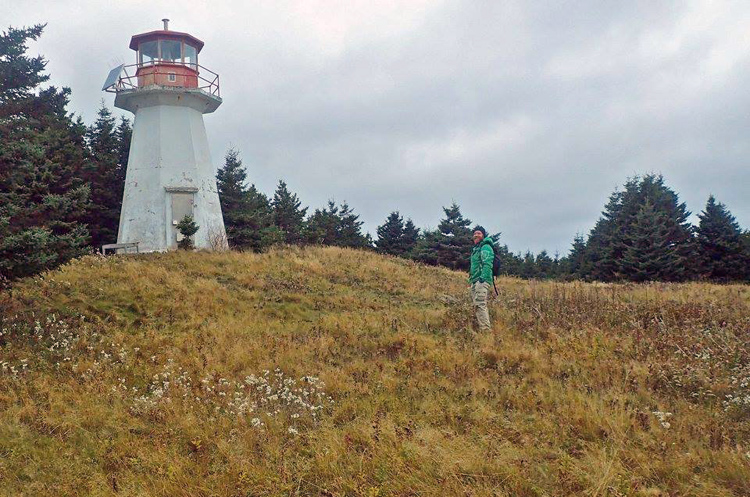 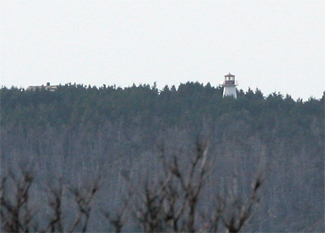 Margaree Island, also known as Sea Wolf Island, is located roughly four kilometres off the west coast of Cape Breton Island, midway between Margaree Harbour and Inverness. The island is two kilometres long, five hundred metres wide, and, in profile, resembles a whales back, with the highest point rising to about fifty metres. Cliffs ring the island, making it difficult to land except in calm conditions. In 1853, a committee in the House of Assembly of Nova Scotia recommended a lighthouse be built on Margaree Island based on information provided by Captain Thomas Coffin, a member of the legislature. Margaree Island Lighthouse was at the top of a list of five lighthouses that were to be built in 1854 using two thousand pounds allocated by the government. The lighthouse was finished in 1854 but was likely not placed in operation until the opening of navigation in 1855, when Nathaniel C. McKeen began his twenty years of service on the island. Keeper McKeen was given 80£ each year: 60£ as salary and 20£ for fuel. Though the light was not exhibited during the winter, McKeen remained on the island with his family.

William Condon, superintendent of the Board of Works, visited Margaree Island in 1857 and filed the following report:

I found the lantern, lamps, &c. in very good order, and the light having the appearance of being well attended to. I have to report this building as being in bad order, and requiring next season some repairs which are necessary for its preservation. The foundation wall has given way, and the roof is leaky; the kitchen cellar, the only place where the family have to cook in, overflows, which renders the family very uncomfortable. The plastering has also fallen from several places. This must have been a most wretchedly built affair, as it is only erected in 1854, to be so soon in such bad condition. I have also to call the attention of the board to the building as being too small for the purpose intended; it is of the same size as those I have already called attention to at Port Hood and Whitehead, and being like them used as a light house and dwelling, affords but little accommodation for a family. I would recommend that a small addition be put to this house, to make it somewhat comfortable for a family to live in; this could be done, if thought advisable, when the repairs are being made.

During the fishing season, fishermen inhabited shanties on the island to be closer to the fishing grounds. Keeper McKeen was not on the best of terms with the fishermen, as they encroached on the station property. In 1860, a fire, apparently set by trespassers on the island, came within eighty feet of the lighthouse. Thomas P. Jost, Superintendent of Lighthouses for Nova Scotia recommended that the government prevent parties from taking possession of parcels on the island without permission. Some fishermen had filed complaints against Keeper McKeen, but Jost felt most, if not all of the complaints, were without merit.

During his time on the island, Keeper McKeen made several improvements. He built a road from the landing to the lighthouse, erected three buildings of his own, and cultivated thirty acres from which he was able to harvest enough hay and grain to winter seven head of cattle, two horses, and one hundred sheep. Upon his retirement in 1874, Keeper McKeen estimated his improvements at $400, but the government reimbursed him just $150.

John McFarlane became keeper of Margaree Island Lighthouse in 1874 and during his third winter on the island he rescued a man that was stranded on drift ice near the island. Keeper McFarlane contracted an illness, caused by the exposure and over exertion he suffered during the rescue, that rendered him a cripple. He managed to continue to care for the light, however, until his death in 1880.

A new iron lantern, with a diameter of 9 2/3 feet, was placed top the lighthouse in 1883 and equipped with a new lighting apparatus consisting of seven large flat-wick lamps with twenty-one-inch reflectors and five lamps with eighteen-inch reflectors, arranged in two tiers. Numerous repairs to the lighthouse were carried out in 1894, and in 1908 the lighthouse tower and keepers dwelling house were practically rebuilt, as the old buildings had become thoroughly dilapidated form age. This rebuilding resulted in a new octagonal, wooden lighthouse in place of the square one.

In 1921, a second-order Fresnel lens was installed in the lantern room, changing the characteristic of the light from fixed white to the following pattern that was repeated very thirty seconds: six seconds of light, three-second eclipse, eighteen seconds of light, three-second eclipse. The fact that a second-order lens was used on the island is evidence of the importance the lighthouse played as a major coastal light. A first-order lens was used on Sambro Island in Nova Scotia, and a handful of second-order lenses were used at other stations in the province including Seal Island and Cape Forchu. Light Lists warned mariners that if they were in dangerous proximity to the island, the islands towering cliffs could obscure the light.

On November 29, 1955, Keeper Alexander J. MacLellan lost his life in a boating accident while returning to the island. During the period from 1957 to 1960, a new one-and-a-half-storey dwelling and a reinforced concrete lighthouse were built on the island. John R. MacLeod, the islands last resident keeper, served from 1968 until the light was automated in 1971.

Sea Wolf Island National Wildlife Area was established in 1982 to protect an important breeding ground for colonial nesting seabirds. More than two percent of the entire Canadian population of Great Cormorants nest on the island. Besides the cormorants, the island is also home to Black Guillemots, Great Blue Herons, Herring Gulls, Great Black-backed Gulls, and at least one pair of Bald Eagles.

For a larger map of Margaree Island Lighthouse, click the lighthouse in the above map.

The lighthouse is best seen by boat, but a distant view of the lighthouse, as seen in the photographs at left, is possible by driving toward the shore from NS-219.