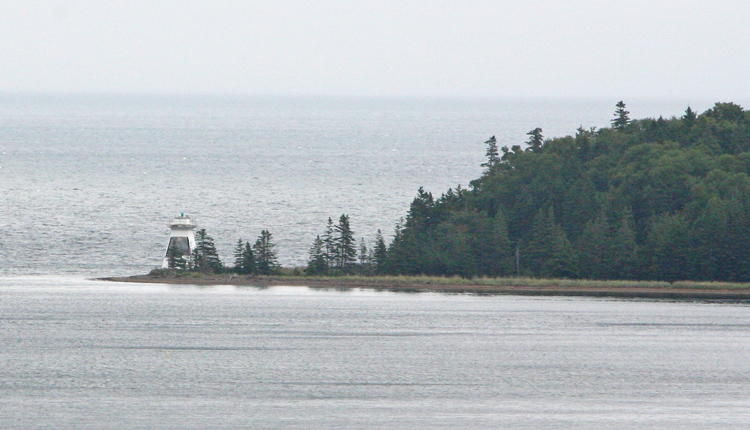 Marble Mountain is a small community situated on the southwest shore of Bras DOr Lake on Cape Breton Island. As implied by its name, the community is linked to a large marble quarry located on a nearby hill. Years of mining has produced a beautiful white beach that gives the surrounding water a tropical green appearance when the light conditions are right.

Vessels calling at the quarry would anchor at Clarke Cove, where there was a commercial wharf. To guide traffic into the cove, the Department of Marine established a pair of range lights at Clarke Cove that it described in its annual report:

Marble Mountain. Inclosed range light towers, from which fixed red catoptric lights are shown, have been erected at Marble mountain, Clarke cove, on the north side of West Bay, Bras d'Or lake, Cape Breton; and the pole light previously maintained in the same locality has been discontinued. Both towers are wooden structures, square in plan, with sloping sides, surmounted by square wooden lanterns, the whole painted white.

The back tower stands on the side of the mountain, 800 feet N. 42" W. from the front tower. It is 20 feet high from its base to the top of the ventilator on the lantern. The light is elevated 244 feet above high water mark, and should be visible 11 miles in the line of range.

The two lights in one, bearing N. 42° W., lead in between Paddle and Nameless shoals, and between the shoals off George and Cameron islands. The work was done by days labour, under the supervision of the officers of our Halifax agency, and under the foremanship of Mr. Whebby. The cost of construction was $1,950.43.

Roderick McDonald was hired as keeper of the range lights on April 22, 1904 at an annual salary of $100.

As mariners had to navigate an intricate course to avoid islands and shoals when calling at Marble Mountain, the lower of the two range towers was relocated in 1977 to Cameron Island, just offshore. In this location, the tower would help mark the entrance to the narrow, buoyed channel leading to Clarke Cove. When the tower was to be moved, it was found that its lantern room was rotten. The lantern room was removed and the top portion of the tower was decked over to support an exposed beacon. The upper range tower on the mountain was being moved to a museum when a helicopter dropped it, and the tower smashed into pieces.

In May 1988, the tower was equipped with a solar panel and a sun switch to activate the light only when needed.

For a larger map of Cameron Island Lighthouse, click the lighthouse in the above map.

The lighthouse is best seen by boat, but a distant view of the tower can be had from a roadside park, with picnic tables and benches, along Marble Mountain Road, just north of Marble Mountain.