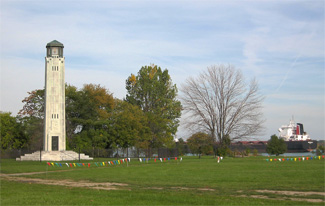 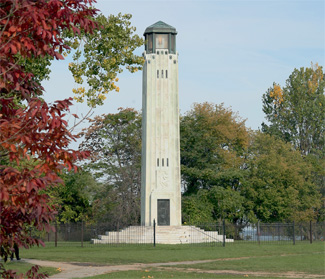 Born in Dundas, Ontario on January 21, 1844 to Scottish parents, William Livingstone moved to Detroit as an infant and graduated from city schools in 1862. Soon after graduating, Livingstone began his multifaceted career, which would see him rise to prominence in banking, publishing, and Great Lakes transportation. After serving as an apprentice machinist in Detroits railroad shops, Livingstone started a shipping business with his father in 1865. Livingstone purchased the Detroit Evening Journal in 1885, and in April 1900, he became president of Dime Savings Bank, a position he held until October 17, 1925, when he died in his office at the bank building.

With all of his accomplishments, Livingstone is best remembered for his contributions to shipping on the Great Lakes. He founded Michigan Navigation Company in 1880, and then served as general manager of Percheron Steam Navigation Company, responsible for the construction of the steamships Palmer and Livingstone, which at 297 feet in length were the largest ships on the Great Lakes.

From 1902 until his death in 1925, Livingstone served as president of the Lake Carriers Association. In this role, he was instrumental in persuading the Federal Government to construct the 1,350-foot Davis and Sabin locks at Sault Ste. Marie, to deepen and straighten channels in St. Marys River and across Lake St. Clair, and to build an independent waterway for downbound vessels in the lower Detroit River. Work on this last project, which was named Livingstone Channel to honor the president of the Lake Carriers Association, began in 1908 and opened to commerce on October 19, 1912, with the freighter William Livingstone leading the procession.

As a tribute to William Livingstone, a memorial lighthouse was built at the east end of Belle Isle Park on land donated by the City of Detroit and with funds provided by the Lake Carriers Association and citizens of Detroit. The following description of the lighthouse, which commenced operation on April 8, 1930, was provided by the Lighthouse Service:

The lighthouse is in the form of a fluted shaft of white marble, 47 feet high, rising from an octagonal platform of the same material, flanked by wide steps on all sides. The shaft is about 11 feet in diameter at the base, tapering to about 8 feet at the top, where it is surmounted by a bronze lantern of irregular octagonal shape. There is a heavy bronze door at the base, and handsome bronze inscriptions have been placed to indicate the purpose of the memorial. A circular interior staircase, of the usual lighthouse construction provides access to the lantern.

Inside the lantern is a fourth order lens fitted with an electric light, giving a candlepower of approximately 11,500. In order to project light into the shadows cast by heavy astragals of the lantern, four auxiliary reflector lights, each of 150 watt capacity, are provided. All lights are occulting, showing a light of four seconds duration every five seconds. Suitable stand-by equipment is provided in the form of a battery-operated low-voltage lamp mounted in an auxiliary sixth order lens, placed immediately beneath the main light.

In speaking at the dedication of the lighthouse, held on October 17, 1930, exactly five years after the death of William Livingstone, H.S. King, Deputy Commissioner of Lighthouses, shared the following:

The lighthouse has always seemed to me to be symbolic of two primary ideals, reliability and service, and that this permanent memorial has appropriately taken this shape well signifies the extent to which the life of Mr. Livingstone fulfilled these ideals.

Now when two individuals or two organizations are both devoted to the same high ideals, there must grow out of such an association a mutual respect and a spirit of confidence and cooperation. This spirit of mutual confidence and cooperation, beginning under the guidance of William Livingstone and preserved and extended by his successors to-day, characterizes the relations between the Lake Carriers Association and the Lighthouse Service. It is in no small way responsible for the fact that the Lighthouse Service is able to progress so rapidly and systematically with the development and use of the most up-to-date methods and apparatus in the section covered by the operations of the Lake Carriers Association. A striking example of this is the radiobeacon system on the Lakes. It took far-sighted vision to recognize 10 or even 5 years ago what this new aid might mean to the fog-bound mariner and to ask the conservative navigator to trust his life and his vessel to this new and unfamiliar device. And it took mutual confidence and cooperation to make it the success it is to-day. We feel in Washington this confidence in the progressiveness, the honesty of judgment, and the spirit of reliability and service of the Lake Carriers Association, and are gratified to be able to join with you in the dedication of this beautiful shaft as a most fitting symbol of the life and work of William Livingstone.

Charles Warren, speaking in behalf of the private donors, remarked that there was no other waterway in the world traversed by more ships than the Detroit River. More ships and more tonnage pass Detroit each year, he said, that through either the Suez or Panama canals.

The memorial lighthouse, which was designed by Albert Kahn and built of Georgia marble at a cost of $100,000, was not the first lighthouse built on Belle Isle. After Congress appropriated $10,000, a lighthouse was built on Belle Isle in 1881 and placed in operation for the first time on the night of May 15, 1882. The original Belle Isle Lighthouse consisted of a square, redbrick tower with an attached, two-story brick dwelling and was equipped with a fourth-order Fresnel lens that displayed a fixed red light from the southeast point of the island. A circular oil house was added to the station in 1891.

Louis Fetes was keeper of Belle Isle Lighthouse for over forty years, nearly the entire time the lighthouse was staffed. When he arrived on the island in 1886, there was no bridge connecting it to the mainland, and to reach Detroit, Keeper Fetes would row to the Canadian side of the river, walk a few miles, and then take the Walkerville ferry. Fetes brought his bride to the island in 1889, and the couple raised six children at the lighthouse. While the family resided in the lighthouse, Belle Isle was transformed into Detroits playground. The automation of the lighthouse in 1930 is said to have broken Keeper Fetes heart, and he died the following year at the age of seventy.

After the light was automated, the Detroit superintendent of the Lighthouse Service lived in the lighthouse until 1940, when the dwelling was abandoned. In 1935, Belle Isle Light was transferred from the lighthouse to a nearby combined flagpole and light mast. Park trees were starting to obscure Belle Isle Light, and rather than carry out extensive trimming or raising the lighthouses tower, the Lighthouse Service decided to erect the new flagpole, which was designed to harmonize with its surroundings. The flagpole was seventy feet tall and had a bracket at a height of forty feet that supported a 300 mm aluminum lantern. The lantern was equipped with a 300-watt electric lamp fed by commercial power and could be raised or lowered using a small hand winch attached to the pole. In the event of current failure, a warning bell was rung, and a back-up light in the main tower was activated.

Vandals broke into William Livingstone Memorial Lighthouse in July 1980 and stole two of its four, ninety-pound lenses from the lantern room. Two iron bars were placed across the lighthouses door to deter further vandalism, but in January 1981, the lighthouse was broken into again and graffiti was spray-painted on a temporary plastic lens being used atop the lighthouse.

Today, William Livingstone Memorial Lighthouse alternately sends out a white and red flash, separated by ten seconds, and continues to remind visitors of the accomplishments of William Livingstone, one of the Detroits most prominent and public-spirited citizens.

For a larger map of William Livingstone Memorial Lighthouse, click the lighthouse in the above map.

From Highway 10 in downtown Detroit near the GM building, take Jefferson Avenue east for two miles to Grand Boulevard. Turn right on Grand Boulevard, which will take you onto Belle Isle. Once on Belle Isle, the main road goes counterclockwise around the island. Follow the road to the eastern end of the island, where you can park and walk to William Livingstone Memorial Lighthouse.

The lighthouse is owned by the City of Detroit. Grounds open, tower closed.


According to an informational sign at Beaver Island Lighthouse, a fourth-order Fresnel lens on display there was reportedly used for fifty years at William Livingston Lighthouse.

While you are on Belle Isle, it is definitely worth making a stop at Dossin Great Lakes Museum. Besides having a collection of Fresnel lenses donated by Evelyn Osborn in memory of Milton Hogg, the museum has interesting displays on the Great Lakes and a pilot house where you can watch freighters transiting the Detroit River. Of the five lenses on display - four, fourth-order and one third-order - only the origin of the fourth-order lens that is missing its bull's-eyes is known. It served in Passage Island Lighthouse on Lake Superior.