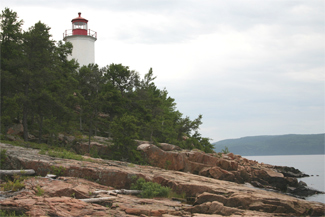 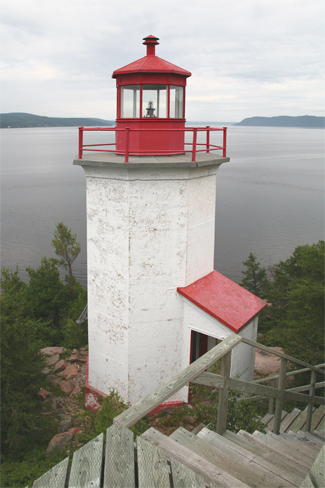 The Saguenay River, which drains Lac Saint-Jean and roughly 175 kilometres later empties into the St. Lawrence River, is extraordinary, resembling a long and narrow loch for the first eighty kilometers above the St. Lawrence. The spectacular beauty of this lower section of the river was acknowledged in 1982, when it became Saguenay Fjord National Park.

The Saguenay River is roughly 180 metres deep in its lower section, but ninety kilometers above the St. Lawrence, it rapidly contracts and assumes the typical character of a river, with mud banks and shoals of large boulders. Just above this point of contraction is the City of Saguenay, known earlier as Chicoutimi, which around the turn of the nineteenth century was home to paper mills that produced 100,000 tons of wood pulp annually. During this period, the Saguenay River was used not only by vessels laden with lumber products but also by the Richelieu and Ontario Navigation Companys passenger steamers, which called at Chicoutimi several times a week during the summer.

To help mariners locate the entrance to the Saguenay River, a lighthouse was erected in 1872 on Lark Islet, situated just off the southern side of the rivers mouth. The following year, the government provided five pairs of range lights to mark the turn in the river just below Chicoutimi. The Quebec firm of Price Brothers and Company, which owned the lumber operations in Chicoutimi, maintained these lights until the government hired keepers for them in 1875. These lights originally appeared as 1st Range through 5th Range in the List of Lights, but they were later given the following official names: Poste-Saint-Martin (front, rear), Rivière Valin (front, rear), Rivière du Caribou, Savard Range (replaced by Simard Range in 1912), and Rivière-du-Moulin (front in 1906, rear in 1906). These five range lights remain active today, though modern towers are now in use.

In 1875, a pair of range lights was established on Pointe Noire (Black Point), the southern point at the entrance to the Saguenay River. The range lights on Pointe Noire are still active but are now displayed from modern towers. Pointe Noire is located within the Saguenay  St. Lawrence Marine Park and is home to the Pointe-Noire Interpretation and Observation Centre, where visitors can use telescopes to identify marine animals and bird life in the area.

The next light to be erected to guide traffic on the Saguenay River was at Grosse Roche, roughly twenty kilometres above the mouth of the river. This square dwelling with a square tower centered atop its hipped roof was built in 1906. Grosse Roche Lighthouse was built on a spot of land six feet above high water mark and thirty feet from the rivers edge, and stood thirty-five feet tall from its base to the ventilator atop its lantern room. A fixed white light from a sixth-order Fresnel lens was displayed at a focal plane of thirty-six feet and was visible for ten kilometres upstream and downstream.

The final manned lighthouse to be built on the Saguenay River was at Cap à lEst, a critical turn thirty-one kilometres below Saguenay, where Ha! Ha! Bay branches off from the river. Built in 1909, Cap à lEst Lighthouse is a thirty-three-foot-tall, octagonal, reinforced-concrete tower surmounted by an octagonal lantern. The construction was performed by days labour under the supervision of H de Haan at a cost of $2,636.16. A sixth-order Fresnel lens initially beamed forth a fixed white light under the care of G. Sergerie, its first and only keeper. In 1917, Aga equipment was installed in the lighthouse, changing the characteristic of the light to a white flash every three-and-a-half seconds and allowing for the automation of the light. Today, the light has a signature of a flash every five seconds.

Of the many once-manned lights that have guided mariners along the Saguenay River, Cap à lEst Lighthouse is the only one that hasnt been replaced by a modern tower. The Canadian Coast Guard services the light by helicopter using a landing pad adjacent to the lighthouse.

For a larger map of Cap à l'Est Lighthouse, click the lighthouse in the above map.

Take Highway 172 east from Tadoussac (North side of the road Fjord), and then turn left at kilometre 88 where you will see a sign for Outfitter Cap au Leste. From the turnoff, it is 7 kilometres to the lodge. A trail leads to the lighthouse from La Pourvoirie du Cap au Leste.


I would really recommend spending the night at Cap au Leste if you plan on visiting the lighthouse. The resort's dining room has an amazing view overlooking the Saguenay River, and the rooms, located in seven lodges hidden in the surrounding woods, are quite nice. The room I stayed in just happened to be in Naskapi, the lodge adjacent to the Sentier du Phare trailhead. Depending on the amount of time you have, you can either hike to the lighthouse and return on the same trail, or continue past the lighthouse and make a loop.

When driving along a road on the opposite side of the Saguenay River, I came across this Cap à l'Est Lighthouse school bus stop that was built in 2010, the 100th anniversary of the lighthouse.