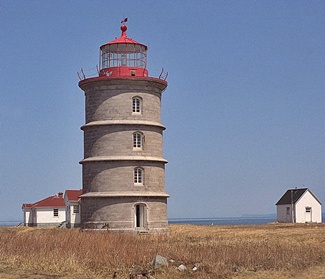 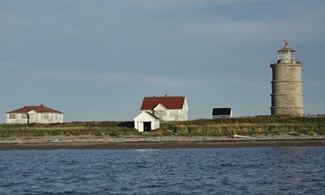 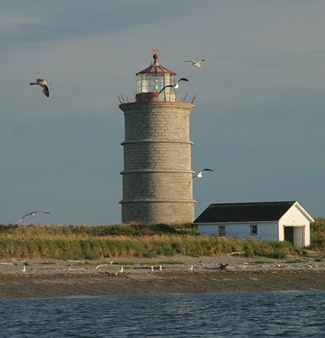 In 1846, Charles E. Casgrain, Deputy Commissioner of Public Works, wrote a letter to Trinity House Quebec lamenting the number of shipwrecks and the loss of property that occurred in the lower portion of the St. Lawrence River, especially during severe autumn weather. Casgrain requested that the Trinity House Board recommend locations where additional lighthouses might be erected if not for preventing, at least for diminishing the number of calamities. After receiving this letter, the Board applied to the government for £6,000 to be used for various projects, including the construction of a lighthouse on Red Island (Île Rouge). A site for the lighthouse was selected around the end of May 1847, and construction of the tower was carried out over the next two years. Three stone lighthouses were built along the St. Lawrence River in the 1840s, and all were designed by Charles Atherton and constructed under contract by Joseph Archer. Stone Pillar Lighthouse was completed in 1843, and Île Bicquette Lighthouse commenced operation in 1844. Perhaps lessons were learned from these earlier towers, as Red Island Lighthouse, which was put in service in late 1848, is the most visually pleasing of the three.

Built of smooth ashlar stone, Red Island Lighthouse is encircled by three evenly spaced stringcourses, a decorative element that divides the tower into four levels and also helps preserve the structure by preventing water from running down the length of the tower. Each of the upper three levels of the fifty-one-foot tower has an arched window aligned vertically above the towers arched entrance. An imported lantern room and a lighting apparatus made up of twenty-four lamps and reflectors topped off the tower.

It seems that Joseph Archer failed to complete the contract in an agreeable manner, as an account of disbursements for 1849 included a small sum for protesting against Joseph Archer, the Builder. This same account shows that William Smith, who had superintended the project, was also paid to complete the lighthouse.

In 1869, a select committee on fisheries and navigation submitted a report to the House of Commons that included responses to a set of forty-six questions posed to practical fishermen and shipmasters. In replying to a question on what improvements to navigational aids could be made, Walter Gibb, master of the barque John Bunyan and who had been sailing to Quebec for over thirty years, stated, I refer to that of Red Island, where numbers of ships are lost and stranded every year, attended in many cases with loss of life. I would recommend that very poor red light to be condemned and a flash light of the first class to be established, also a light vessel on the east of the shoal. This alteration is greatly and positively needed.

Though it took some time, Gibbs suggestions were eventually carried out. In 1876, the lights twenty-four No. 1 flat-wick lamps were replaced by twelve mammoth flat-wick lamps, which change was pronounced a great improvement. The lights characteristic remained fixed red until July 1, 1890, when a revolving apparatus was installed to produce the following flash pattern: three white flashes with intervals of ten seconds between their point of greatest brilliancy, followed by a thirty-second eclipse. In 1916, a quadruple long focus reflector was installed, changing the lights signature to twelve-seconds of white light intensified with four flashes followed by a twelve-second eclipse.

On July 1, 1871, a staunchly built iron vessel, painted red with Red Island Light Ship in white letters on each side, was moored northeast of Red Island in ten fathoms of water. The total cost for the lightship was roughly $36,000, and she was placed under the command of Captain Joseph Levesque, an experienced pilot. The lightship initially displayed a fixed white light atop its foremast, but starting in 1873 a second light was displayed from the mainmast to distinguish her from other vessels lying at anchor. To assist mariners in times of fog, the lightship was equipped with a steam whistle that sounded a ten-second blast every minute when needed. In 1876, it was noted that since the establishment of the lightship no wrecks had taken placed in the locality, where formerly so many lives and valuable property were lost each year.

While sailing from her station at the end of the shipping season, the lightship encountered a great storm on November 18, 1873 and was driven aground on White Island Reef. The captain and crew spent twenty-four hours on the wreck before, with great difficulty, they boarded a boat and made their way through ice to the south shore. A government steamer was dispatched to the wreck, and when the lightship couldnt be freed, it was stripped of everything that could be salvaged. During the winter, the lightship was overturned by the action of the ice, and her two masts were broken. The vessel was raised the following spring and repaired at a cost of $22,000. Captain Levesque drowned during a gale on October 16, 1876, while crossing from the mainland to the lightship. David Levesque, Josephs brother, took command of the lightship for the remainder of the season.

The first keeper of Red Island Lighthouse was Augustin Dufour, who served from 1848 to 1850. Hubert Fraser moved his rather large family into the keepers dwelling in 1850 and gave the following description of their accommodations, which were connected to the tower by a covered passageway:

Apart from its small size, I can assure you that seven or eight feet from the stove, water freezes to ice and that in the cupboards, food also freezes. On the 16th December, therefore, we were obliged to leave this dwelling and take refuge in the tower. I therefore, leave, it to you, Sir, to judge whether a family of thirteen could have been comfortably housed therein.

After a decade of service Keeper Fraser and his son Daniel drowned in 1860. Gilbert Lindsay, served at Red Island from 1860 to 1867, when he was transferred to nearby Green Island to replace his father Robert Noel Lindsay.

In 1876, in addition to the circular stone tower, the following structures were also found at the station: a white brick dwelling house with a red roof, a wooden oil shed, and a wooden storage shed. A fog alarm, housed in a large frame structure, was added to the station in 1945. The original dwelling was demolished in 1965 and replaced by two bungalows.

Red Island Lighthouse and nearby Prince Shoal Lighthouse were the last two staffed stations in Quebec, but they both lost their keepers in 1988.

In the late 1990s, the station was restored and overnight stays were offered in the keepers dwellings at a price of $530 per couple, which included a five-course dinner, breakfast, and transportation to the island by zodiac. This opportunity was only offered for a few years, and the station has once again been left to deteriorate. Red Island is now part of the Saguenay-St. Lawrence Marine Park.

For a larger map of Île Rouge (Red Island) Lighthouse, click the lighthouse in the above map.

A very distant view of Île Rouge Lighthouse can be had, on a clear day, from Tadoussac or from Pointe Noire. Whale watching boats from Tadoussac and Baie-Sainte-Catherine may pass by the lighthouse. Trips are available from Croisiéres AML and Croisières Groupe Dufour.