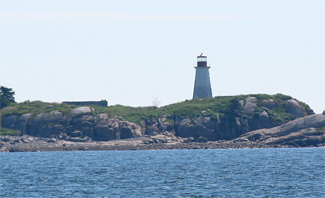 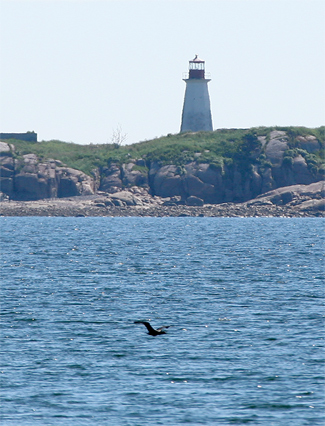 As part of Queen Annes War, the North American theatre of the War of Spanish Succession, a surprise attack on Quebec was planned by the British. A formidable force, led by Admiral Hoveden Walker, sailed from England in the spring of 1711, and, after obtaining provisions in Boston, embarked for the St. Lawrence River on July 30. Supplemented by the colonies, Walkers fleet consisted of nine ships of war, two bomb vessels, and sixty transports and tenders, carrying 7,500 troops and roughly 6,000 sailors. On the morning of August 18, 1711, the expeditionary force approached the mouth of the St. Lawrence River, but a strong northwest wind forced Walker to seek shelter in Gaspé Bay. On the 20th, the wind shifted, allowing the fleet to proceed along the southern shore of Anticosti Island. After Walker had passed the western end of the island, the wind died, and the fleet was blanketed in fog. The wind freshened on the 22nd, causing breaks in the fog, and Walker ordered the fleet to sail southwest that evening, thinking he was then in midstream. In actuality, Walker was near Egg Island (Île-aux-Oeufs) on the rivers North Shore, and seven transports and one supply ship were driven against the islands rocky shore and lost before the wind shifted and allowed the rest of the fleet to alter course. Around 800 men perished in one of the worst naval disasters in British history, and Walker was forced to abandon his plans.

In 1868, a committee on fisheries and navigation submitted a list of questions to fishermen, shipmasters and collectors of customs in various parts of Canada. Included in the questions was a request for them to state where additional lighthouses, guns, fog bells, or whistles were required. A. Riverin, who fished for herring, cod, salmon, and trout along the North Shore, informed the committee that the coast between Trinity Bay and Seven Islands was dangerous, especially in an east or southwest wind, and recommended that a revolving light and a gun should be established on Egg Island to enable vessels to approach the coast without danger.

Work on a lighthouse for Egg Island began during the summer of 1871, and its light was first exhibited on October 23rd, though the lighthouse would not be completed until the following year. The lighthouse, which stood 600 feet from the southern end of the island, consisted of an octagonal tower surmounting a keepers dwelling and measured thirty-five feet from base to vane. A revolving light, whose two faces each had two lamps set in twenty-inch reflectors, was displayed from the lantern room at a height of seventy feet above the water. The light attained its greatest brilliancy every ninety seconds and could be seen up to fifteen miles off. J. B. Spence built the lighthouse under a contract for $2,000, while the total cost for the structure, including the lantern and lighting apparatus, through June 30, 1872 was $3,830.21.

Paul Côté received an annual salary of $500 to serve as first keeper of the light, which consumed about 300 gallons of oil per season. The heroic action of Keeper Côtés family, as described in the following account carried in Harpers Weekly, was brought to the attention of the Minister of the Department of Marine and Fisheries in Ottawa by the Marine Agent in Quebec City.

All sailors know how important it is that a flash light should revolve with mathematical accuracy; otherwise one light might be taken for another, and a wreck might be the fatal consequence of such an error. One night, toward the close of the autumn of 1872, a pivot broke in the clock-work regulating these revolutions. The season was too far advanced to get help from the Ministry of Marine at Quebec; the only thing to be done was to replace the machine by human energy, and the keeper and his family devoted themselves to the task. During five weeks of that autumn and five other weeks of the next spring, man, wife, girls, and boys turned the machine by hand. Cold and fatigue stiffened the hands, sleep weighed on their eyelids, but nevertheless they must turn, turn, without haste and without rest, all through those long watches, in which the order was to become an automaton and keep turning the machine. Not one, from the child to the master, either complained or shirked his duty, and the light at Egg Island continued each minute and a half to flash its protecting light over the tempestuous Gulf.

In 1873, the light tower was stayed with wire rigging, but in 1877 it was declared to be in a very unsafe condition, as its unsteadiness during strong winds would cause the revolving apparatus to stop. The tower had been a constant source of expense and trouble since being erected, and William Barbour, the district engineer, proposed that a new tower be constructed at Quebec City and sent down on the fall trip of the Druid later that year. Though defective, the tower had served mariners well, as a report in 1876 noted that no shipwreck had occurred near Egg Island, an area previously noted for its frequency of wrecks, since the light was established.

A stout, first-class, octagonal tower was delivered to Egg Island in the fall of 1877 and placed adjacent to the existing keepers dwelling. This new tower, which cost $2,428.93, stood fifty feet, base to vane, and was topped by an iron lantern with a diameter of ten feet. The remnant of the original tower likely accounts for the unique shape of the lighthouse seen in the historic images on this page. Sometime before 1904, a single, vertical red stripe was painted on the white tower as a daymark.

Being a religious man, Keeper Côté established a chapel in the lighthouse so that missionaries and priests passing along the North Shore could stop and celebrate mass or provide religious services for his family. Archbishop F.X. Bossé, Prefect Apostolic of the Gulf of St. Lawrence, dedicated the chapel in 1874. Keeper Côté served until 1901, when Tancrèd Pelletier, his son, succeeded him.

Elzéar Chouinard, a native of the Caribou Islets, took charge of the lighthouse in 1911 as its third keeper. Six of Elzéars daughters were married in the lighthouse chapel before he retired in 1937 at the age of seventy. M. Émile Chouinard took the place of his father and kept the light on Egg Island until 1958, when he transferred to the lighthouse at Metis-sur-Mer. It was during Emiles service that Arthur Lafontaine and Ovide Fortin built a concrete tower on the island in 1955.

M. Ange-Henri Dugas, a grandson of Elzéar Chouinard, held the office of keeper from 1958 to 1965, when the fifty-four-year-long lightkeeping legacy of the Chouinard family came to an end. The final keeper at Egg Island was M. Francis Poulin, who served from 1965 until the station was de-staffed in 1969. The keepers dwelling was demolished during the early 1970s. The only inhabitants of the island now are numerous birds for whose byproduct the island was named.

For a larger map of Île aux Oeufs (Egg Island) Lighthouse, click the lighthouse in the above map.

Île aux Oeufs Lighthouse can be seen by taking a small dirt road east toward the shore from QC-138 just south of kilometre marker 886 and just north of Petite Rivière du Calumet.