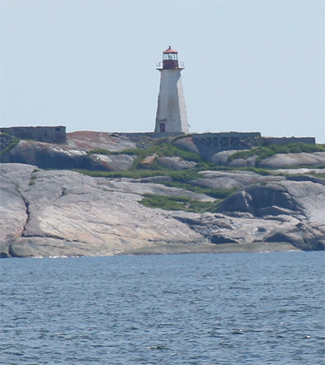 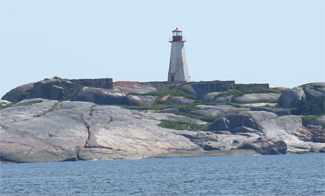 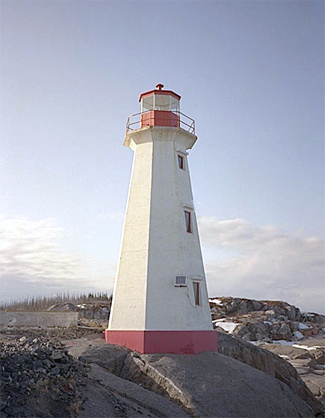 The following description of the Cawee Islands, which lie roughly midway between Pointe-des-Monts and Sept-Îles, was provided for mariners in the 1837 Sailing Directions for the Gulf and River of St. Lawrence by Captain Henry Bayfield of the Royal Navy.

The Cawee Islands are two small and hilly islands of grey granite, and nearly bare of trees. Great Cawee Island, which is the largest, the highest, and most to the eastward, is about three-quarters of a mile in diameter, and estimated to be about 250 feet high. Little Cawee Island, lying a mile further to the south-westward, is composed of two contiguous islets, which occupy a length of half a mile parallel to the coast; it has several rocks above water close off it to the S.W., and a reef 120 fathoms to the north and N.W. of its west point. Both of these islands are bold as a wall to seaward, but there is a small and high round rock a quarter of a mile S. W., from the south point of Great Cawee, and this is the only danger between the islands, being, like their southern sides, so bold that a large ship might lie alongside of it.

Fishermen were attracted to the area around the Cawee Islands as evidenced by the following report on the fisheries in 1858:

The Cawee Islands are situated near the coast between Trinity Bay and that of the Seven Islands, and afford to vessels excellent anchorage and shelter for all winds.

This circumstance, as well as the number of fish caught in the neighbourhood, induces our fishermen to go and settle there.

For some years since, more than a hundred fishermen from the Bay of Chaleurs, with 40 fishing boats have made, on the Cawee Islands and the adjoining coast, fishing settlements where more than 5,000 quintals of cod have been prepared.

A small anchorage was located on the northwest side of the roughly triangular Great Cawee Island (Île du Grand Caouis), and in 1927 a lighthouse was established on the island to mark the anchorage and help guide ships along this section of the coast. This lighthouse, built on a mound of rock rising about eighty feet above the water, consisted of a square, two-storey dwelling, with a square tower rising from the center of its hipped roof. Calixte Dupuis received an annual salary of $1,890 to serve as keeper of the new lighthouse, which replaced an unwatched gas occulting white light that had previously marked the island.

This photograph, from an article entitled "Lighthouses along the St. Lawrence" appeared in the May, 1953 edition of News on the DOT, the Department of Transport's staff publication, and shows Rene Arial repairing the station's radiophone windcharger. Lightkeeper Robert Savard was living on the island with his family at this time.

A unique fog alarm in the form of an acetylene gun or canon was used on Île du Grand Caouis. This device consisted of two 1.8-metre-long, metal tubes connected one on top of the other and attached to a conical iron base. A tank fed acetylene gas into the iron base where it was periodically exploded, and a valve allowed the keeper to activate or deactivate the device. The fog alarm was housed in a wooden shed, resembling an outhouse, and the upper portion of the metal tubes projected from the shed's pitched roof.

In 1955, a forty-seven-foot-tall, concrete, octagonal tower was constructed on the southern point of Great Cawee Island by Marcel Cauvier & J. E. Keays, along with a dwelling, to replace the original wooden lighthouse. The station was automated on April 1, 1970, and the keeper's dwelling was subsequently removed. Today, a light with a signature of a white flash every six seconds is exhibited from the red lantern room atop the white tower.

For a larger map of Île du Grand Caouis Lighthouse, click the lighthouse in the above map.

A distant view of the lighthouse is possible by turning southeast from QC-138 onto a dirt road between kilometre markers 918 and 920. The road is marked by a sign that reads "Pointe au Luc avec Kayak." Follow this road to the southeast end of the peninsula, where you will find the Association Pointe-Á-Luc campground. There is a stop sign and a sign that reads "Entry Forbidden" at this point, but I believe it is permissible to continue along the road to the east on foot. When you approach the shore, you will see Île du Petite Caouis, and you will need to continue a bit north until you can get a view of Île du Grand Caouis.


I didn't know if a view of Île du Grand Caouis Lighthouse was even possible from the shore but decided to check out the dirt road that ventured toward the island from QC-138. When we reached the sign that read "Entreè Interdite" at Pointe-Á-Luc, we assumed this applied to cars and decided to continue along the road on foot. It wasn't long until we saw some campers at the point. I exchanged a head nod with one of the guys and figured that was permission to continue farther. Not long thereafter, we were startled by a gunshot, but it didn't seem to be aimed in our direction, so we trudged onward. After reaching the eastern shore, we could see a lighthouse-less island offshore, but we continued a bit north, climbing some granite rocks, and were soon rewarded with a distant view of Île du Grand Caouis Lighthouse.