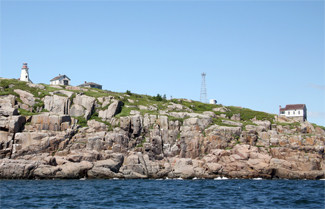 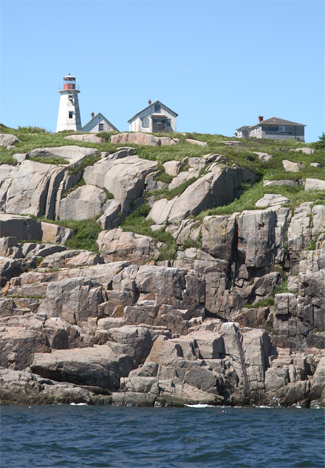 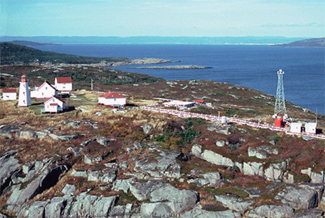 Situated on a large bay just north of the fiftieth parallel, the City of Sept-Îles is named for the seven islands located just offshore. These islands are:

Île du Corossol is the outermost island in the Sept-Îles Archipelago and was an ideal spot for a lighthouse to mark the entrance to the bay, which was described as being sufficiently extensive for the largest fleet to lie in perfect safety, and so nearly land-locked as to resemble a lake. In 1870, Andrew Gingras built a wooden keepers dwelling surmounted by a square tower on Île du Corossol under a $3,700 contract. The total cost of the lighthouse, including plate glass, lamps, and reflectors, came to $4,145.80.

The lighthouse, known as Seven Islands Lighthouse in the Department of Marine records, displayed a fixed white light on the catoptric principle, with two No. 1 circular burner lamps and one No. 1 flat-wick burner lamp and three fifteen-inch reflectors. Keeper A. Reverin displayed the light for the first time on October 15, 1870, but it failed to satisfy mariners during its first year of operation. A proposal to increase the number of lamps in the lantern room was made, but before this was carried out, one of the lamps in the lantern room exploded on August 13, 1872 and burned the lighthouse down.

Parliament didnt appropriate funds to replace the lighthouse until 1874, and that July Commander N. Lavoie and two coasting captains visited Île du Corossol to find the most advantageous spot for the new lighthouse. Lavoie reported, after weighing attentively the reasons which were brought forth in favor of such and such a spot, we all came to the conclusion that there could not be a better site for a lighthouse than the old one. The site on which the former lighthouse was built, and on which, in my opinion, the new lighthouse should be erected, is about 200 feet high, at about three-quarters of the height of the island, on a level ground, the summit of the angle which ends the most advanced point of Carousel Island, a site which is seen by all vessels coming from any direction in the Gulf.

Lavoie also included in his report his understanding of why the previous light had been unsatisfactory.

I beg to state here that the bad light was not due to the bad site on which the lighthouse was built, or to the lamps but to the construction of the upper chambers of the lighthouse, which were too small for the apparatus. I have seen and examined the Seven Island's Light very frequently at all hours of the night, and in every kind of weather, either while passing through that part of the Gulf of St. Lawrence, or at anchor in the Bay of Seven Islands, and have always remarked that the light was as brilliant as could be during the first hours of the night, and then decreased to the pale light of a candle during the remainder, which circumstance can, I believe, be very easily explained. when the keeper gave a little more fire to the lamps, the room became overheated and soon filled with a warm vapour that condensed on the glass kept cold by the exterior temperature, which accounts for the circumstance that when the light was seen a couple of hours after, it would appear like as if it had passed through a cloud of smoke.

A new lighthouse, consisting of a square, wooden tower attached to a keepers dwelling, was built during 1875 and put into operation on June 1, 1876 by Keeper Flavian Arcand, who was paid an annual salary of $500. The total cost of the lighthouse was $4,205.66, with $2,550 paid to R. Cameron for building the lighthouse and $1,463.79 sent to E. Chanteloup for providing the lantern, lamps, and lighting apparatus.

The new lighthouse measured thirty-nine feet, from base to vane, and its fixed light had a focal plane of 200 feet. After a short time, three lamps were removed from the lantern as the excessive heat was breaking the lantern room glass. This left five circular wick lamps, set in eighteen-inch reflectors, and three flat-wick lamps in seventeen-and-half-inch reflectors. Even with this reduction in power, the light was pronounced much superior to the former one. Two more lamps, one of each type, were removed from the lantern room in 1877 as the heat was still breaking the glass. In 1881, the lighthouse, which was painted white with a red lantern, was given a distinctive horizontal red band.

Starting on August 14, 1903, cotton powder bombs were exploded every ten minutes as needed from a jib located 300 feet southeast of the lighthouse. In 1906, a rectangular, wooden fog alarm building was built on the island and equipped with a three-inch duplicate diaphone plant purchased from the Canadian Fog Signal Company of Toronto. The horn projected from the southern gable of the building at an elevation of 184 feet and sounded a five-second blast in every ninety seconds during periods of fog.

An inclined railway was built on the island in 1907 to transport supplies from the storage shed and derrick at the landing to the lighthouse, which was about a quarter of a mile away. That same year, a new oil store, equipped with galvanized tanks for storing coal oil, was also built.

Following World War II, interest developed in the iron ore located in the hinterland north of Sept-Îles. Between 1950 and 1954, the 357-mile-long Quebec North Shore and Labrador Railway was constructed to link Sept-Îles with the mines at Schefferville. With trainloads of iron ore arriving regularly, Sept-Îles quickly became a thriving port, second only to Vancouver in terms of yearly tonnage.

To serve the ore carriers calling at Sept-Îles, the station on Île du Corossol was modernized in 1953 with the erection of an octagonal, concrete lighthouse by Continental Construction and the completion of two new keepers dwellings.

The island had been designated a migratory bird refuge in 1937, and Marcel Gallienne, the last keeper to serve on the island, doubled as an auxiliary wildlife protection office. The Gallienne family played host to numerous researchers, who came to study or count the birds.

For a larger map of Île du Corossol Lighthouse, click the lighthouse in the above map.


We took a tour of the Seven Islands on a zodiac with Les Croisieres du Capitaine. The wind was brisk that day, and as a result the seas were quite rough. We visited the commercial fishing harbour and then headed out to Grosse Boule and Petite Boule, where we learned about an oyster farm. Next, we made the run over to Île du Corossol, where we were told we would be able to see the lighthouse if the sea wasn't too rough. We did make it around the island, but it was indeed choppy in front of the lighthouse. I thought the boat would stop, but it didn't because of the seas. I was seated on the outer rubber tube of the zodiac so had to hold on to a rope and snap a few pictures while being sprayed with water. Not the best picture-taking conditions, but it was a fun trip. There were plenty of seabirds around Île du Corossol, and after we arrived on the protected side of the island we were shown the camp of Marcel Gallienne, the last keeper. He and his family are reportedly the only ones allowed on the island. After the two-hour boat tour, we were dropped off on La Grande Basque, where we hiked around and dried out for an hour, before heading back to Sept-Iles.