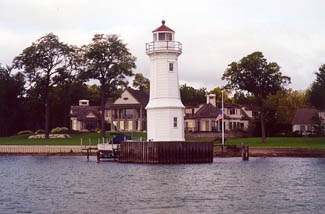 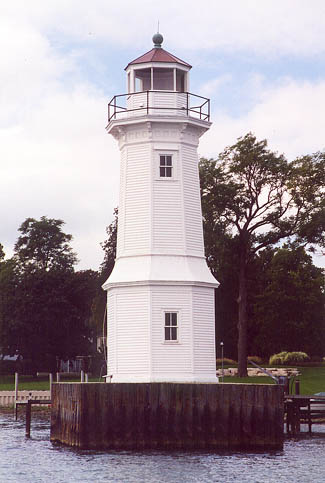 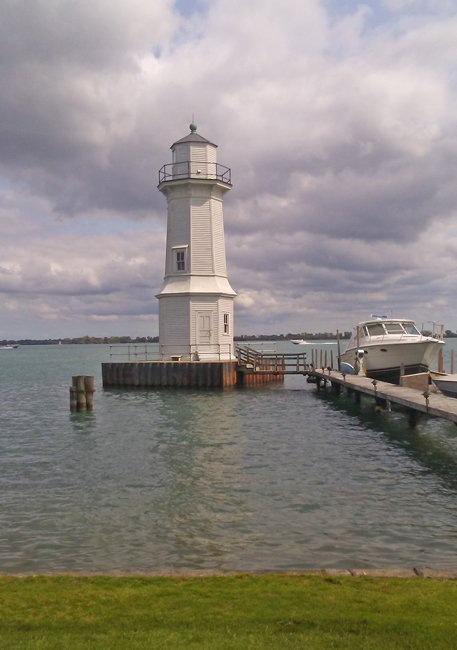 Grosse Ile, French for Large Island, is the largest island in the Detroit River and the most populated island in Michigan. Brothers William and Alexander Macomb purchased the island from Pottawatomie and Wyandotte Indians in 1776 and subsequently leased sections of it to farmers. After the War of 1812, many of the farmers left for Canada, when the island became part of the United States. Two sets of range lights, the Grosse Isle South Channel and Grosse Isle North Channel, have been used to server mariners sailing along Grosse Isle. The only historic structure remaining from these ranges lights is the discontinued Grosse Isle North Channel Front Range Light. The South Channel Range Lights remain active, but modern skeletal towers have replaced earlier wooden structures.

In 1887, the Lighthouse Board requested $7,000 for range lights on the northern end of Grosse Isle to guide mariners by Ballards Reef, a dangerous obstruction on the east side of the island on which a private light had been serving mariners for some time. Congress provided the requested amount on March 2, 1889, and Grosse Isle Range was established on April 20, 1891. The following description of the range appeared in the Annual Report of the Lighthouse Board for 1891.

The towers are composed of columns, sockets, struts, and tension rods framed in the form of a triangular pyramid. Each tower has a triangular foundation plate which is bolted to the timber foundation. The top section of the side facing the channels, for which the towers are the guide, are provided with horizontal slats and an oblong gridiron 12 by 15 feet in plan, to increase the visibility of the ranges by day. The light, a five day lens lantern, which runs up and down the ladder in the plane of the structure, is housed by day, and at night is hoisted to its place at the apex of the triangle by machinery and counterpoise weight, worked in a small cubby house. The lights are 1,493 feet apart, and mark the range line for running the main channel of the Detroit River from Lime Kiln Crossing to a point southerly of Mamajuda light. The front light is 71 feet above mean low water and the rear light is 103 feet.

An old keepers dwelling at Mamajuda Lighthouse was renovated for the use of the keeper assigned to Grosse Isle Range, even though having the keeper reside on Mamajuda Island, across the channel from the range lights, was not ideal.

On August 5, 1892, Congress appropriated $2,500 for a second set of range lights on Grosse Isle. The first set of range lights was located on Hennepin Point, on the currently uninhabited northern end of the island. A site roughly a mile-and-a-half to the south was purchased for the new rear light, and a submarine site for the companion front light was ceded to the United States by the State of Michigan. This second pair of range lights was established on July 16, 1894, and since it guided mariners through a channel north of Grosse Ile, it was named Grosse Isle North Channel Range. With the establishment of the new range, the original Grosse Isle Range was renamed Grosse Isle South Channel Range.

The towers for the North Channel Range were originally open framework, but they were enclosed by July 1895. As funds were insufficient to construct a dwelling for the keeper, he was forced to live in a small frame structure intended as a storehouse that was located near the rear tower.

The rear iron tower of the South Channel Range was blown over on September 3, 1894 and completely wrecked above its second section. A temporary, seventy-eight-foot-tall wooden tower was hastily erected, and new square, pyramidal, enclosed, wooden towers, surmounted by octagonal lantern rooms, were built to serve the South Channel Range. The new range lights were put in use upon the opening of navigation in 1895. The front light had a focal plane of thirty feet and the rear light fifty feet.

At the opening of the shipping season in 1902, the color of the South Channel Range Lights was changed to red to make them distinguishable from the many white lights in the neighborhood, and later that year, a mud embankment, twenty feet wide, four feet high, and topped by a plank walk was built between the two lights.

In 1898, a walkway, four feet wide, 170 feet long, and equipped with an iron handrail, was built atop a row of piles between the North Channel Front Light and the shore. An enclosed boat slip was also constructed at the same time on a platform linking the lights foundation to the walkway. In 1902, an iron oil house was built on a concrete bed near the front light.

Congress finally provided $3,500 for a keepers dwelling for the North Channel Range on February 24, 1903. Bids were solicited for its erection, but when opened on July 20, 1903, they were all found excessive, and the work was done instead by hired labor. The dwelling was built adjacent to the rear light. In 1904, the keepers dwelling for the South Channel Range was relocated from Mamajuda Island and placed 100 feet northwest of the South Channel Front Light. A square, iron oil house was also erected for the South Range in 1904.

The South Channel Range Lights were changed in 1912 from fixed red to flashing red acetylene lights. With this change in the lights, a resident keeper was no longer needed, and Charles D. Northrup, who had been in charge of the range since 1898, was reassigned to Ecorse Range, located a few miles upstream. In 1916, the back and sides of the South Channel Range towers were painted brown, while the front side facing the range line remained white.

The North Channel Range Lights were rebuilt on concrete foundations in 1906. This work resulted in the present wooden, octagonal tower being constructed for the front right. In 1917, the North Channel Rear Range Light was discontinued, but the front light was retained, its intensity increased, and its named changed to Grosse Isle Lighthouse.

James T. Story, who had been in charge of North Channel Range since 1911, stayed on as the keeper of Grosse Isle Lighthouse and served in this role until 1920, when the light was automated and he was transferred to Windmill Point Lighthouse. By 1921, automated acetylene lights set atop twenty-five-foot-tall steel towers had replaced the lighthouses on Detroit River at Mamajuda, Grassy Island, and Ecorse.

Grosse Isle Lighthouse was decommissioned in 1963, and two years later Grosse Ile Township purchased the tower from the U.S. Department of the Interior using funds from the Grosse Ile Historical Society. Restoration of the lighthouse started in 1984, when a steel, sheet-piling foundation was placed around the towers corroded foundation and filled with 100 yards of concrete. The tower has since received a new copper roof and been painted on more than one occasion.

For a larger map of Grosse Ile (North Range) Lighthouse, click the lighthouse in the above map.

Grosse Ile Lighthouse cannot be readily seen from land due to recent housing construction. We chartered a boat from the southern end of Grosse Ile Island to take us by the light. Grosse Ile Historical Society opens the lighthouse on the Sunday after Labor Day.

The lighthouse is owned by the Township of Grosse Ile. Grounds/tower closed except during annual tour.