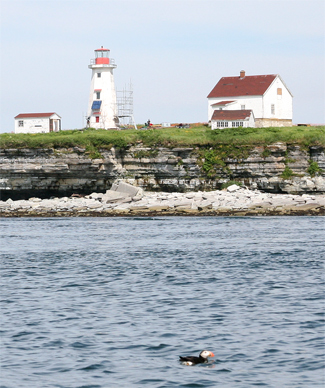 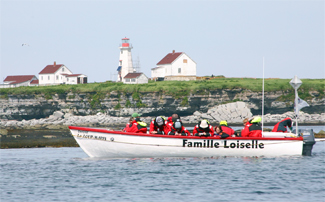 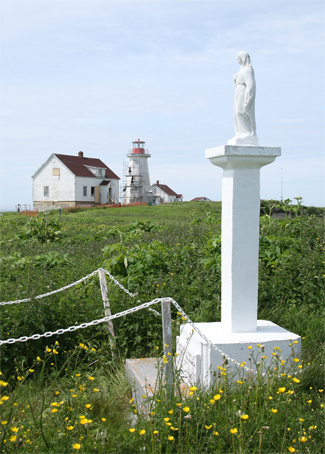 The 1888 Annual Report of the Department of Marine and Fisheries contained the following information on Île aux Perroquets Lighthouse:

During the past season a lighthouse was erected on the northwesternmost of the group of four islands known as the Perroquet Islands at the western extremity of the Mingan group, on the north coast of the Gulf of St. Lawrence, and was put in operation on the 1st September. The light is revolving white and attains its greatest brilliancy every 30 seconds. It is elevated 87 feet above high water mark and should be visible 15 miles from all points of approach, excepting where intercepted by Mingan Island. The illuminating apparatus is catoptric. The building consists of a square wooden tower with dwelling attached, painted white, surmounted by an iron lantern painted red. It is 55 feet in height from the ground to the vane on the lantern. The building stands 83 feet from the northern cliff and 228 feet from the western cliff of the island. The cost of erection, including lantern and illuminating apparatus was $7,816.12.

Île aux Perroquets is faced with cliffs and covered with a layer of peat in which great numbers of puffins burrow and rear their young. Due to the puffins large, colourful bill, it is known as the sea parrot, or in French, perroquet de mer.

Henry de Puyjalon was hired as the first keeper of Île aux Perroquets Lighthouse at an annual salary of $400. Born in a castle in Brittany, Count Henry de Puyjalon left France in 1872 for Canada. He married Marie Élizabeth Angélina Ouimet, daughter of a former Premier of the Province of Quebec, in 1882 and eventually settled on the North Shore. Henry became the provincial Inspector-General of hunting and fishing, and his love of nature later led him to take the position of keeper at Île aux Perroquets.

Henry de Puyjalon wrote the following about his wife and the birth of their son on the island.

I love her... because she is devotion personified; because she harbors no intentions other than mine.

I love her because she has followed me everywhere, because she would still follow me wherever I would choose to go. And believe me, having followed where I have gone, lived where I have lived, was no sinecure with each day providing a harvest of spiritual and bodily comforts.

She suffered hunger with equanimity at my Riviére-a-Vachon encampment. She endured, without complaining, cold and storms, and the harsh anguish of childbirth on Île aux Perroquets.

It is on this desolate rock that she gave me my second son. I presided, alone, over his entry into this world; it was a cruel moment. The little gaffer took his time, and I was dying of fear while outwardly smiling. Finally, he appeared!

Raymond-Roger de Puyjalon was born on September 19, 1891, and afterward, sensing that his wife would prefer to leave their island home, Keeper de Puyjalon resigned his position. Following a voyage to France, Marie de Puyjalon agreed to return to her husbands beloved North Shore, and the family settled on Île à la Chasse, the easternmost island in the Mingan Archipelago, in 1900. Henry lived on the island year-round, but his wife spent the winters in Quebec City or Montreal so their sons could be educated.

Henry de Puyjalon tried to explain in words his attraction to the isolation and rugged beauty of the North Shore. What was I dreaming about? I do not know. I suppose it was that strange happiness that takes hold of me when I am alone in the woods, far from the idiots and, more importantly, far from the intellectuals. A noted naturalist and writer, Henry de Puyjalon passed away in 1905 and was interred on Île à la Chasse. In 1955, a commemorative plaque was placed at his gravesite, which is maintained as a historical site by Parks Canada.

After the resignation of de Puyjalon, C. E. Forgues was appointed keeper, but he and his assistant drowned less than a year later while crossing to the mainland to retrieve a doctor for Forgues' expectant wife. Forgues' wife apparently delivered the baby without a doctor. One can only imagine the emotions experience on the island at that time.

Placide Vigneau, who was born in the Magdalen Islands but moved with his family to what is now Havre-Saint-Pierre in 1858, became the third keeper at Île aux Perroquets. Vigneau kept a detailed journal, recording details of his fishing expeditions, happenings in the community, stories recounted by visitors, and events from his time on Île aux Perroquets. Thanks to Vigneaus journals, accounts of the Fox Bay Massacre on Anticosti Island, the 1891 plague of locusts, and the ghosts of Île aux Perroquets have all been preserved.

A diaphone fog alarm was established on the island in 1918 and gave a three-and-half-second blast in each minute during times of limited visibility. The characteristic of the light was changed around this time to a group of two flashes every twenty-four seconds. An octagonal, reinforced concrete tower was built in 1951 on Île aux Perroquets along with a new keepers dwelling. The present characteristic of the light is a white flash every five seconds.

Robert Kavanagh served as the penultimate keeper on Île aux Perroquets, retiring in 1976 after twenty-eight years on the island. One winter, after having closed the station at the end of the shipping season, Keeper Kavanagh and his assistant were crossing from the island to Longue Pointe at Mingan when their boats engines broke down, trapping them in the ice. Realizing their lives were at stake, Kavanagh vowed to the Virgin Mary that he would erect a memorial to her at the lightstation if she would save them. Miraculously, a channel opened up behind them, allowing them to row back to the island. As can be seen on the island today, Keeper Kavanagh was true to his word as a concrete pillar topped by a statue of the Virgin Mary was erected to protect those navigating the waters around Île aux Perroquets.

Île aux Perroquets Corporation was formed in 2010 to preserve and restore the lightstation and interpret its cultural and maritime history. The planned refurbishment of the station was determined in 2011 to have no significant adverse environmental effects, and in April 2012, tenders were invited for the rehabilitation of the lighthouse and outbuildings. Restoration work was carried out in 2012 by Construction & Ferblanterie JB of Sept-Îles.

On April 11, 2014, Île aux Perroquets Lighthouse was designated Quebec's first heritage lighthouse, meaning it has significant heritage value and will be protected. Overnight stays at the lighthouse are set to begin in 2015.

For a larger map of Île aux Perroquets Lighthouse, click the lighthouse in the above map.


Danielle Kavanagh Vibert, the daughter of Robert Kavanagh, the penultimate keeper of the lighthouse, runs Excursions du Phare along with her husband Marius. The stop at Île aux Perroquets was, naturally, the highlight of our two-island excursion. While the monoliths in the shapes of Darth Vader, Marge Simpson, and a camel on Île Nue were interesting and one of the few things that we managed to understand during the tour of the island given in French, we preferred the numerous seabirds, including puffins, found on and near Île aux Perroquets and, of course, the lighthouse, even if workers were just starting to put up scaffolding to restore the tower and other buildings. Helpful Parks Canada guides are on both islands to interpret the sites, and as most visitors to the area are French-speaking, the tours are naturally done in French. If you have a large English-speaking group, you can contact Parks Canada in advance to see if an English tour is possible.