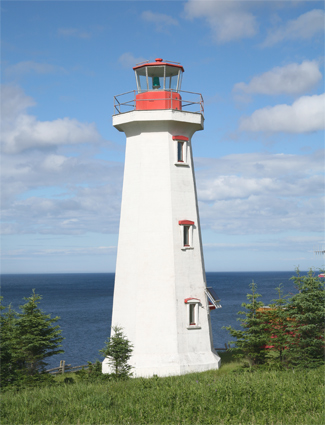 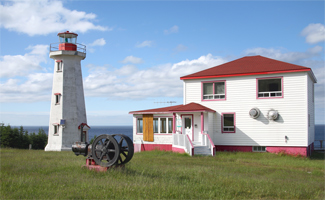 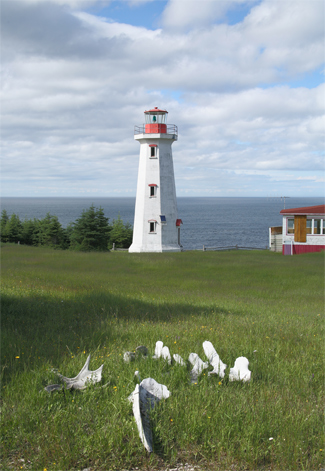 Anticosti Island, the heart of the Gulf of the St. Lawrence, is known for its beautiful untamed wilderness and unique coastal settings. Fish of all description, from the whale to the tiny capelin, can be found in the surrounding sea, while crystal clear rivers, which have carved out deep canyons, abound in salmon and trout.

The island is 135 miles long and 30 miles wide, narrowing at each end. Right smack dab in the middle of the north coastline, perched atop a fossilized cliff is Pointe Carleton Lightstation.

The invention of the steamship in the nineteenth century allowed ships to pass on the north side of Anticosti Island and through the Strait of Belle Isle, a shorter and less foggy route than its southern counterpart. Prior to that, Jacques Cartier Strait was used primarily by local fishing fleets and ships supplying the North Shore settlements.

To assist with the increased marine traffic along the strait, three lighthouses were established along the north shore of Anticosti Island in 1919: Pointe-Carleton, Cap-de-la-Table, and Cap de Rabast. These lighthouses share the same architectural design, a white octagonal reinforced concrete tower with a flared cornice, topped by a red multi-sided lantern. Enhancing the utilitarian design of the towers are a pedimented cap over the doorway and triangular lintels over the vertically-aligned windows.

With a base eighteen feet in diameter, Pointe-Carleton Lighthouse stands forty feet tall from base to vane and has a focal plane of 126 feet. Its light originally had a signature of four white flashes, spaced by four seconds and followed by an eclipse of twelve seconds. A double dwelling was built in 1918 for the keepers, along with a fog alarm building. The stations diaphone foghorn sounded a three-and-a-half-second blast in each minute as needed.

The 1920 Annual Report of the Department of Marine and Fisheries noted:

The three light and fog alarm stations on the north shore of Anticosti Island at Cap De Rabast, Charleton Point, and Table Head, built during the war, are now in permanent operation, with the result that with their aid many vessels now pass on the north side of the island, shortening the distance between Quebec and the strait of Belle Isle, inward or outward.

Pointe Carleton is considered one of the most beautiful spots on Anticosti Island. Keeper Ernest Carbonneau and his wife Alphosine raised a family at the isolated station between 1930 and 1937. The family was bilingual, speaking flawless French and English, and the two sons, Jean Paul and Lionel, were accomplished musicians and singers.

Eugène Francis, the keeper from 1948 - 1962, died tragically a couple of years after he retired, when the boat he and his son were traveling in sank off the coast of Anticosti.

In 1956, the original keepers duplex was replaced by separate residences: a square dwelling with a hipped roof and a rectangular residence with a pitched roof. A new fog alarm building was also built that same year. The light currently has a signature of one green flash every six seconds and can be seen for five miles.

Pointe-Carleton Lighthouse was automated in 1970 and declared a Recognized Federal Heritage Building in 1990. The station is currently under the care of the Sociètè de èstablissmements de plein air du Quèbec (SEPAQ), which formerly rented out the keepers dwellings. The buildings at the station were abandoned by SEPAQ in 2006, after the new McDonald Lodge was built nearby, and plans are to eventually raze the dwellings.

For a larger map of Pointe Carleton Lighthouse, click the lighthouse in the above map.

Located just off the main road on Anticosti Island at kilometre marker 116.


As Pointe Carleton is located just off the main road, we had the opportunity to see the lighthouse at various times of day and in various states of weather. SEPAQ transferred their main operation on Anticosti's north shore from the buildings at Pointe Carleton to a new facility located just 11 kilometres to the west. Known as McDonald, this new lodge is quite nice, and we did enjoy a very good meal there one evening, but it is too bad some use can't be made of the dwellings at Pointe Carleton. If they are demolished, only Cap de Rabast will retain its keeper's dwellings.

Pointe Carleton is near a couple of interesting sites that are located in Park National D'Anticosti. There had been some steady rain just before our trip to Anticosti Island, which made for some rather impressive waterfalls. Chute Vaureal, which is 24 metres taller than Niagra Falls and the second tallest waterfall in Quebec, was in fine form, but we were told that isn't always the case. The waterfall at observation canyon was also quite nice. I'd also recommend a side trip to Baie-de-la-Tour, which is bracketed by stunning cliffs.

Visiting the first week SEPAQ Anticosti was open for the year was nice as the waterfalls were still in fine form and there were not too many visitors on the island. The only drawback was that the antlers on the island's numerous bucks were still rather small.