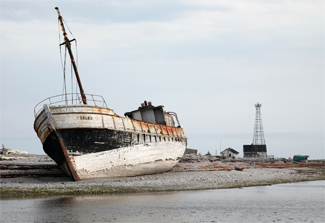 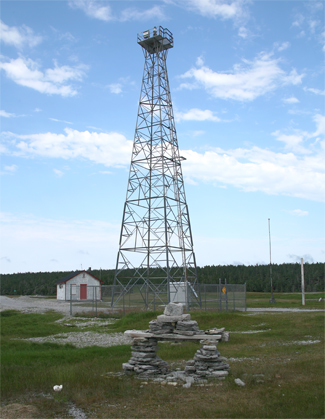 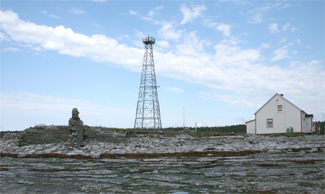 Anticosti Island has been described as a massive tongue of limestone, protruding from the mouth of the St. Lawrence River, which is swept by strong currents, buffeted by treacherous winds, and ringed by reefs that stretch some two miles offshore. In other words, the island was a nightmare for navigators.

In 1853, the government of the Province of Canada signed a contract with Charles François-Xavier Baby for the construction of lighthouses at Cape des Rosiers, Point Amour, Belle Isle, and at the extreme west point of Anticosti Island. Two other lighthouses had previously been built on Anticosti Island at Southwest Point (1831) and Heath Point (1835).

A survey found that Anticostis West Point was composed of hard and brittle limestone lying in thin, horizontal strata with innumerable seams running in every possible direction. While this stone was unsuitable for construction, it was believed a quarry could be opened up nearby to produce stone for the interior walls of the tower and attached keepers dwelling. Sand could be reportedly be obtained at Ellis Bay, twelve miles away, and timber would likewise have to be brought from a distance, as there was nothing except a forest of dwarf spruce near the point. A spring, found a mile and a quarter to the east, was believed to be a reliable source of water.

By the end of 1854, the foundations for the structures at West Point had been dug down to solid rock, a quarry had been opened a mile-and-a-half from the site, eighty toises of stone had been cut out, and a large wooden building had been erected to house the workmen. No masonry work had commenced because it was determined the sand would actually have to come from Mingan, thirty-six miles away. As a rocky reef extended well offshore, supply vessels were obliged to lie off the island for typically four or five days, and in one case nine days, before they could be fully unloaded by boats from the island

The keepers dwelling was all but completed during 1855, and the tower was carried up twenty feet above its basement. To push the work forward, arrangements were made to have twenty men winter on the island so work could be continued from four to six weeks later in the fall and started earlier the following spring.

During the winter of 1855  1856, the men were occupied dressing stone to line the interior of the tower. Once the weather warmed, work resumed on the tower, which had two layers of white fire bricks applied as its outer covering. West Point Lighthouse, which had a diameter of twenty-five-and-a-half feet at its base and gradually tapered to a diameter of just over ten feet at its top, was completed in 1856, except for the installation of its lantern room and lighting apparatus. Mechanics, who accompanied the lens and lantern from France, fitted the tower with these items in 1857 and trained the keepers in the proper care and operation of the light.

To allow time to advertise the establishment of Canadas four new major lighthouses, their lighting was delayed until the opening of navigation in 1858. West Point Lighthouse measured 109.5 feet from its base to the vane on its lantern, and its fixed white light was first exhibited from its second-order Fresnel lens on March 15, 1858. The keeper, David Ballantyne, was supplied a nine-pounder cannon to fire once per hour in times of limited visibility. In a typical season, the station consumed 220 gallons of porpoise oil for the light and 1,200 pounds of powder for the fog cannon. The keeper was provided a horse to enable him to procure water, firewood, and supplies.

In 1865, a house of refuge was constructed near the station along with a provision depot for the unfortunate souls who shipwrecked on the island. During the winter of 1868  1869, the depot was forcibly entered and two barrels of flour and sixty-eight pounds of pork were taken. An investigation was launched to find the perpetrators and make an example of them, but hunger would drive the islands residents to enact future raids on the depot. The lighthouse inspector noted the following occurrence in 1875: A number of old settlers on the island have taken forcible possession of all the provisions in the depot, and, until severely punished for such bare-faced robbery, will doubtless continue to do the same every winter.

The supply depot did actually serve its intended purpose in November of 1877, when the bark Northumbria wrecked on Anticosti Island. Those aboard the vessel were supplied with sixteen pairs of pants, thirteen pairs of boots, eleven fur caps, eighteen shirts, twenty pairs of socks, five blankets, eleven pairs of mitts, and enough pork, peas, tea, flour, and sugar to see them through the winter.

By 1870, the exterior of the lighthouse had been clapboarded, as the bricks had proven no match for the islands fierce weather. Turns out the weather wasnt the only threat to the tower, as in 1877, a breakwater, seven feet high, seven feet wide, and sixty-six feet long, had to be built to protect the tower from the sea. The breakwater was occasionally extended and repaired over the next several decades to keep the sea at bay.

Two vertical red stripes were painted on the white tower in 1881 to help mariners identify the lighthouse during the day, and that same year the interval between firings of the fog cannon was reduced from an hour to thirty minutes. In 1882, the station received a thirty-two-pounder carronade, but mariners main complaint was that the firings were still too infrequent, so starting in 1894, cotton powder cartridges were exploded every twenty minutes from a derrick erected on the roof of the gun shed. The frequency of the firings was increased to four times an hour in 1901, and when a vessels fog signal was heard in dangerous proximity to shore, a shot was fired immediately and firing continued at five-minute intervals until the vessel safely passed the station. A fog signal building was added to the station in 1924 to house a diaphone plant

In September 1907, J. U. Gregory, Marine Agent at Quebec, testified before the Royal Commission of the Civil Service that lighthouse keepers needed to be given pensions in order to attract better men to the service. Gregory had just received a letter that day from Keeper Alfred Malouin of West Point Lighthouse who wrote that he was unable to live on his present salary. Malouin, a well-educated man, had been making the same salary since replacing his father thirty years earlier, and out of this salary, he had to hire an assistant, which cost him more and more each year. To supplement his meager income, Malouin worked during the winter as an adviser for Henri Menier, the owner of Anticosti Island.

When you come to the question of superannuation, Gregory explained, it seems to be more than right that men placed in the most Godforsaken positions, where vessels are forbidden by the lights to come to, should be able after a certain number of years to retire on a pension. It is cruel to keep these men all their lives eking out a living with hardly enough to exist on.

During a severe storm in April 1900, the keepers dwelling caught fire due to a defective chimney, but the flames were extinguished with little damage. Fifty years later, the keepers werent so lucky, as a fire destroyed the living quarters attached to the tower, forcing the construction of new residences for the keeper and his assistant. These dwellings, much to the delight of their occupants, were equipped with electricity, built-in bathrooms, and modern kitchens.

In 1953, W. A. Calladine sailed aboard the C.G.S. Chesterfield as it supplied the chain of lightstations along the North Shore of the St. Lawrence River. At West Point, Calladine noted, Supplies are brought ashore by cart and horse driven out into the shallow shore waters where everything is transferred from the surf boat, requiring repeated trips back and forth. As over 150 barrels of oil had to be delivered, along with coal and food supplies (including seventeen cases of soft drinks), the horse got a good workout that day and was likely grateful to see the Chesterfield weigh anchor and sail away.

The brick and stone tower, considered by many to be the most beautiful lighthouse on Anticosti Island, was demolished in 1967 and replaced by a light mounted atop a steel tower. This modern light was automated in 1979, ending the era of the lightkeeper at West Point.

The two 1950s-era keeper's dwellings are now owned by the Municipality of Anticosti Island and are operated as Auberge de la Pointe-Ouest. Located less than thirty minutes from Port-Menier, Pointe de l'Ouest offers convenient and affordable accommodations for visitors to Anticosti Island.

For a larger map of Pointe de lOuest (West Point) Lighthouse, click the lighthouse in the above map.

From the pier in Port-Menier, drive northeast and take your first left onto Chemin Martin Zédé followed by a quick right onto Rue du Vieux Moulin. Take your second left onto Rue des Menier and continue for 1.6 km (1 mile), where you will bear right onto Chemin de la Baie Sainte Claire. Follow this dirt road for 15.9 km (9.9 miles) to reach West Point Lighthouse.


The Calou, a trawler from the Gaspe, ran aground near West Point in April of 1982 and is now a popular subject for photographers.