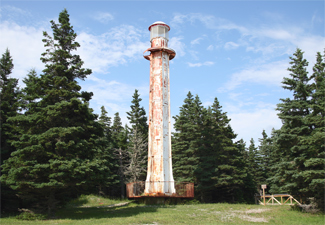 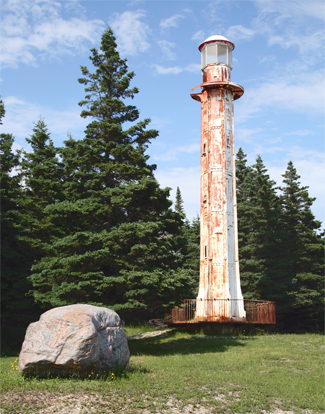 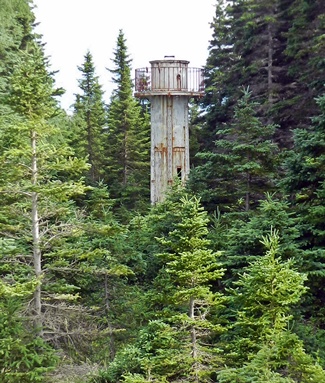 Ellis Bay, only of one two safe harbours on all of Anticosti Island, was known as Gamache Bay, prior to Henry Meniers ownership of the island. Fostering a reputation of half-ogre, half-werewolf, Louis Olivier Gamache settled at Ellis Bay in the early 19th century and became known as the Wizard of Anticosti. Gamache used his sinister reputation to protect his property during a time when the fur and liquor trade brought shady characters to an area without law enforcement. Often exaggerated with a boogeyman twist, stories of Gamache abounded in the area. Fishermen swore they had seen him stand in his schooner in a dead calm and call upon the Devil to send him a breeze. Instantly, his sails filled, and he scurried away. Others claimed his clothes smelled of brimstone and that he set false beacons to lure unsuspecting ships ashore so he could salvage their cargo.

In reality, he was not a ship-wrecker, nor was there any need for that, with nature hurling hundreds of ill-fated ships upon Anticostis shores. Gamache did, however, make a tidy living by scooping up what was thrown his way, and while he did promote his fearful reputation, those who knew him, claimed he was a rough but kind man. His lonely life on Anticosti was punctuated with tragedy. His first wife and a child died of smallpox, and later, upon returning from an eight-day inspection of his trap lines, he found his second wife dead and his three children, ages six, four, and two, starving and cold.

Gamache died at the age of seventy, in September 1854, while taking his breakfast, a mug of undiluted navy rum.

Forty years later, there was a new owner of Ellis Bay, and two lights were established to legitimately bring ships into port.

In 1895, Henri Menier, a French sportsman who had made millions in the chocolate industry, purchased Anticosti Island as a private hunting ground. Over the previous ten years, he and his friend, Georges Martin-Zede, had explored the world on Meniers three-masted, 800-ton barque, LaValleda, searching for a sportsmans paradise. When they acquired Anticosti, they decided to not only use it as a hunting ground, but to exploit its resources and create a mini-fiefdom.

Ellis Bay was the only location on the island favorable for a deep-sea port, and under Martin-Zedes leadership, the village of Port Menier was formed on its shores. In 1903 - 1904, a substantial pier, nearly a kilometer long, was extended from Port Menier into waters deep enough for ships to safely harbour and unload their cargo.

To mark the pier and guide ships into port, two pre-fabricated range lights were ordered from the French firm of Sautter & Harle. The pieces arrived in 1905, and the light on the pier was erected that year. Work on the rear light, which was placed atop a stone masonry foundation near Menier's Chateau, began the following July, and the range lights were lit for the first time on August 11, 1906.

Georges Martin-Zede wrote the following regarding the new range lights: "The shorter, [...] would end up at the wharf at Port-Menier, the other [...]near the villa [...]. These two lights would be fixed oil pressure lights and the illuminating areas would not exceed the two headlands at the entrance of the Bay: Cape Henry and Cape Agile. The Canadian government was informed of this improvement that was made for the islands navigation service and was granted franchise rights: they would be considered as settlers and would not have to pay duties."

The 1906 Annual Report of the Department of Marine and Fisheries described them as follows:

The lights were listed as privately owned, but would be exhibited for strangers when information was received of a vessels arrival.

The colony on Anticosti Island was never profitable, and when Menier died in 1915, his heir backed away from the project, and the island was eventually sold in 1926 to the Anticosti Corporation, who maintained the logging operations. Port Menier became a boomtown for a short period, but with the onset of the Great Depression, the towns population fell to about 400, and never again returned to its glory days. Consolidated Paper Corporation gained control of Anticosti Island in 1931 and merged with Bathurst Paper in 1968 to form Consolidated - Bathurst Limited.

Due to modifications to the wharf to improve docking facilities, the cast-iron towers had to be relocated in 1927. The towers were moved to a new alignment at the head of the bay, where the front range light was 500 yards from the shore and the rear tower was another 999 yards inland.

In 1974, the paper corporation sold Anticosti Island to the Canadian government for $23,780,000. The historic range lights were decommissioned some time after 1985 and replaced by a modern set of range lights (front, rear) that remain in operation. When the Menier Chateau site was being improved, local residents also restored the back range light and placed it nearby on a new foundation. With financing from the North Shore Sector of the Ministry of Cultural Affairs of Quebec and local contributions, the rear range tower was lowered from its crumbling base onto a bed of pine boughs during the winter of 1989 and dragged to its new site. During this process, its lantern room was damaged, and it was decided to replace it with the one from the front range light. The rear tower was sandblasted, painted white, and placed atop a new concrete foundation near the Menier Chateau during the summer of 1990, and interpretive panels were installed to share the history of the lighthouse.

The restored rear tower, which has been a privileged witness of port activities for more than a century, is rusted once again, evidence of the harsh weather conditions that have always plagued Anticosti Island. The front tower, which sacrificed its lantern room for the rear tower, remains standing in the woods just off the road to Baie Sainte Claire.

For a larger map of Baie Ellis Range Lighthouse, click the lighthouse in the above map.

From the pier in Port-Menier, drive northeast and take your first left onto Chemin Martin Zédé and then make a quick right on Rue du Vieux Moulin. Take your second left onto Rue des Menier and continue for 1.5 km (0.9 miles). At this point, turn right onto Chemin de la Baie Sainte Claire and then make a quick left onto Chemin du Chateau. You will find Baie Ellis Rear Range Lighthouse just beyond the foundations of Henri Menier's Chateau. The front tower can be see in the woods alongside Chemin de la Baie Sainte Claire.

The lighthouse is owned by Port-Menier. Grounds open, tower closed.


With some time to kill before returning our SEPAQ Ford F-250 to the airport and catching our flight off the island, we drove around Port Menier and happened across this doe and fawn, two of the 166,000 white-tail deer on Anticosti Island. We had heard conflicting reports about the status of the original front range light so we decided to see if we could find any signs of it. We finally concluded that this rusted metal tower, which is located on the ground near the foundations of the Menier Chateau, seems to be about the right size and has the features to be the remains of the front tower. We thought of asking in the local tourist information centre if they knew anything about the old front range light but figured our very limited French would likely prevent an intelligible conversation on that topic.

After returning home, I contacted the visitor information centre in Port Menier with the help of a French-speaking friend. Turns out what I had thought might have been the front range tower is just an old support column for the chateau! That explains why it was filled with cement! The lady at the centre told me that the front tower is still standing and was kind enough to send me this photograph of it. I looked at several Light Lists and determined that both of the original range towers were moved into the woods at the head of the bay in 1927, when improvements were made to the pier. The towers apparently served in that location until being replaced by the modern range lights. The front range tower now stands, without its lantern room, in the woods just off the road to Baie Sainte Claire. It is apparently not far form the modern rear tower. How we missed seeing it when we drove out to West Point is beyond me.