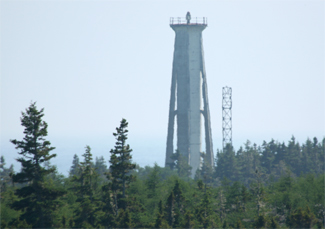 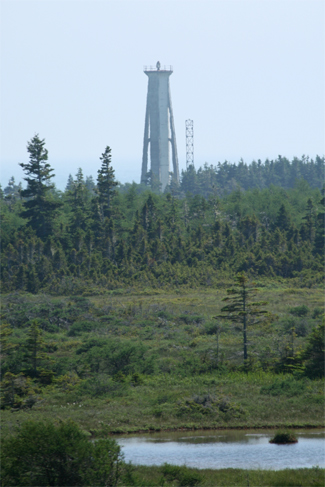 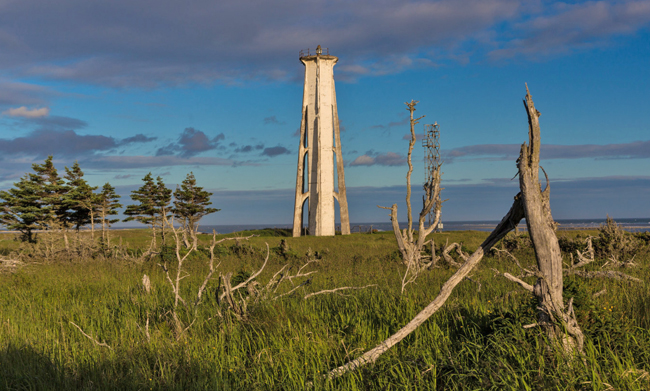 The July 26, 1890 edition of the Quebec Saturday Budget reported on yet another shipwreck along the Anticosti Coast: the steamer Idaho, carrying a load of cheese and produce.

A dispatch received at our office last Wednesday from South Point, Anticosti, through the Signal Service Bureau says, A two masted steamer is ashore a little above the lighthouse and asks for assistance. The keeper has gone aboard. Particulars as soon as possible.

Jacques Cartier first sighted Anticosti Island in July, 1534, near South Point. He wrote, The whole of the coast is flat and the most bare timber we have seen, with beautiful fields and meadows marvelously green. Unfortunately, the beautiful fields and meadows were actually a peat bog about twelve to fifteen feet above the level of the sea. And the bare timber, a thick and impenetrable forest of dwarf spruce trees, their branches so twisted and knotted together, that it was said a man could walk across their tops.

During foggy periods, mists arise from the swampy peat bogs, making them appear like the surrounding sea and catching many mariners who followed Cartier by surprise.

One of the most devastating shipwrecks occurred the morning of November 14, 1736, when the Renommee grounded on a reef a mile from South Point. All fifty-four people made it to shore with enough supplies to last five weeks. Thirty men took the ships two small boats and set off for Mingan to get help, while the others set up camp and waited for their return. The smaller of the boats was lost in a snowstorm shortly after leaving and was never seen again. The other inched along the south Anticosti shore, and on May 1, 1737, with only three men surviving, reached Mingan. A French rescue party was sent to South Point a few days later, where they found only three survivors who had stayed alive by boiling and eating the leather boots and britches of their twenty-one dead comrades.

While the government could not change the currents, reefs, and fogs of Anticosti Island, they did establish navigational aids and provision caches on the island during the Imperial years. The lighthouses built during this period at Heath Point, Southwest Point, and West Point were constructed of limestone quarried on the island.

By the 1870s, with the increase in marine traffic and the continuation of shipwrecks, it was clear that another lighthouse on Anticosti Island was needed. The 1870 Annual Report of the Department of Marine and Fisheries stated:

Contracts were made by this Department for the erection of a lighthouse and powerful steam fog whistle, on the south point of the Island of Anticosti, in the Gulf of St. Lawrence. It is expected that both the light (which will be a flash), and the fog whistle at this station, will be in operation early next summer. The importance of this light and fog whistle to vessels proceeding up to the St. Lawrence, or going to sea during thick or foggy weather, is well known to everyone acquainted with the locality.

This time the lighthouse, a hexagonal building, was constructed of wood and painted white, with a red roof - a red vertical stripe was added to the seaward face in 1881. The catoptric light, which shone for the first time on August 15, 1870, had two lamps and twenty-inch reflectors in each of its six faces and revolved to produce a white flash every twenty seconds. With a focal plane of seventy-five feet above the high water mark, it could be seen from up to eighteen miles. A steam fog whistle was built about 300 feet east of the light and sounded a ten-second blast in each minute during fog and snowstorms. Daley, Carter, and Doolan constructed the lighthouse, and E. Chanteloup provided the lantern and lighting apparatus. The total cost for the lighthouse was $7,492.50, while $7,242.22 was spent on the fog alarm.

The station also had two dwellings, one for the keeper and one for his assistant, a stable, and a provision depot, which was relocated from Shallop Creek when the station opened.

The first keeper, David H. Tetu, was fond of adventure and regarded as one of the most intelligent and ingenious lighthouse keepers of the time. In 1878, J. U. Greroary, the Marine Agent in Quebec, asked Tetu to draw a map of Anticosti Island showing the shipwrecks during Tetus tenure. That map, which still exists today, shows eighty-seven wrecks that occurred between 1870 and 1879. One of these was the barque Renfrewswhire, which wrecked at South Point on October 27, 1873. The master of the vessel and eight men stayed at the lighthouse the entire winter and were fed using provisions from the depot. During the winter of 1878, Keeper Tetu gave some of the provisions from the depot to islanders, who were in a state of starvation.

David Tetu, who received a five-year patent in 1878 for a mode and apparatus for drying fish, was an inventor, zoologist, mechanic, shoemaker, mapmaker, hunter, trapper, cook, and Federal Receiver of Wrecks of Anticosti. Faucher de Saint-Maurice, a Catholic priest who visited Tetu, described him as a marvelous type of French Canadian of yesteryear, civilized, adventurous, energetic and well-educated . . . . The walls of his home were hung with hunting trophies, guns, fishing tackle. In one corner was a medicine chest saved from the wreck of the Shandon and there is a small library where Cornhill Magazine and a treatise on entomology rubbed shoulders with lAlmanache de Rapsail and lImitation de Jesus-Christ.

Life at the isolated station was hard work. Horses and pigs seemed to thrive there, but not cows. Once on the island, they seldom lived past eighteen months. It was supposed there was some sort of weed that affected the cattle. Because of this, the stock of cows for the lightkeepers was renewed every two years. After the cattle were butchered, their hides were sent to Quebec tanners and then returned to the station the next season to be made into shoes for the keepers' family.

By the twentieth century, the wooden lighthouse had been battered and worn by the merciless Anticosti winters. A new tower was built in 1912, with a flying buttress design by Colonel William P. Anderson. The white tower is constructed of reinforced concrete, with the central hexagonal tower supported by six flying buttresses, attached to the tower in two places on the way up, and then flared out to support the red lantern. The buttresses braced the tower against the horizontal wind load common in the area. This same design can be found at Point au Pere, Quebec, and Caribou Island, Lake Superior, Ontario. The old dwellings were also demolished in 1912 and replaced by a duplex with gingerbread trim.

Pointe du Sud Lighthouse was automated in 1963, and then decommissioned in 1980, when its lantern room was removed and the light was relocated to a nearby fifteen meter (fifty foot) skeletal tower. The skeletal tower has a focal plane of 19.5 meters (sixty-four feet) and exhibits a white flash every six seconds. The keepers duplex was demolished in 1980, and now the only remaining historical structure is the decapitated tower, which is slowly succumbing to the harsh elements. The lighthouse was declared a Recognized Federal Heritage Building in 1991.

Surrounded by excellent salmon rivers, prime lobster fishing grounds, and fine goose and deer hunting, South Point might be considered a paradise . . . for a loner, as except for the abandoned cemetery, there is not a soul around. The solitude and barren landscape of South Point testify of the hardships encountered and the much-needed help rendered at this isolated outpost.

For a larger map of Escarpement Bagot (South Point) Lighthouse, click the lighthouse in the above map.

Escarpement Bagot Lighthouse is best seen by boat, but a distant view is possible by turning south off of Anticosti Island's main road at kilometre 211. Follow this road for 24.5 kilometres, passing Safari Anticosti Outfitters' Bell River Lodge until you arrive at their landing strip. Drive straight across the landing strip, continue for a short distance, and then follow a road to your right, from which you can get a distant view of the lighthouse. Hiking to the lighthouse from this road is not recommended as the ground is marshy, and it is easy to get lost in the dense growth.


I definitely wanted to attempt a hike to South Point, but swarming flies and a short excursion into the dense and marshy forest quickly convinced me that it wasn't a good idea. We saw hundreds of deer as we drove around Anticosti Island. They would typically stare us down for a few seconds, and then turn tail and run off into the forest. How they navigate the almost impenetrable forest at such a high rate of speed is beyond me. I asked one of the workers at the cabins where we stayed how the hunters managed to find the deer as there are very few open spaces. He replied that the hunters typically just drive around on the roads or hang out in a roadside blind as the roads are some of the most open spots on the island.