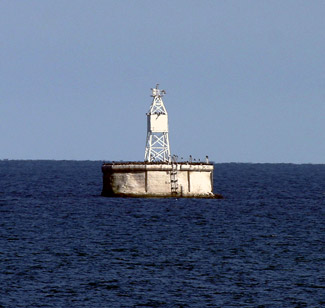 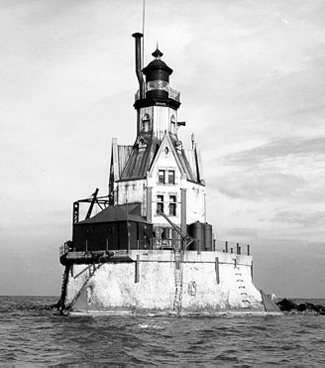 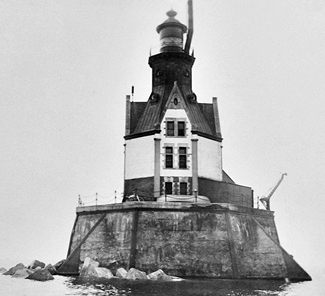 Situated nearly two miles offshore from the entrance to Racine Harbor, Racine Reef has always been a menace to mariners sailing between Milwaukee and Chicago. A buoy was placed on the reef in 1863, and in 1868 the reef was surveyed to ascertain the practicability and necessity of constructing a light-house and breakwater on it. The survey noted that a season rarely passes without vessels running upon the reef and estimated that a lighthouse could be built for $175,000. The engineer in charge felt that this large outlay, coupled with the subsequent annual expenditure to maintain the lighthouse, could not be justified. Instead, he proposed that range lights be established at Racine and a light at Wind Point to warn mariners at night and a large can buoy be anchored on the reef to warn off vessels during the day. A first-class iron can buoy, painted red, was placed on the reef in 1869, and in 1872 a pierhead light was established at Racine to range with Racine Harbor Lighthouse. Wind Point Lighthouse commenced operation in 1880, with a red light being shown from a window in its watchroom to mark Racine Reef. These various aids proved insufficient at marking the reef, and in 1898, a forty-foot square crib, with a height of just over nine feet, was towed to the reef, sunk, and filled to the water level. Brick walls with concrete coping were built up to the deck level, and the center was paved. A metal tower, equipped with three gas tanks for a beacon light, was constructed on the crib during the summer of 1899. The tanks were charged with gas on August 31 of that year, and the light was exhibited for the first time that night. The tower was raised twenty feet in 1901 by the addition of a pyramidal skeletal frame atop the original metal tower, but the gas light was still considered very unsatisfactory due not only to its poor illuminating power but also to the difficulty of reaching it in the winter to recharge the tanks.

The Lighthouse Board described the difficulty of maintaining the light in its 1902 annual report:

Racine Reef is a dangerous stretch of solid rock extending in a northeasterly and southwesterly direction about 5,000 feet, the shallowest spot of which is approximately in its center, and is distant 1 7/8 miles from the main light at Racine. It lies in the track of vessels running between Milwaukee and Chicago. As the route is kept open all the winter, it is necessary that a light should be maintained there without interruption.

The Light-House Board has tried to light this reef economically by establishing on it tentatively a gas beacon. This lighted beacon did not prove to be as efficient as was expected, as it was frequently extinguished by the heavy winter waves, when in each case the beacon became unserviceable until it was repaired. The light-house tender Dahlia, which draws about 10 feet of water, can not approach nearer than 900 feet to the beacon, and this only in calm weather. The charging of the beacon tanks with compressed gas from this distance is difficult, and it is also injurious to the tender's pumping machinery. It becomes impossible during stormy weather to reach the beacon, even in a small boat. The Board at such times has been compelled to temporarily discontinue the light.

The light atop Racine Reef was not burning one night in December 1900, when the steam barge George Dunbar, laden with 275,00 feet of hemlock lumber, was passing Racine en route from Empire, Michigan to Chicago. During a blinding snowstorm, the barge ran aground on Racine Reef around midnight. The crew spent all night jettisoning 90,000 feet of lumber from the decks of the barge in an attempt to free the vessel from the reef. At daylight, residents at Racine spied the wreck, and a volunteer lifesaving crew was formed and taken to the reef aboard the fishing tug Emma Bloecher. The George Dunbar was soon freed from the reef, and though leaky, managed to steam into the harbor at Racine.

During its session on October 7, 1901, the Lighthouse Board concluded that a light tower, fog signal, and keepers quarters were needed on Racine Reef. On March 3, 1903, Congress appropriated $75,000 for the project, and after plans were prepared, bids were solicited for constructing the crib foundation, a concrete pier, the light tower and dwelling, and for providing the needed structural steel and cast-iron work.

Some citizens of Racine were not happy with the plan for a fog signal on Racine Reef. According to a newspaper story dated April 5, 1903: Daily do visitors call at the Hotel Racine, where Congressman [H.A.] Cooper and his wife are guests, and ask for interviews with the member from the first congressional district. Each and every one demands that Congressman Cooper work against the appropriation for the building of a lighthouse and the placing of a steam foghorn there. These people all claim that the placing of a foghorn on Racine Reef will be a nuisance and in foggy weather none will be able to enjoy a nights rest.

Despite the complaints of residents, the Chicago & Great Lakes Company soon sank a sixty-foot-square crib with a depth of fourteen-and-a-half feet on the easterly point of Racine Reef and filled it with ballast stone. An octagonal concrete pier, was then constructed atop the crib, and 2,000 tons of riprap protection were put in place around the exposed sides of the crib. This work was completed in October 1905, allowing the erection of the lighthouse to begin.

Known as the Belle City, Racine has many beautiful Victorian buildings, and it is fitting that Racine Reef received a castle-like structure that mirrored some of the architecture found in the city. The steel frame of the octagonal lighthouse, inscribed in a circle with a diameter of twenty-eight-and-a-half feet, was assembled during November, and then brickwork was used to complete the bottom two stories and the four gables found on the third story. Brown brick was used on the lower portion of the lighthouse, with white brick being employed in the upper portion and the four gables. The roof of the dwelling and the octagonal tower portion of the lighthouse were covered in copper, while the cast-iron gallery and cylindrical lantern room were painted black.

Seven rooms for the keepers were located on the first and second floors, including a bath and large storeroom on the second floor. A fourth-order, Barbier and Benard Fresnel lens was mounted in the lantern room. The lens has four flash panels and revolved to produce a red flash every five seconds. A twenty-four by sixteen-foot fog signal building was embedded in the concrete pier and originally housed two steam boilers, manufactured by Kingsford Foundry & Machine Works of Oswego, New York, that powered a ten-inch whistle located on the east gable of the lighthouse. The fog signal would sound a five-second blast every thirty seconds. A well sunk under the floor of the fog signal room provided water for the boilers and keepers.

Racine Reef Lighthouse and its fog signal went into service on October 6, 1906, with George Cornell serving as the head keeper, Marion L. Brown as the first assistant keeper, and Conrad A. Stram as the second assistant keeper. On that same date, the nearby Pintsch gas light was discontinued, though the red sector light atop Wind Point Lighthouse remained lit through January 24, 1907.

Assistant Keeper Edward Skilling was feared dead after he failed to reach Racine Reef Lighthouse after setting off for the lighthouse in a storm in early December 1908. These fears were allayed when Skilling telephoned Racine from Chicago, relating that after being on the lake in a naptha launch for four hours in forty mile per hour winds he was finally picked up by the steamer Kalkaskia. Though he nearly froze to death that day, he soon returned to Racine Reef and served at the lighthouse until 1910.

During the winter of 1911-1912, the water surrounding the lighthouse froze solid, allowing the keepers to walk the two miles to shore. In early March 1912, two steamers became stranded in the frozen waters near Racine Reef Lighthouse, and around 500 curious residents trekked out to the lighthouse to view them. The spectacle ended on March 7, when dynamite was used to free the steamers.

A violent storm on February 1, 1915 sent towering waves crashing against the lighthouse. The entire structure trembled with each thundering blow to the extent that furniture walked across the rooms and books and other items on shelves were thrown to the floor. Rooms on the north and east sides of the lighthouse were flooded, and a coating of ice, estimated by Keeper Edward W. Knudsen to be eight inches thick, encased the lighthouse and threatened to entomb the keepers. This picture shows ice conditions at the lighthouse in 1940.

Early the following summer, 1,365 tons of heavy riprap were placed around the towers pier creating a rough surface that would break up the sea before it struck the tower. This action succeeded in reducing the vibration of the tower and in keeping it relatively free from ice.

An air diaphone fog signal replaced the steam fog signal at Racine Reef in 1925, the same year that the light was electrified.

In 1933, 18,000 feet of telephone and control cables were laid by the tender Hyacinth between Racine Reef Lighthouse and the breakwater light at Racine Harbor to consolidate the two stations.

Assistant Keepers Plumer Layman and Marvin Cornell were taking their rotation at Racine Reef Lighthouse in February 1936, when weather conditions prevented the regular supply run from reaching them. The keepers were given supplies to last them a week, but after seventeen days at the lighthouse, they were out of lard, butter, and coffee. Head Keeper Charlie Tesnow and five men from the Coast Guard station in Racine decided to risk a supply run to the lighthouse. Provisions to last more than two weeks were placed in a small wooden boat, and the men, tethered together like Alpine climbers in case any of them feel through the ice, pushed and pulled the boat toward the lighthouse. When the ice became too rough, the men were forced to shoulder the supplies and trudge on for another mile. Tesnow relieved Cornell at the lighthouse, and the other men braved the blowing snow and biting wind to return to shore.

Racine Reef Lighthouse was automated in 1954, and after a few years of neglect, the Coast Guard announced its plans to demolish the structure. The tugboat Racine, with a wrecking barge in tow, arrived at Racine Reef in the summer of 1961 and over a two-month period demolished the picturesque lighthouse. The Fresnel lens was removed from the tower and is now on display at the Racine Heritage Museum.

An automated skeletal metal tower was placed atop the pier at Racine Reef after the lighthouse was torn down. In 2001, the Coast Guard made repairs to the pier, which had started to list. The tower was removed from the pier to be sandblasted and repainted in Milwaukee. A temporary light, with a focal plane of twenty-one feet instead of fifty-one feet, was used until the tower was returned to the pier.

For a larger map of Racine Reef Lighthouse, click the lighthouse in the above map.

The light is best seen by boat, but a distant view is possible from Racine Harbor. The lens from Racine Reef Lighthouse is on display at Racine Heritage Museum.