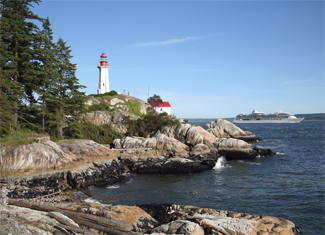 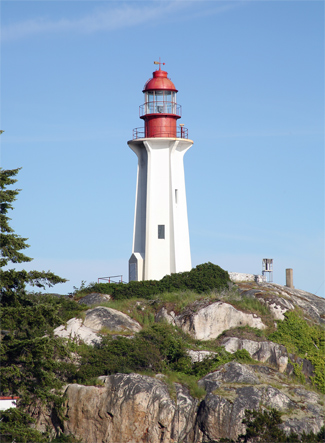 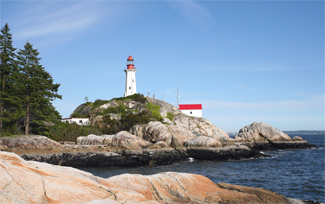 Perched atop a rocky bluff, Point Atkinson Lighthouse winks its watchful eye letting cruise ships and mariners know they have left the city and are finally now at sea.

Point Atkinson was named by Captain Vancouver, for a particular friend on July 4, 1792, when Vancouver sailed past the rocky peninsula aboard the Discoverys yawl. Today, Lighthouse Park encompasses the point at the entrance of Burrard Inlet and sixty-five hectare (185 acres) of virgin forest, which were set aside in 1881 to serve as a dark backdrop to the lighthouse.

Vancouvers first lighthouse was built there in the spring of 1874 by Arthur Finney of Nanaimo with a budget of 4,250 CAD. The lighthouse would have gone into service that year, but Stone-Chance of Birmingham sent the wrong light, and it took almost a year to receive a replacement. Edwin Woodward lit the light for the first time on March 17, 1875. The original lighthouse was a wooden tower with attached keepers dwelling, and its beacon, shone from a height of ninety-five feet above sea, was visible for fourteen miles.

The isolation was too much for Ann Woodward, and five years later, after having given birth to her third child and West Vancouvers first white child, the family moved to a farm in Ontario. The second keeper, R.G. Wellwood stayed less than a year.

The third keeper, Walter Erwin came to the station in 1880 and stayed a bit longer, three decades. Erwin, one of the original homesteaders of West Vancouver, owned a large tract of land near the lighthouse, now an affluent neighbourhood known as Cypress Park.

When fog shrouded Point Atkinson, ship captains would sound three rapid blasts of their ships horn, prompting the lightkeeper to pump away at a hand horn until the ship signaled it was okay to stop. This changed in 1889, when Canadian Pacific Steamships requested that a fog alarm be added to the station at Point Atkinson. This greatly increased the keepers workload, as the foghorn, located in a structure west of the lighthouse, now had to operate any time there was fog or smoke within four miles of the station. In 1896, Erwin logged 1450 hours manning the signal. The first horn, a Scotch Horn, was a steam pressure affair which spun a rotating drum, similar in design to a kazoo. In 1902, this horn was replaced by a diaphone fog alarm.

Erwin was given a raise of $300 to hire an assistant to help run the fog signal, but the cheapest help he could find cost $600 a year, so Erwins salary of just $700 was nearly cut in half.

In 1905, Erwin, who suffered from arthritis, a common malady of lighthouse keepers, fell down the tower ladder, injuring his leg. His doctor recommended a soak in Harrison Hot Springs, but when this didnt provide relief, specialists removed a portion of diseased bone from his leg. Forced to hire a second assistant to run the station during his fourteen-month recovery, Erwin found himself greatly in debt. He appealed to his superiors for financial assistance, feeling it was merited due to his twenty-six years of service and the fact that the injury occurred on the job. His plea was rejected as the Department of Marine and Fisheries feared setting precedence, and Erwin finally resigned in 1909, after hobbling about his duties for a few more years. In 1911, the mayor of Vancouver awarded Erwin the Imperial Service Medal on behalf of King George V in a ceremony help on the steps of City Hall.

Thomas Grafton, who had served for twenty-one years as Erwins assistant, succeeded him as keeper on April 1, 1910. During his tenure, the entire station was transformed. A new hexagonal tower, ringed with six rib-like buttresses and designed by Colonel William Anderson, was erected in 1912, along with a new keepers duplex and a fog alarm building, which housed internal combustion engines, air compressors, and diaphones. The tower, still in operation today, is 18 m (60 ft) tall with a focal plane of 33 m (108 ft), and has a signature of two white flashes every five seconds. The 1912 lighthouse was originally equipped with a third-order Fresnel lens.

Grafton loved to fish the area, and one of his secret weapons for collecting bait fish was dynamite. After setting off an explosion, he would row over and scoop up the startled herring. The log for October 6, 1933, written by his son Lawrence reads:

started calm with light haze in bay. Pt Grey showing all morning dimly. Lightkeeper was killed instantly sometime before 6:00 a.m. from a dynamite blast which exploded accidently in his hand. The body was recovered at 7:15 a.m. by his younger son, drifting in the submerged boat about 200 yards off the point. Light W. wind during the day. Then calm with light fog drifting out of bay from 9:30 p.m. till midnight. S. shore lights in sight till midnight. Partly cloudy.

Lawrence applied to replace his father, having assisted at the station for many years, but instead the position was awarded to Ernie Dawe, a keeper at Ballenas Island.

1935 brought new technology to the station, when on September 28th a radio beacon was installed. Vessels with receivers could now pick up the signal from Point Atkinson beyond the range of its lights and horns.

Change also came to Lighthouse Park during World War II, when searchlights and gun emplacements were installed at Point Atkinson, Stanley Park, Narrows North and Point Grey. A road was cleared to the point, greatly improving access to the outside world for the keepers, and eighty conscripts (drafted soldiers), known as McKenzies Commandos, were housed in a cedar bunkhouse in the forest behind Point Atkinson. Today, the bunkhouse is known as the Skiwitsu House, which is available for community use, and a former dining hall serves as the Phyl Munday Nature House.

The only time during the war that Point Atkinson came under fire was when an instructor at Narrows North accidentally fired a twelve pound shell past the lighthouse.

In 1980, Gerald Watson was made principal keeper and Donald Graham assistant keeper. Graham, a graduate of the University of Saskatchewan with a masters degree in history, had moved his family to Victoria, British Columbia on the first leg of a journey to join an agricultural co-operative in Belize. While in Victoria, he answered an ad for a lightkeeper job and remained in British Columbia. His assignments included assisting at Point Atkinson, then Lucy Island and Bonilla Island. He was transferred back to Point Atkinson in 1980 and remained as keeper until 1996, when the station was automated. He and his wife stayed on at Lighthouse Park as groundskeepers.

During his time at Point Atkinson, he wrote two books, Keepers of the Light (1985) and Lights of the Inside Passage (1986) chronicling the British Columbia lighthouses and the lives of their keepers. The lighthouse community is deeply indebted to him for his substantial work. Mr. Graham passed away on October 8, 2003 of pancreatic cancer. His wife, Elaine, continued to live at the lighthouse until 2020, serving as head of the West Vancouver Historical Societys Point Atkinson Light Station subcommittee and as caretaker of the park and lighthouse. In these roles, she worked diligently to restore the structures at the station. Click here to see the societys website on the lighthouse.

Point Atkinson was designated a National Historic Site in 1994. This virtual museum contains a lot of interesting Point Atkinson photographs and stories.

Located in Lighthouse Park in West Vancouver, where it marks the north side of the entrance to Vancouver Harbour.
Latitude: 49.33038, Longitude: -123.26453

For a larger map of Point Atkinson Lighthouse, click the lighthouse in the above map.

From the northern end of Lion's Gate Bridge, take Marine Drive west for 11.1 km (6.9 miles), and then turn left onto Beacon Lane where a parking area for Lighthouse Park is available. Note that the trail between the parking lot and Point Atkinson Lighthouse is quite steep. Lighthouse Park is open daily from 6 a.m. to 10:30 p.m.

The third-order Fresnel lens used in the lighthouse is still located at the station, but tours of the facilities have not been offered for many years.


When you arrive at Lighthouse Park, be sure and pick up an informational brochure at the kiosk or trailhead as it provides you a good map for the many trails in the park. To reach the lighthouse, walk down the paved road (Beacon Lane Trail) until it ends. When we were there in 2009, there was a sign near the gate across the driveway to the keeper's dwelling that said visitors were welcome to walk down the driveway when the gate is open. If you do so, you can get this view of the lighthouse. If you go back up the hill a short distance, and then go west, you will reach Lighthouse Viewpoint, where there is a stone monument that lists the keepers of the Point Atkinson Lighthouse and from where you can get this view of the lighthouse. Continuing west from Lighthouse Viewpoint for 400 feet, you can take West Beach Trail, which leads down to the shore and gives you what I believe are the best views of the lighthouse. It is best to be at West Beach in the late afternoon and evening.

For a great view of Vancouver, it is also fun to hike over to East Beach.

In the 2005 version of the movie "The Fog," Point Atkinson Lighthouse is supposedly home to Antonio Island's radio station KAB. Stevie Wayne broadcasts music and weather reports from a lantern room, and this circular studio even has a portion of a Fresnel lens. A brief view of Point Atkinson Lighthouse can also be seen at the beginning of the movie "Double Jeopardy," though the lighthouse plays no role in that film.