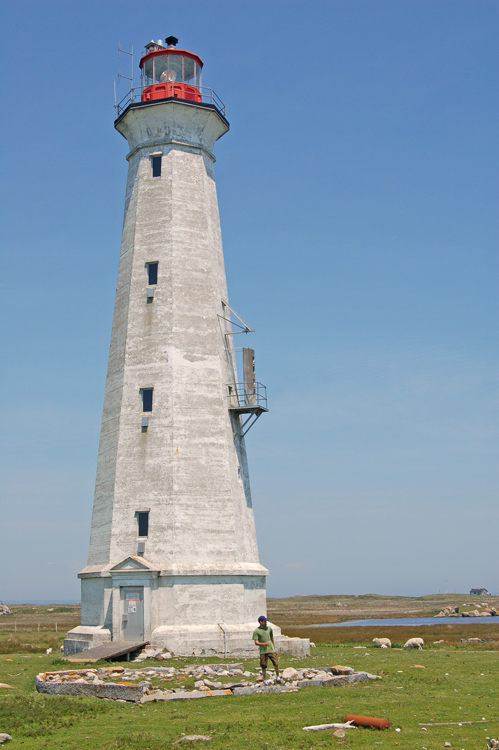 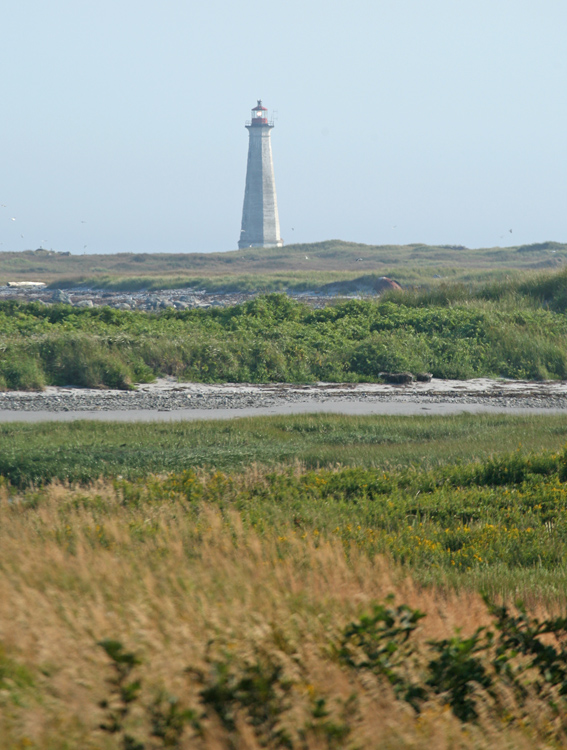 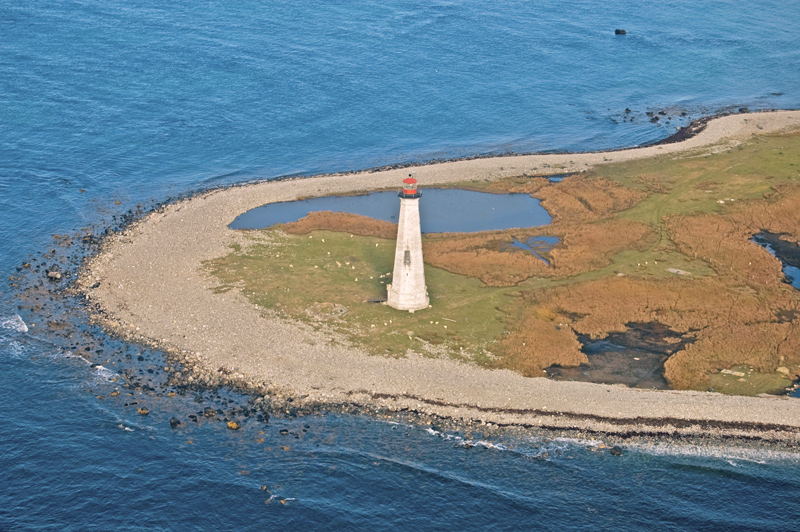 With a height of 101 feet, Cape Sable Lighthouse is the tallest lighthouse in Nova Scotia and helps mark the southern tip of the province. Low-lying Cape Sable is a sandy islet separated from the much larger Cape Sable Island by Hawk Inlet and is the turning point for vessels headed to the Bay of Fundy from the east. The Mikmaq name for the island was Kespoogwitik, meaning where the land ends. Early explorers and French colonists called the island Cap de Sable (Sandy Cape), and this name was Anglicized to Cape Sable.

The current lighthouse is not the first one built on Cape Sable. The lighthouse committee in the House of Assembly of Nova Scotia proposed a lighthouse for the cape in 1841, but only if New Brunswick was willing to help pay for its construction and maintenance. Funds for a lighthouse on either Cape Sable or Baccaro Point, which define, respectively, the western and eastern limits of Barrington Bary, were finally granted in 1850, and a lighthouse ended up being built on Baccaro Point later that year.

A petition for a lighthouse to mark the western entrance to Barrington Bay was read in the House of Assembly in 1856. Other petitions followed in subsequent years, but it was the wreck of S.S. Hungarian on the cape in 1860 that finally prompted the House of Assembly to act. The iron-hulled passenger steamer Hungarian made her maiden transatlantic voyage in 1859, and on February 8, 1860, the ship left Liverpool bound for Portland, Maine under the command of Captain Thomas Jones. Captain Jones was apparently searching for a glimpse of Cape Sable Island, when his vessel struck the cape on the night of February 19.

Residents of Cape Sable Island noticed flares around three oclock in the morning, and at daybreak, they could see people clinging to Hungarians masts. Heavy seas made it impossible for aid to be rendered, and all people could do was stand helplessly as debris started to wash ashore. All 205 people aboard were lost. One of the personal belongings recovered was, according to legend, a diary whose last entry, Lizzie dies tonight, became a popular ballad.

On July 9, 1860, Joseph Howe, Provincial Secretary of Nova Scotia, in a letter to the government of New Brunswick, wrote, The disastrous fate of the steamship Hungarian has called attention to the imperative necessity of building a first-class light house on Cape Sable. Howe invited the province to contribute to the building of the lighthouse, but it appears New Brunswick declined, forcing Nova Scotia to fund the lighthouse on its own. Cape Sable Lighthouse was erected during the summer of 1861 and placed in operation on November 12 of that year, showing a fixed red light produced by nineteen lamps, set in reflectors.

Mariners were not pleased with the power of the red light, and in an 1863 report on the provinces lighthouse, John H. Kendrick wrote: This Light, which is by far the most expensive on the coast, is a very poor one and not to be depended upon. Kendrick suggested that the light would be more powerful if the chimneys in the lamps were red instead of the lantern room glass. The red glass in the lantern room was thought to reduce the power of the light by four-sevenths. The following year, Kendrick proposed that instead of one red light on the cape, a second lighthouse of the same height should be built so that two white lights could be shown. The loss of three vessels in the last three months of 1864 evidenced the need for a first-order light for Cape Sable.

In 1869, ruby red chimneys were placed in the lamps at Cape Sable, and clear glass was placed in the lantern room. This change allowed the light to be seen four to five miles farther, but mariners still wanted a more powerful light for Cape Sable. Starting on September 1, 1870, a flashing white light was exhibited at Cape Sable Lighthouse, and nearby Baccaro Lighthouse was changed to a fixed red light.

Harvey Doane, the first keeper of the lighthouse, passed away in 1871, and Isaac K. Doane, his son, was appointed keeper in his stead. Isaac Doane looked after Cape Sable Light for thirty-one years, the longest term of any of the stations keepers. During Isaac Doanes service, a fog alarm was established on the cape in 1876, and the present concrete tower was constructed in 1924. The fog whistle, which cost $10,039, was located near the lighthouse and gave a ten-second blast each minute in thick weather. A third-order Frensel lens, which produced a white flash every five seconds, was placed in operation in the Cape Sable Lighthouse on November 1, 1902, and the illuminating apparatus formerly used at Cape Sable was installed in Baccaro Point Lighthouse.

Boone & McDonald of St. John erected the octagonal, reinforced-concrete tower under a $10,800 contract. The eighty-six-foot tower was capped by a ten-foot, cast-iron lantern room and activated on September 4, 1924. After the new lighthouse was finished, the lantern room was removed from the old one, and a roof was put on the wooden tower to create a storage barn.

Benjamin F. Smith served as keeper of the lighthouse from 1931 to 1945 and then again from 1952 to 1970. Gerald and Sid, Keeper Smiths two sons, were thirteen and eleven respectively when an unforgettable event happened at the station on July 26, 1942. Early the previous day, the schooner Lucille M out of Lockeport, Nova Scotia encountered the German submarine U-89 approximately eighty nautical miles due south of Cape Sable. Without warning, the submarine fired twenty incendiary and fifteen high-explosive rounds at the schooner. Captain Percy Richardson and his ten crewmembers, four of whom were injured in the shelling, managed to escape in two dories before the Lucille M went down.

On a Sunday afternoon, Gerald spotted two dots on the horizon. As the dots slowly grew larger, the boys could finally tell they were two boats being rowed towards them. Keeper Smith put his .32 calibre pistol in his back pocket and started toward the beach when the visitors were getting close to shore. Gerald tried to follow his dad, but was promptly told to go to the house. The boys followed the action from the front hall, with the window up and binoculars resting on the sill.

Keeper Smith asked the men who they were and what their purpose was, and they told him they had been rowing for some thirty hours after Germans had sunk their schooner. The boys recall that the schooners overweight cook was near exhaustion, and the others had to help him walk to the keepers cottage.

Lottie Smith prepared a quick meal for the famished men, and before they ate, Captain Richardson said, Take You hats off, boys. Were going to pray. What followed was a one-sentence prayer of gratitude: Dear God, thank you for getting us here safely. Keeper Smith called his brother-in-law, and he motored out to pick up the men and tow their dories to Clarks Harbour.

Cape Sable Lighthouse lost its last keepers on May 26, 1986, and all structures save the concrete tower have since been removed or destroyed. A community group removed the two-storey wooden tower from the island with the intention to use it as part of a waterfront development project in Yarmouth, but the plan never materialized.

Eastern Infrastructure Inc. of Elmsdale spent six weeks, during the fall of 2013, washing, patching, priming, and applying an elastomeric coating to Cape Sable Lighthouse. The project was funded by Friends of the Cape Sable Lighthouse, who raised more than $90,000 for the work, including a $50,000 contribution from the province. Paint was donated by Wilsons Home Hardware of Barrington Passage. Eastern Infrastructure has also painted the lighthouses at Cape Forchu in Nova Scotia and Cape Ray in Newfoundland. Fisheries and Oceans carried out a restoration of the lighthouse in late 2016 and early 2017 that included repairing the concrete, rehabilitating the lantern room, installing a heating system, and repainting the lighthouse.

In 2018, boxes containing the Fresnel lens from Cape Sable Lighthouse were rediscovered in a Coast Guard building on the waterfront in Saint John, New Brunswick that was being prepared for demolition. The clockwork mechanism and fog horn trumpet from Cape Sable were also found in storage along with the lens. The Nova Scotia Lighthouse Preservation Society took the lens to the Maritime Museum of the Atlantic in Halifax for restoration. Friends of the Cape Sable Lighthouse have planned for the construction of a lantern room atop a concrete base to hold the restored lens. This display will be located at the end of Fish Plant Road on Cape Sable Island from where visitors can look out across Hawk Inlet for a distant view of Cape Sable Lighthouse.

For a larger map of Cape Sable Lighthouse, click the lighthouse in the above map.

The best views of Cape Sable Lighthouse come from the water, but a distant view from land can be had by following these directions: From Route 3, just west of Barrington Passage, turn south onto NS-330. In Centreville, after 5.8 km (3.6 miles) on NS-330, turn right onto Centreville South Side Road, continue 5.9 km (3.7 miles), and then turn left onto Hawk Point Road. Cape Sable Lighthouse can be seen from the end of Hawk Point Road.