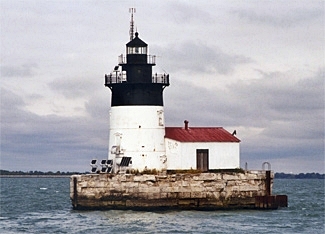 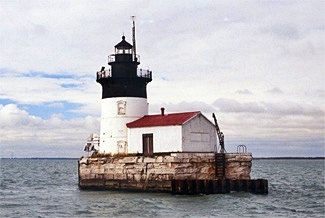 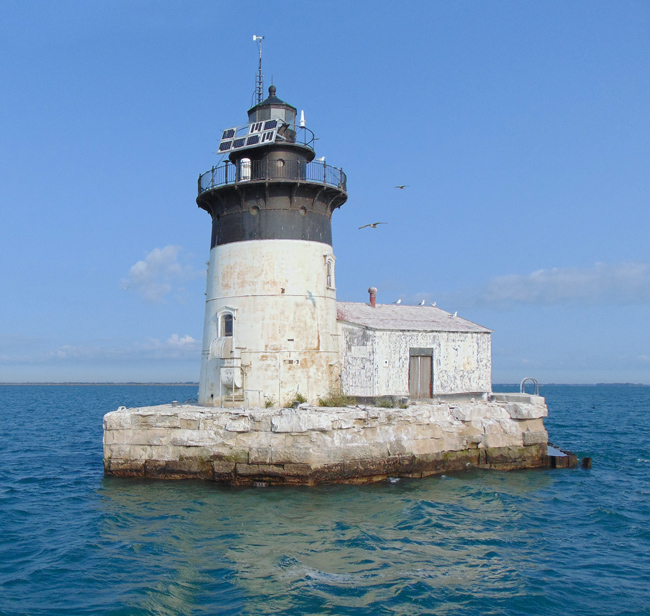 In 1873, the Lighthouse Board noted that a string of casualties, including several the previous fall, had occurred from vessels running aground on Bar Point, a dangerous shoal jutting out from the Canadian shore into the northwest corner of Lake Erie. The Board gave the following explanation of how the groundings happened:

Vessels entering and leaving river Detroit, notwithstanding the aid of Bois Blanc (Canadian) and Gibraltar (American) lights, have no definite guide as to when to change their course to their destination on Lake Erie, or vice versa in going into the river Detroit. Hence many vessels, especially in heavy weather, turning too soon, come to grief on Bar Point Shoal.

As the losses suffered each year would more than pay for the establishment and maintenance of a lighthouse, the Board recommended a beacon light be placed off Point Mouille in twenty-four feet of water so that captains would know that by rounding it, they could safely set their course to or from the Detroit River. Congress appropriated an initial $20,000 for a lighthouse and steam fog signal at the mouth of the Detroit River on August 7, 1882 and followed this up with a $40,000 appropriation on March 3, 1883 and an $8,000 appropriation on March 3, 1885. Canada had maintained a lightship on Bar Point since 1875, but the Lighthouse Board felt a permanent structure was still warranted as the lightship was hard to distinguish from nearby vessels. Test borings were made in November 1882 to determine the type of foundation needed, and the necessary material was obtained by contract so work could began in the spring of 1884. The governor of Michigan conveyed title to the submarine site on May 8, 1884.

With permission from Canada, a water-tight crib was constructed at a wharf in Amherstburg, Ontario using twelve-inch-square timbers in the form of an irregular hexagon, ninety feet in length and forty-four-and-a-half feet in width. During the construction, a carpenter was killed when he made a misstep and fell, striking the bottom of the crib. After being partially filled with cement, the crib was towed out to Bar Point, where it was sunk on July 3, 1884 with the triangular portions of the crib pointing north and south. Red warning lights were then mounted on the crib to warn mariners of its presence.

By September, the crib was filled with concrete to a height of eighteen feet and fifty-two stone blocks for the face of the pier had been set and backed with concrete. The stone facing started four feet below mean high water and extended ten feet above high water, where the top of the pier was paved with small stone blocks. On November 21, work was suspended for the season after the seventh and final course of stone facing blocks had been laid. A temporary shelter was built on the crib, and two men were left in charge of the warning lights until navigation closed on December 12, 1884.

The warning lights were re-established on April 18, 1885, but poor weather prevented work on the pier from resuming until May. Stone ballast, which weighed 550 tons and had been placed atop the pier the previous fall to help it settle, was first removed and placed about the crib as riprap. After the top of the pier was paved, work began on the light and fog signal structures. The cast-iron tower topped by a fourth-order lantern room is a modification of one designed by the engineer of the third lighthouse district and was manufactured by the Russell Wheel and Foundry Company of Detroit, Michigan, who submitted the lowest bid for the work of $7,450. The tower was placed on the southern end of the pier atop a brick cellar that had a diameter of sixteen feet and a depth of seven feet. The bottom three stories of the tower were lined with brick to form rooms with a diameter of eighteen feet to serve as living space for the stations three keepers, while the fourth story and watchroom were lined with wood. A revolving fourth-order Fresnel lens mounted in the decagonal lantern room produced a fixed white light for one minute followed the next minute by six flashes, spaced by ten seconds. The light had a focal plane of forty-five feet above the deck and fifty-six feet above the lake.

A twenty-two by thirty-foot fog signal building was placed atop a coal cellar on the north end of the pier. This frame structure was covered with corrugated iron on the outside and plain iron on the inside, while the space between was filled with a mortar made of lime and sawdust. Duplicate ten-inch whistles, powered by a thirty-horsepower locomotive boiler, produced a five-second blast every thirty seconds when necessary. The perimeter of the pier was encircled with a railing made of two-inch, wrought-iron pipe with detachable chain-railings near the piers two boat cranes. A wrought-iron landing-ladder and a boat crane were placed on the southwest and northwest angles of the pier for access.

On August 20, 1885, the temporary lights were discontinued, and the permanent light commenced operation, but even the stations powerful navigational aids couldnt keep all vessels free from incidents on Bar Point. On the night of July 21, 1886, the schooner E. Blake, being towed by the Canadian steam barge Tilley, crashed into the pier at Detroit River Lighthouse, damaging the pier railing and a boat crane to the amount of $377.60. When asked to reimburse this amount, the owner of the barge refused. The matter was transferred to a U.S. district attorney for prosecution, and the sum was finally collected in 1890. In May 1892, the schooner Constitution, in tow of the steamer Oscoda, struck the pier and damaged the railing, but this time the repair bill was promptly paid.

Over time, the fifteen circular windows in the upper levels of the lighthouse started leaking, and they were replaced in 1894 with news ones set in brass frames.

In 1899, the Lighthouse Board noted that no boat landing on the mainland was provided for the station. When keepers went ashore after provisions, they would have to leave their boat on shore, unprotected from weather and thieves, and if bad weather prevented a return to the station, they had nowhere to stay. The Board requested $1,000 for a boathouse, and this amount was approved on June 6, 1900. A roughly one-acre lot was purchased near the mouth of Huron River from the Point Mouille shooting club in 1900 for $350, and a boat house was built on this parcel in 1901. The structure had room for three boats along with a shelter in its upper part where keepers could stay temporarily.

A siren operated by compressed air replaced the steam whistle in June 1905. A new fog signal building was built in 1936 to house a modern heating plant for the entire station and a triplex diaphragm air horn. A radio fog signal had been added to the station on November 3, 1925. In 1936, the radiobeacon received a new transmitter and was synchronized with the new fog signal for distance finding.

The Fresnel lens was removed for repairs in 1906 and replaced with a lens and apparatus that produced a white flash every five seconds. On April 27, 1907, the old lens was returned to the station and its rotation speed was doubled to produce a fixed white light for thirty seconds followed by six flashes, each separated by five seconds. On April 6, 1914, the lights illuminant was changed to incandescent oil vapor, and a new fourth-order lens was installed, changing the signature of the light to group flashing, consisting of a 0.6-second flash, a 1.9-second eclipse, a 0.6-second flash, and a 6.9-second eclipse every ten seconds.

At the request of the Lake Carriers Association, a ten-and-a-half-foot-tall gauge board was placed atop the northeast side of the pier in 1924 to indicate to passing vessels the available depth of water in Detroit River and over Ballards Reef. A copper float suspended inside a steel pipe attached to the side of the pier moved an arrow on the board through a flexible cable and pulleys. A one-foot change in water level in the pipe would move the arrow over a space of two feet on the gauge board. A mirror, mounted on steel brackets, was placed on the east side of the lantern room in such a manner that the light from the lens was reflected downward to illuminate the gauge board.

After originally being painted brown, the tower received an all-white daymark around 1903. The current black-and-white daymark was in use by 1932.

On August 21, 1921, Keeper Harry Keondway and his two assistants rescued six people from a burning yacht and took them to the station until a passing steamer was hailed to transport them to shore.

By 1931, a radiotelephone had been installed at the lighthouse allowing the keepers to communicate with the lighthouse depot in Detroit each morning and afternoon. In this manner, the keepers could be directed to attend to any navigational aids in the locality that had been reported extinguished. The radiotelephone also proved valuable when a young woman visiting one of the keepers was injured while landing at the station in a small boat. A radiotelephone call was sent out requesting anyone who heard the transmission to contact the Coast Guard at Trenton. Several amateur radio operators picked up the message, and a Coast Guard vessel arrived at the station in just over an hour.

Keeper MacDermaids wife Florence would occasionally visit her husband at the station accompanied by Bill and Danny, their two sons, and the boys would even spend the night at the lighthouse for several days during their summer vacation.

Detroit River Lighthouse lost its resident keepers in 1979, following the automation of the station. The second fourth-order Fresnel lens used in the lighthouse is now on display at the Michigan Maritime Museum in South Haven, Michigan.

In December 1997, the 625-foot freighter Buffalo rammed the lighthouse. The crew had apparently set a course for the lighthouse, and then went below decks to read the mail they had just picked up in Detroit. When the crewmember on watch realized they were going to hit the lighthouse, he unsuccessfully tried to contact the wheelhouse, and by the time he made his way aft it was too late. The ship was able to back away from the lighthouse and make its way to Toledo and unload its cargo of coke before heading to a shipyard. Repairs cost approximately $1.2 million, and all the crewmembers on duty at the time of the accident were fired.

In May 2015, Detroit River Lighthouse was declared excess to the needs of the United States Coast Guard and made available to eligible organizations under the provisions of the National Historic Lighthouse Preservation Act of 2000. Qualified entities were given sixty days to submit a letter of interest and were required to obtain a conveyance from the State of Michigan for the bottomlands on which the lighthouse stands. If no suitable organization is found, the lighthouse will be sold at auction.

After no suitable steward was found, Detroit River Lighthouse was placed on the auction block on July 25, 2017. Six bidders participated in the auction, which closed on October 10, 2017 with a high bid of $188,500.

For a larger map of Detroit River Lighthouse, click the lighthouse in the above map.

We chartered a boat from the southern end of Grosse Ile Island, from where the trip to Detroit River Lighthouse was about 6 miles.