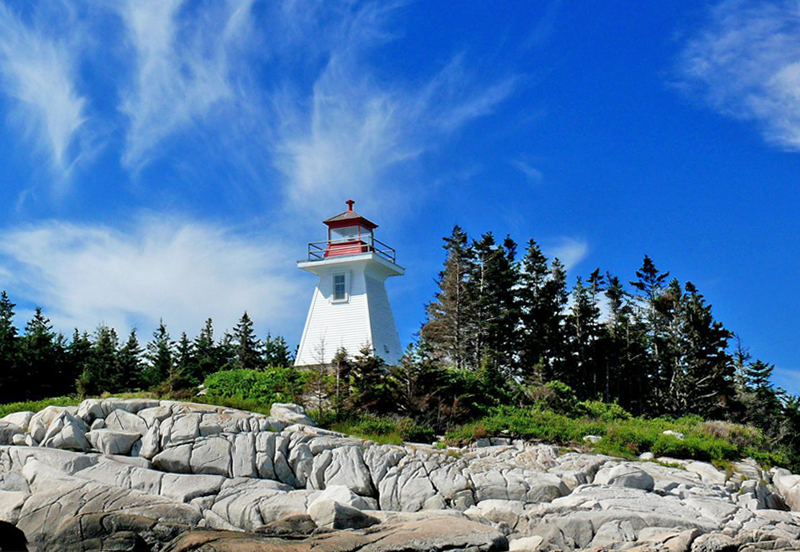 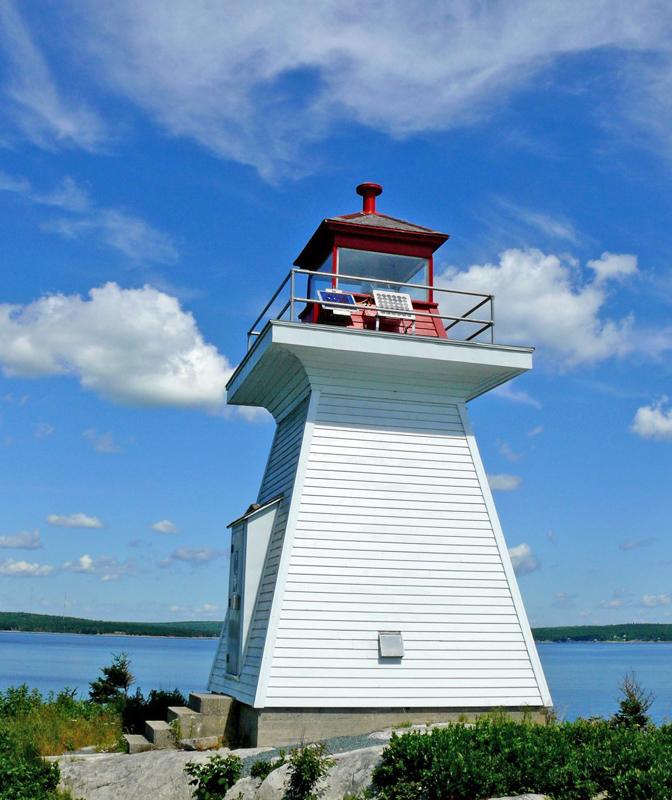 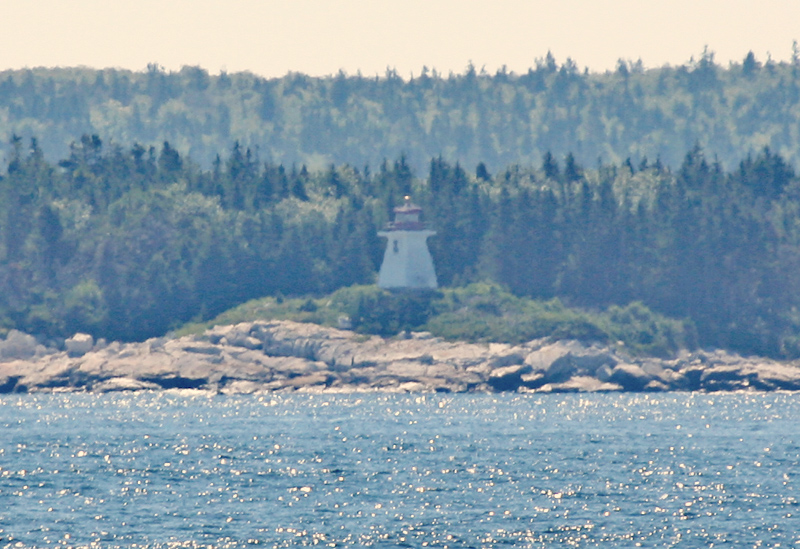 Port Mouton is described as a large and moderately deep indentation between Mouton Head on the south and White Point on the north. On May 13, 1604, the French explorers Pierre Dugua, Sieur de Monts, and Samuel de Champlain landed at Port Mouton and built a temporary camp. The explorers named the village Port Mouton because a sheep (Mouton in French), so excited at seeing land, jumped overboard there and drowned.

Mouton Island lies offshore from the village and forms a breakwater of sorts for the harbour. Mariners can either sail north or south of the island to reach Port Mouton. The preferred entrance is the east channel, which passes north of Mouton Island.

A few smaller islands are found between Mouton Island and Port Mouton. Two of these are Spectacle Islands, which are linked together at low water, and were named due to their resemblance, from above, to a pair of spectacles.

The Annual Report of the Department of Marine for 1873 provides the following information on a lighthouse built on the northern end of the Spectacle Islands:

Port Mouton Light, for the purpose of guiding vessels into the harbor of that name, is situated on the northeast point of Spectacle island, Queens County, and shews a fixed red light, elevated forty-seven feet above high water. The tower, which is painted white, is a square wooden structure, twenty feet high, and was erected by Mr. G. S. Parker for the contract price of $665. The light was put in operation on the 1st September, 1873, and is under the temporary charge of Mr. Patrick Burgess, who receives $2 per day.

The total cost of the lighthouse came to $1,375.25, which included the purchase of the catoptric illuminating apparatus. Robert J. Smith was appointed the first permanent keeper of the light on November 11, 1873 at an annual salary of $300.

An iron floor and zinc lining protected the wooden, octagonal lantern room atop the lighthouse from the array of oil-burning lamps and reflectors that made up the illuminating apparatus. The light burned around 250 gallons of oil a year.

A sixteen-by-twenty-foot dwelling was built near to, but detached from, the light tower. In 1874, Keeper Smith requested that a cellar be built beneath the dwelling and an addition made to it. He later grew tired of waiting for the government to improve his living conditions and took matters into his own hands as noted in a report from 1877:

The keeper has, at his own expense, built an addition to the dwelling 14 x 21 feet and 11 feet post. He says he was almost forced to do this, as he had only one room and one bed-room for a family of six. He has now a kitchen, sitting room, pantry and two bed rooms. The cost is stated at $264.59. I think this addition was much required, and although the keeper had no right to build it without orders, I would recommend that he be paid at least for the material, should the work prove satisfactory to the Inspector on his next visit. A further expenditure of about $20 is required for underpinning, as the house now stands on supports.

The industrious Keeper Smith built a landing on the island in 1875 along with an excellent tramway that led from the landing up to the lighthouse. In 1876, he sunk a well at the station, but the water it produced was judged very bad, and a request was made for a cistern to store rainwater.

Lightning struck Port Mouton Lighthouse at 2 p.m. on June 16, 1882, shattering the wooden lantern room and splitting the south wall of the tower from top to bottom. Keeper Smith promptly took measures to display a temporary light until a new lantern room could be sent form Halifax. It was fortunate that the oil, which was likely being stored in the tower, did not catch fire and destroy the entire lighthouse. The lighthouse was repaired soon after the lightning strike, and a separate oil store was built the following year.

Keeper Robert Smith resigned in 1890 and was replaced by Edward McPherson. After heavy seas carried away the wharf at the landing in 1891, a new wharf with a slip and a boathouse was built at a more protected location. Keeper Edward McPherson drowned on May 5, 1892, at the age of forty-six years and seven months. On his tombstone, his family had inscribed: We have laid him away in deep sadness, yet not without hope in our breast. For again he will join us with gladness, and enter the heavenly rest. Anna McPherson took over the role of keeper from her husband and served until 1898, when J. Oscar Campbell assumed charge of the light.

In 1915, a fourth-order Fresnel lens was installed in the lighthouse on Spectacle Island, and the characteristic of the light was changed from fixed red to fixed white. A new keepers dwelling was built in 1922 after fire destroyed the previous one. In 1937, a new lighthouse tower was built on Spectacle Island, and an examination of Light Lists for 1937 and 1938 shows that the height of the new tower was twenty-eight feet, eight feet taller than the original lighthouse.

A hand-operated foghorn had been given to the keeper of Port Mouton Lighthouse in 1906, and he was expected to sound it in response to the signals of vessels in the vicinity during thick weather. A hand-operated signal was still at the lighthouse when Harvey L. Huskins served as the stations final keeper from 1954 to 1961. Keeper Huskins related the following account of using the horn in an interview with Chris Mills:

One night, oh it was foggy! So close to rain. I went out, and I heard a heavy diesel runnin. It sounded like he was goin ahead and goin back. I figure something had ran ashore over towards Summerville, so I ran up to the light, and he blew his horn again. I got the horn out, and I answered him. He kept blowin, and I kept answerin.

I had nothin on. My wife brought me up some clothes, and I stood behind the light answerin that horn. After a while, I said, This is not doin me no good, nor him either. If hes ashore, I cant help him. So Im goin to bed!

So I left and went to bed. In the mornin we come off the island to see what it was. What do you suppose it was?

It wasnt a boat! The railroad ran across Summerville Beach and there was a train goin east that night, and he blew an engine. He called Halifax and another one come up to pick him up, a wrecker. And thats what I was blowin the horn at!

I must have blew that horn three or four hours...too long. Ill tell you! But everybody got a good laugh out of it, anyway!

By the 1990s, Port Mouton Lighthouse was showing signs of deterioration. When local residents learned in 2004 that the Coast Guard might demolish the tower, they rallied to save the lighthouse. As a result of their efforts, the tower was spared and even extensively repaired in 2005. Interested residents eventually formed the Spectacle Light Society to care for the lighthouse and work towards gaining ownership.

Through the efforts of the society, the tower was declared a heritage lighthouse on February 2, 2015. Spectacle Light Society finally gained ownership of the lighthouse in late 2015. Along with ownership came a $43,000 federal grant to help the society care for the lighthouse going forward.

The society entered the lighthouse in This Lighthouse Matters, a crowdfunding competition sponsored by National Trust for Canada and the Nova Scotia Lighthouse Preservation Society in 2015. Twenty-six lighthouses in Nova Scotia competed for online votes in three different categories: High Tide, Ebb Tide, and Low Tide. The top three vote-getters in each category were given monetary awards that totaled $250,000. Port Mouton Lighthouse didnt secure enough votes to win any prize money, but it did earn $530 in the fundraising portion of the competition, where every donation to those lighthouses that didnt win a cash prize was matched, dollar-for-dollar, up to $10,000.

Using a portion of the funds they had secure, the society installed a floating dock at the island in 2016 to improve access.

For a larger map of Port Mouton Lighthouse, click the lighthouse in the above map.

A distant view of the lighthouse is possible from Route 3 between Summerville and Hunts Point.