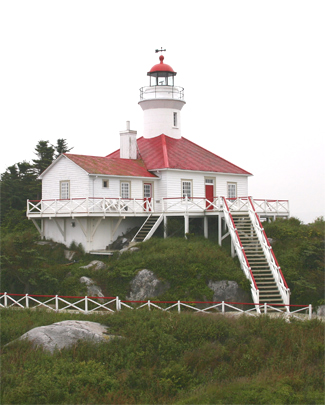 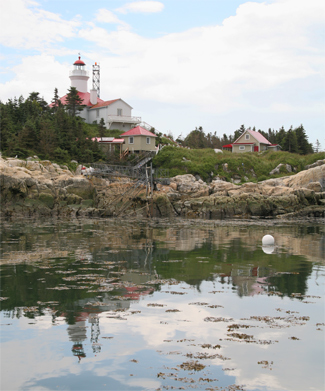 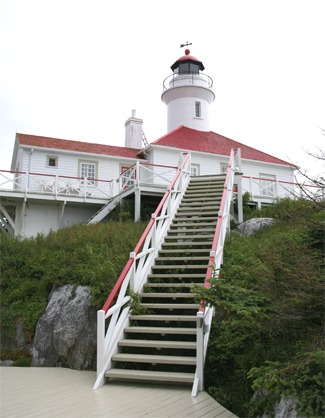 Offshore from Riviére-du-Loup and part of the Saguenay-St. Lawrence Marine Park, the Pot a lEau-de-Vieu Archipelago consists of three small islands which link up at low tide: Gros Pot (Big Pot), Petit Pot (Small Pot), and Pot du Phare (Lighthouse Pot). The name of the archipelago came about during French rule when sailors likened the reddish-brown rainwater collected in pockets on the rocky islands to brandy, and the shape of those pockets to brandy pots. Legend also suggests that Prohibition bootleggers hid alcohol in an area on the north shore of Gros Pot, hidden from view, now called le trou de la contrebande (the contraband hole-in-the-wall). Due to the calm currents in the area, merchant ships would often gather at the Brandy Pots to form convoys. In 1740, the Royal vessel, Rubis, was forced to land on the island when 160 people on board came down with fevers and the crew was too weak to operate the ship. Captain M. de la Saussaye sent a boat on to Quebec City requesting help to continue the journey. Forty-seven people later died at the Hotel-Dieu Hospital in Quebec City, including the recently appointed Bishop of Quebec.

The barque Endeavour also made an unscheduled stop at the islands when it shipwrecked there in late November 1835. Captain Lachance lit a signal fire on the islands highest point, where it was eventually seen by Riviére-du-Loup river pilot, Joseph Pelletier. Pelletier organized a rescue team of eight men, with two canoes, who paddled the twelve miles in freezing conditions. By the time they arrived, fourteen men had perished from starvation and exposure, but Pelletier received a a gold medal from the merchants of Quebec for rescuing the fifteen others.

Almost thirty years later, in 1862, another signal fire was lit on the archipelago: the Pot a lEau-de-Vie Lighthouse.

Designed by John Page and constructed under the direction of Louis Déry, the lighthouse, built on the southeastern tip of Pot du Phare, was a twin to the light on lÎle du Long Pélerin (Long Pilgrim Island). The tower and dwelling are combined in the form of a thirty-foot-six-inch square white clapboard structure with a 9.15 metre (30 foot) high cylindrical brick tower rising from the center. The dwellings red roof is built around the tower and slopes down on four sides. In 1884 a rectangular annex, used as a storehouse and summer kitchen, was added to the lighthouse. The station's wooden oil shed was also painted white with a red roof.

A fixed white light was exhibited from a fourth-order Fresnel lens, installed in the towers lantern room that had a diameter of five feet ten inches and was fitted with panes of glass measuring 43 x 28 1/2 x 1/2 inches. The mammoth flat-wick lamp used inside the lens consumed roughly seventy gallons of oil per season.

The Pot a lEau-de-Vie Lightstation never had a fog alarm. The channel in the vicinity is narrow and surrounded by shoals, and in thick fog, heavy draught vessels could not go through it with any degree of safety. Rather, they were compelled to anchor near the approaches to the channel and wait for visibility to improve. Given the configuration of the land near the lighthouse, the Department of Marine thought that a fog alarm would be subject to so many varieties of reflection and sound shadows from unequal heating of the atmosphere in patches, that its action could neither be foretold nor depended upon, and it would be extremely difficult to locate the sound, as we have found at other fog-alarm stations where there were outlying shoals.

The first keeper of the light was Jean-Baptiste des Trois Maisons dit Picart, who had previously operated a small hotel and supply station on Gros Pot for river pilots and mariners. The lighthouse was active for just over a century, and during this time it was primarily under the care of two families: the Richard family from 1874 to 1914, and the Dubé family from 1920 to 1964.

Roger Dubé was serving as keeper when the light was automated in 1964. In 1975, a light atop a forty-one-foot (12.5-metre) square steel skeletal tower took over the role of the lighthouse, and in 1978 the lens was removed from atop the lighthouse and its lantern room was removed as it blocked the light on the modern tower. The current yellow light flashes once every two seconds at a focal plane of 119 feet (36 metres).

In 1979, a handful of biologists united to preserve the ecological richness of the Lower St. Lawrence Islands. Under the direction of Université Laval biologist Jean Bédard, they founded the nonprofit organization, Société Duvetnor Ltée. Bédard had come to love the region in the early 1970s, when he was studying the unusual eider behaviour of crèche formation, where an extended family of ducklings and females from different nests spontaneously come together under threat of a predator.

Société Duvetnor Ltée soon purchased Les Pèlerins Archipelago and several small islands and then, in 1986, Île aux Lièvres. Duvetnor obtained a lease for the Pot a lEau-de-Vieu Lighthouse, and in 1989 renovated the structure using historic photographs and John Pages original architectural plans. On August 20, 1989, a newly fabricated copper lantern room was hoisted atop the tower, restoring some dignity to the neglected structure. That same year the society opened up Île aux Lièvres and Pot du Phare to visitors.

Duvetnor raised funds to restore and maintain the lighthouse using a novel idea proposed by Bédard. Employees would collect eiderdown by hand from 12,000 nests on the local islands during a two-week sweep each spring, and the prized down would then be cleaned and sold in Europe for manufacturing comforters and clothing. The first year the society was formed, $10,000 worth of down was gathered, and this amount was doubled the following year. In 2007, the group sold seventy kilograms of down.

Îles du Pot à lEau-de-Vie are uninhabited, apart from birds and seals, but visitors can spend the night at the lighthouse, a Recognized Federal Heritage Building, and climb the thirty-one steps of the beautifully restored spiral wooden staircase to the top of the tower to see for themselves the region that captivated Bédard.

For a larger map of Pot à l'Eau-de-Vie (Brandy Pot) Lighthouse, click the lighthouse in the above map.

The lighthouse is run as a bed and breakfast with three bedrooms by La Société Duvetnor Ltée. During the summer, the society also offers daily cruises that pass by the lighthouse or allow you to land. The cruises depart from the ferry dock at Rivière-du-Loup. A distant view of the lighthouse can be had from the Rivière-du-Loup - Saint-Siméon Ferry. A Fresnel lens, formerly used on Brandy Pot, is on display in the lighthouse.


We visited Brandy Pot Lighthouse on a tour with Duvetnor. On the way out to the islands, we passed several belugas, which seem to be quite common in these waters. The sun was shining as we approached the Brandy Pot Islands, but by the time we made it up to the lighthouse, it had clouded over and started to rain. Our tour guides were two college students, who fortunately for us, spoke very good English. After visiting the inside of the lighthouse and climbing to the top of the tower, we walked over to a covered area that had several informational panels on the lighthouse and were treated to hot drinks and sweets prepared by the couple who provide the meals for those staying overnight at the lighthouse. On our way back to Rivière-du-Loup, our captain took us by Small Pot Island where we enjoyed an amazing view (accompanied by lots of squawking and a very strong odor) of hundreds of razorbills, gulls, and guillemots.