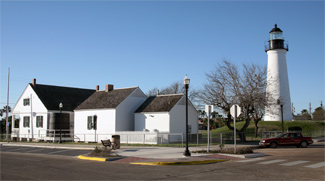 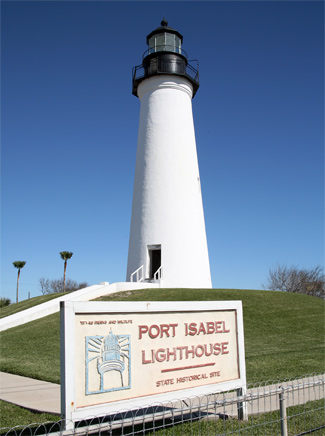 The Rio Grande serves as the border between Mexico and Texas for over 900 miles and would seem to be an ideal waterway for transporting goods to and from interior communities. Its shallowness, however, limits river traffic to smaller vessels. In the past, larger ships would call at the port just north of the rivers mouth, where commerce could be transferred to craft fit for the river. Early on, the area around the port was known as Brazos Santiago, but the name was changed to Port Isabel in the 1920s. To reach the port, vessels entered Laguna Madre through Brazos Santiago Pass, a narrow opening between Padre Island and Brazos Island. Three buoys were used to mark the pass in 1846, shortly after Texas became part of the United States, but Texans wanted a full-fledged lighthouse for their southernmost port. In 1850, the Texan representatives to Congress were successful in obtaining $15,000 for constructing a lighthouse.

The southern end of Padre Island and Point Isabel, a prominent bluff on the mainland, were both suggested as sites for the lighthouse. Local mariners favored Point Isabel, arguing that the island was subject to flooding and that a lighthouse on the elevated bluff could easily be seen beyond the low-lying, barrier islands.

Before being selected as the location for the lighthouse, Point Isabel had already played an important role in the area. The annexation of Texas by the United States sparked a war with Mexico, who had controlled Texas up until it became a republic in 1835. General Zachary Taylor established Fort Polk at Point Isabel and used it as a base for his military excursions into Mexico. After the war, the government retained the fort at Point Isabel for use by the customs service. The proposed site for the lighthouse was thus seemingly already in the possession of the federal government.

John S. Rhea, the Customs Collector for the port, recommended to Stephen Pleasonton, who oversaw the construction of U.S. lighthouses, that a masonry tower be built using local contractors, writing, The building can be erected at Point Isabel of brick cheaper than any other material owing to the very reduced price of Mexican labour. John E. Garrey of nearby Brownsville was contracted to build the fifty-foot, brick tower. Work began in December 1851, and the tower was nearly complete by September of the following year. The spiral staircase and lantern room were shipped from New York aboard the Brownsville, but it wrecked en route, delaying the completion of the tower until early spring of 1853. Fifteen lamps, backed by twenty-one-inch reflectors were used in the lantern room, and the light was exhibited for the first time on March 20, 1853.

Peter Rouche was the first official keeper of the lighthouse, but his tenure lasted only six months. John H.B. Ham, the second keeper, lived with his family in a structure surplused from the adjacent Fort Polk. After a visit to the site, the Galveston lighthouse inspector declared the dwelling inadequate and successfully petitioned for a new one that was finished in 1855. Two years later, the lighthouse received a third-order Fresnel lens illuminated by a single lamp, which greatly simplified the keepers chores. When Ham died in 1860, his wife Hannah, who had been serving as assistant keeper, assumed the role of head keeper and served until the tower was deactivated during the War Between the States.

After the lens was removed from the tower, Confederate soldiers used it as a lookout for monitoring the movements of Union forces. In May 1863, a Union ship entered the harbor to engage blockade-running vessels. The Confederates exploded a charge inside the lighthouse, blowing out the glass in the lantern room, but the Union forces did not try to occupy the port. Five months later, they returned with an invading force, and the retreating Confederates again exploded powder in the tower. This time they succeeded in causing more damage. The towers door was blown off, the brickwork was cracked, and the clockwork mechanism for revolving the lens was damaged.

With control of the port, Union officers petitioned the Lighthouse Board to repair the tower and return it to service, but due to the ongoing war, years passed before the repairs could be accomplished. The lighthouse was finally reactivated on February 22, 1866, with Benjamin Bergreen as its new keeper.

The lantern on this tower is in a dilapidated condition, and should be renewed. During a rain it is impossible to keep the lens and lamps dry, as the lantern leaks in every direction. It has been found impossible to repair it without taking down the lantern and removing every piece of iron used in its construction. The building is a very old one. The brick-work of the tower is in good condition. It is recommended that the lantern be taken down, and the tower be provided with a new and improved lantern and an iron gallery at the watch-room floor; thereby adding to the efficiency of this important aid to navigation in the West Gulf.

A new lantern room was installed in 1881.

In March 1886, James B. Wells of Brownsville notified the Lighthouse Board that he was the rightful owner of the property on which Point Isabel Lighthouse stood. He elevated his claim the following year by suing the lighthouse keeper for trespassing. The federal government never had secured a title for the property since occupying the point during the War with Mexico. Rather than paying the owner for the property, the Lighthouse Board decided Brazos Santiago Lighthouse alone was sufficient for navigation in the area, and Point Isabel Lighthouse was discontinued on May 15, 1888. Vociferous demands by the local population and politicians calling for the restoration of the light eventually persuaded Congress to allocate funds to acquire the property. The owner settled for a purchase price of $5,000, and the lighthouse sent forth its beams of light again in July 1895.

The light served for an additional decade, during which time a brick oil house was built at the station and a railway linking Corpus Christi and the Mexican interior was completed. The railroad diverted much of the shipping traffic away from Brazos Santiago, and in 1905, the tower was decommissioned and its lens was shipped to Mobile, Alabama. The Lighthouse Board retained the property for two more decades, until an economic renaissance in the area prompted several individuals to attempt to acquire the lighthouse reservation. District Lighthouse Superintendent E.S. Lanphier recommended in July 1927 that the lighthouse be sold as he felt it would be a constant source of annoyance from everyone who thinks that a profit can be made by the acquisition of the site. The property was subsequently sold to J.S. Ford of Brownsville for $2,760. Two months later, the Port Isabel Town Company purchased the lighthouse from Ford for $5,000 and used it to promote the recently renamed city.

The bluff surrounding the tower was lowered to form level city blocks, leaving the lighthouse perched on a small mound. The town promoters went bankrupt during the depression, and the structure fell into disrepair. The state eventually stepped in to save the lighthouse, accepting the property from Lon C. Hill and allocating twenty-five thousand dollars for repairs and maintenance. The dedication and formal opening of the park was held on April 26, 1952, during the towers centennial year. On January 27, 1955, the lighthouse returned to operation as a private aid to navigation.

Today, the square block encompassing the lighthouse is Texas smallest state park: Port Isabel Lighthouse State Historical Park. The lighthouse was fully restored in 2000, when a replica of the keepers dwelling was built to house an interpretive display and the offices of the Port Isabel Chamber of Commerce. The lighthouse closed for a planned three-month-long renovation in October 2016, but did not re-open to the public until January 2, 2018. The Texas Parks and Wildlife Department spent over $600,000 to replace railing, repair the exterior, and make improvements to the adjacent keepers dwelling. Visitors can now access the catwalk around the lantern room that had been closed due to safety issues since 2014.

In 2022, Dan Spinella of ArtWorks Florida installed a replica revolving third-order Fresnel lens in the lantern room of Point Isabel Lighthouse. The project, which also includes a pedestal and lamp, was funded by The Texas Historical Commission. A relighting of the lighthouse, which had been inactive for 117 years, was held on December 9, 2022.

Point Isabel Lighthouse is the only lighthouse in Texas open for climbing, and the panoramic views of Laguna Madre and South Padre Island are well worth the small admission fee and the minor exertion required to surmount the tower.

For a larger map of Point (Port) Isabel Lighthouse, click the lighthouse in the above map.

Take Highway 100 into Port Isabel. The lighthouse is located alongside Highway 100 just before the causeway leading to South Padre Island.

Port Isabel Lighthouse is the only lighthouse in Texas open to the public. The lighthouse is open daily, 9 a.m. to 5 p.m. Call (956) 943-7602 for more information. We learned from experience that you must start to climb the tower 30 minutes before the lighthouse closes.

The lighthouse is owned by Texas Parks and Wildlife. Grounds/tower open.


Since 2005, movies have been projected on the lighthouse during the summer months and at Halloween. In 2013, the movies were shown on Friday evenings in June and July.


We visited this at night and returned the next day to see the light "in the light" as well as take a tour of the complex when it was open. Pretty awesome to visit in all kinds of light!