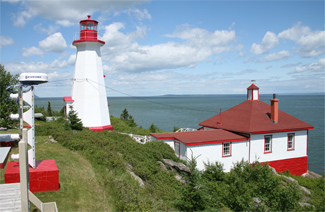 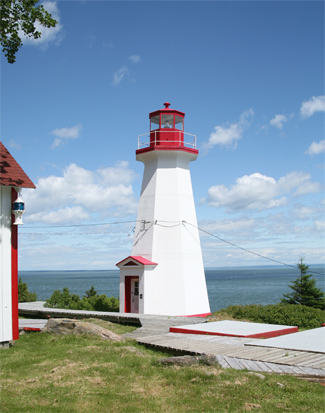 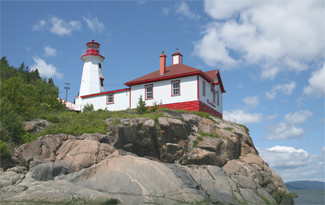 Thirteen-kilometre-long Île aux Lièvres (Hare Island) lies roughly midstream in the St. Lawrence River, forcing mariners to choose either the channel north or south of the island. In 1862, Pot à lEau-de-Vie (Brandy Pot) Lighthouse and Long Pèlerin (Long Pilgrim) Lighthouse were established to guide mariners through the south channel. Brandy Pot Lighthouse was located on an islet off the east side of Hare Island, while Long Pilgrim was situated farther south and marked the east side of the channel. William P. Anderson, Chief Engineer of the Marine Department, toured the lighthouses along the St. Lawrence in 1890 and noted that pilots had shown a remarkable disinclination to use the clear channel north of Hare Island due to its greater current and its lack of good anchorages. Masters of seagoing ships, however, favoured the north channel, and Anderson recommended that a light be established near the north end of Hare Island and on Cap au Saumon (Cape Salmon) to mark, respectively, the east and west ends of the channel.

In 1893, a lightship, formerly stationed of Manicouagan Shoal, was reassigned to mark White Island Reef, just north of Hare Island, and the following year Cap au Saumon Lighthouse and Fog Alarm commenced operation atop a steep cliff at La Pointe de Roches. Jean Morrays bid of $3,700 was the lowest submitted to build the stations buildings. Starting in the spring of 1894, Morray constructed a fog alarm building close to the face of the cliff, with a combination lighthouse and dwelling just behind it. The square light tower rose from the middle of the southeast face of the dwelling to a height of forty-six feet. The lighting apparatus installed in the towers iron lantern produced a white flash every fifteen seconds and was first activated on September 15, 1894.

The fog alarm, sounded by compressed air produced by a steam engine, gave an eight-second blast in each thirty seconds when necessary. A large well was dug in the rocks to collect surface water for the steam foghorn, and the alarm machinery was installed in duplicate so that if a horn or boiler became inoperative, another might quickly be put in operation. A type F diaphone, which sounded a group of three blasts each minute, replaced the steam foghorn in 1917.

The original wooden lighthouse was replaced in 1955 by the current one, a white octagonal tower, forty-six-feet-tall and topped with a red lantern. The lighthouse is a sister to Cap-de-Bon-Desir, Cap dEspoir, and Cap-Gaspe and has a signature of three white flashes every fifteen seconds. The rocky perch on which the lighthouse rests gives the tower a focal plane of eighty-two feet.

The keepers stationed at Cap au Saumon lead a fairly isolated life, as land access to the station was over a very steep road, and rough weather frequently prohibited access by sea.

A semaphore and telegraph were located at the station, and the keeper was responsible for monitoring the river traffic and notifying Quebec of incoming vessels. After World War II, the semaphore and telegraph were replaced by a telephone and radiotelephone, with the keepers still tracking all river traffic. Neil Carré, who grew up on the station, remembered, everywhere you went you had to take a pencil, paper, and binoculars to take down the name of each vessel and the time it passed and report it to Quebec City . . . this was real work, and thats what didnt pay. The keeper was paid $200 a year for this extra service. The signal service was discontinued in 1965, when it was taken over by another Coast Guard division.

The light was automated in 1980, but Cap au Saumon has another type of keeper today. Peter Noreau, a captain with Air Canada, visited and fell in love with the light as a boy. When he learned that station had been abandoned and fallen into disrepair, he formed Corporation du Phare de Cap-au-Saumon in July 2003 and worked out a lease with government. He has spent nine years and significant funds restoring and maintaining the property and hopes someday he and his wife can spend their summers there.

For a larger map of Cap au Saumon (Cape Salmon) Lighthouse, click the lighthouse in the above map.

Cap au Samon Lighthouse can be reached by hiking a two-rut rocky dirt road that starts just east of a large old metal chicken coop on QC-138 near Port-au-Persil. A fair distance down the road is this gate that indicates access is prohibited without authorization, so you must first obtain permission to visit the lighthouse. The hike, which is roughly 3.2 km (2 miles) one way, has portions that are very steep. You should be in good condition to do the hike and bring along water. A distant view of the lighthouse is also possible from the Rivière-du-Loup - Saint-Siméon Ferry.

One of the keeper's dwellings can be rented for one-week periods during the summer. For more information, call 1-888-459-5002.

The lighthouse is owned by the Canadian Coast Guard. Grounds open by permission, tower closed.