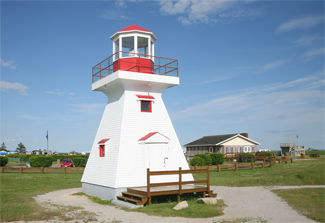 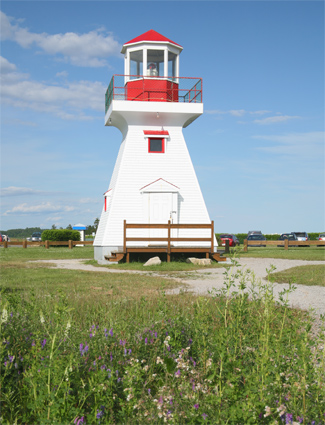 Jacque Cartier sailed into Chaleur Bay in July 1534 searching for a direct route to India. On July 9, 1534 he and his crew reached a place in the bay named Tragadigache by the Mi'kmaq meaning place of herons. A large lagoon along the shore is protected by two sandy peninsulas, and on Pointe Tragadigache, the tip of the eastern one, stands the quaint Carleton Lighthouse.

The nearby town, originally named Tragadigache by the Acadians, was renamed in 1787 after General Guy Carleton, the governor of Quebec.

Work on a wooden lighthouse and keepers dwelling began on the point in 1871 to guide fisherman and ships to the end of the bay. Three mammoth flat-wick lamps set in eighteen-inch reflectors were initially used in the lantern room to produce a red light that could be seen for about twelve miles. Elmire Landry was hired as keeper, and he exhibited the light for the first time on June 1, 1872. Landry originally received an annual salary of $200, but it was raised to $300 in 1873, "as the sum formerly allowed was found to be too small for the service he was required to perform."

The lighthouse, which measured twenty-eight feet from its base to the weather vane atop its lantern room and tapered from being twelve feet square to seven feet at the lantern, doubled as the keeper's dwelling. The tower was painted white with a red roof, and a wooden oil sore, painted red, stood nearby. A foghorn was added in 1900.

In 1906, a wooden lighthouse was built in Quebec and shipped to Carleton, where it was mounted on the wharf to help lead the fishermen home. This tower, which stood twenty-one feet high, was also square in plan, with sloping sides, and was surmounted by a square, wooden lantern. A fixed red dioptric light of the sixth order was displayed from this lighthouse.

The lighthouse on Pointe Tragadigache was replaced in 1911 by a white square pyramidal wooden tower with red trim built on a cement foundation and topped with a red octagonal lantern. All together it stood thirty-two feet (10 metres) tall. Two windows opened on the south and east sides. A keepers dwelling was not constructed, but the tower contained a heated shelter where the keeper could take refuge from the storms. The new tower exhibited a fixed white light, which was changed to a flashing light in 1913. The light became green in 1953 and red in 1956.

The community, missing the wooden lighthouse, built a replica lighthouse at Pointe Tragadigache in 1984. This tower exhibits a red flash every five seconds.

For a larger map of Carleton Lighthouse, click the lighthouse in the above map.

From QC 132on the eastern side of Carleton, turn south on Avenue du Phare and continue 2.6 km (1.6 miles), passing Camping Carleton-sur-Mer, to a parking lot at the tip of the peninsula from where it is a short walk to the lighthouse.