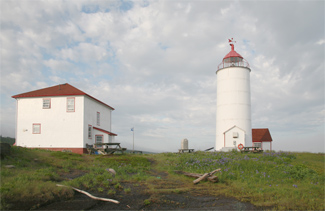 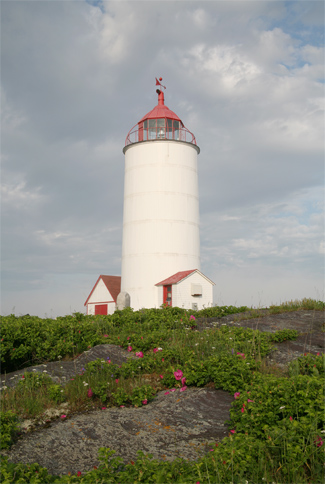 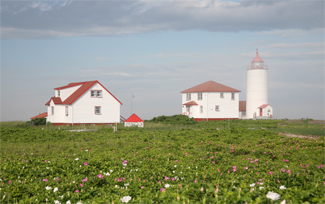 Located three miles from the southern shore of the St. Lawrence River, Île Verte is a green, crescent-shaped island. Long foreshore flats that dry at high tide, strong currents where the Saguenay River meets the Saint Lawrence River, and frequent summer fog all contribute to make the area around Île Verte quite dangerous for mariners. Also along Île Vertes northeast shore are an abundance of reefs and shoals called the Recifs de Île Verte and nicknamed Les Couillions - The Idiots. With all these dangers, it isnt surprising that since 1750 there have been more than fifty marine tragedies near the island. Around 1800, the maritime community began petitioning for a lighthouse to mark this treacherous spot. Their pleas were answered when Edward Cannon, a master mason of the city of Québec, commenced construction of Île Verte Lighthouse in 1806. Completed in 1809, it was the first lighthouse to grace the St. Lawrence River, and is now the third oldest surviving lighthouse in Canada, after Sambro, near Halifax (1759), and Gibraltar Point on Toronto Island (1808). Île Verte Lighthouse remained the only light on the St. Lawrence River until 1830 and was designated a National Historic Site of Canada in 1974.

Built on a rocky outcropping along the northeast shore of Île Verte, the lighthouse consists of a fifty-six-foot (17-metre) octagonal stone tower capped with a twelve-sided red lantern room. (Wooden siding was applied to the tower around 1850 to protect the stonework and now gives the tower a cylindrical shape.) The lights current signature, a white flash every five seconds, can be seen for up to nineteen miles. The first lighting apparatus was a set of thirteen lamps and reflectors that used porpoise, seal, and fish oil, until kerosene was substituted in 1865. During snowstorms and heavy periods of fog, a nine-pounder cannon was fired every thirty minutes.

The original keepers dwelling measured twenty-one by twenty-five feet, and Charles Hembleton, the first keeper of the lighthouse, squeezed into the small space with the ten members of his family. After several requests to have the house enlarged, Hembleton decided to do the job himself and was reimbursed for two-thirds of the cost. Robert Noel Lindsay, a twenty-seven-year-old apprentice pilot and sailor of Scottish descent from Quebec City, became keeper in 1827 after Hembletons passing, and a new dwelling, connected to the tower via a summer kitchen, was built in 1830.

According to the following, written in 1831, Keeper Lindsay was not too impressed with the new dwelling:

I will begin with the roof of the house. It is badly constructed . . . the dormers, as well as the roofing around them, have let in much water this autumn. . . the fireplace smokes excessively . . . . and water comes in between the porch and the house. The passageway joining the house to the tower leaks where it joins both the house and the tower.

This keepers house was torn down in 1960, and replaced with a new keepers dwelling and a second house for the assistant. Both structures now function as a bed & breakfast.

On September 28, 1831, the brig Acadia, bound from Dublin to Quebec, wrecked on Île Verte, reportedly the victim of a drunken pilot. As the lighthouse was the only habitation in the area, Keeper Lindsay, from feelings of humanity, and a sense of duty he owed to his fellow creatures, exerted himself in affording every assistance in his power to the unfortunate sufferers who were thus cast away in a most destitute condition. Later that year, Lindsay petitioned the government for £ 15, stating that he would not think of claiming any indemnity for his losses were his means adequate to support them, but having a young family to bring up, and only his Salary to live upon, he had no other choice.

We, the undersigned Passengers of the Brig Acadia, cannot but express our approbation of Mr. Lindsays conduct on the twenty eighth September last, who with great promptitude and ability, attended with no small degree of personal risk, assisted in saving the lives and property of the unhappy sufferers cast away on the Island; nor can we sufficiently praise his humane attention to their distresses, in providing for the support and comfort of not less than Two hundred and fifty souls during their stay on the Island, at great inconvenience and loss to himself and family. We therefore indulge the fond hope that the proper authorities will see him indemnified.

In 1835, a daymark was added to the station. Known as Le Blanc and erected about a quarter mile behind the lighthouse, it was a tall wooden structure with horizontal boards bleached with lime. When a sea captain aligned Le Blanc with the lighthouse, he could avoid the eastern end of the foreshore of Île Rouge at the mouth of the Saguenay River. Le Blanc was blown down by a windstorm in 1975, but it was rebuilt in 2009 for the 200th anniversary of the lighthouse.

The stations original nine-pounder cannon was replaced with a thirty-two-pounder in 1882, but after mariners complained of the long interval between firings, a mechanism for firing cotton powder cartridges every twenty minutes was installed in 1894. This mechanism consisted of a counterweighted pole placed atop a metal tripod on top of the fog gun building. The keeper would use a rope to lower the outer end of the pole, to which he would affix an explosive guncotton charge. A fuse in the charge was connected to a wire that ran along the pole and to an electric detonator in the gun shed.

One December night in 1930, Keeper Freddy Lindsay nearly lost his life while firing the fog signal. Freddy forgot to disconnect the dry battery that powered the detonator, so when he hooked up a new cotton powder cartridge it immediately exploded, covering him in blood and woodchips. The present fog alarm building was built on the south side of the tower in 1945 to house a diaphone fog signal. The diaphone was active until the station was automated in 1972.

A new lantern was placed atop the lighthouse in 1897, and a fourth-order lens was installed therein in 1913, changing the lights previously fixed characteristic to ten seconds of light followed by a ten-second eclipse.

When Robert Noel Lindsay became keeper, he started a lightkeeping legacy that would span 137 years and four generations of the Lindsay family. His son, Gilbert, who took over in 1867, was painting the lighthouse cupola, when he fell from the tower and suffered severe injuries, leaving him confined to his bed until his death in 1888. Rene (Irenee) Lindsay, Gilberts son was only sixteen years old when he was appointed keeper on September 25, 1888. Rene served for thirty-nine years before passing the torch to his son Joseph-Alfred (Freddy) in 1927. Freddy retired in 1964, ending the Lindsay legacy, and Armand Lafrance, the last keeper, served until the station was automated in 1972.

Lightkeeping never made one rich, but it did provide a steady income. This advantage kindled envy in some communities as evidenced by the following recollections from the wife of Keeper Freddy Lindsay:

There was jealousy and it made trouble for my husband. And there were some people who tried to make him lose his job, especially at election time, or, like when there was smuggling. They said he had hidden what was known as miquelon  bootleg whiskey. He was supposed to have hidden a boatload of miquelon, a load of the bootleg whiskey that people used to sell in those days. And then the police came  It was real hard on him. And it was just jealousy. It was two people on the island who really wanted his job, and they made that report. But it was all lies.

After much negotiating, the land and all structures at the station, except the lighthouse and fog signal building, were transferred to the town of Notre-Dame-des-Sept-Douleurs in 1983. Green Island Lighthouse Corporation was established in 1996 to manage the site and now runs a bed and breakfast and small museum at the station.

The confluence of the Saguenay River and the St. Lawrence stirs up krill and fish, creating a popular feeding ground for blue whales, belugas, and pilot whales, which can often be see with the naked eye from the top of Île Verte Lighthouse. This is just one of many perks that await guests, who spend the night at Les Maisons du Phare de Lîle Verte.

For a larger map of Île Verte (Green Island) Lighthouse, click the lighthouse in the above map.

Île Verte is accessible by ferry from Notre-Dame-des-Sept-Douleurs. In 2011, the ferry could carry up to six cars besides walk-on passengers.

The two keeper's dwellings on Île Verte operate as a bed and breakfast, Les Maisons du Phare de L'Île Verte, that runs from mid-May to late October. Transportation to and from the ferry landing is provided by the bed and breakfast.


Besides its lighthouse, Île Verte is also known for a flock of sheep that graze on sea grass at low tide. The mutton is served at the Chateau Frontenac in Quebec and is offered at a couple of restaurants on the island. We found it quite tasty.