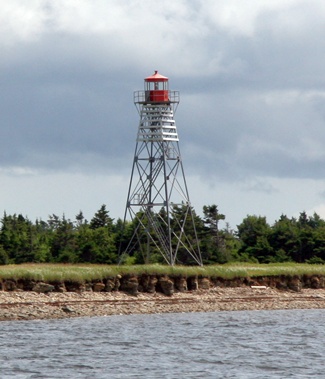 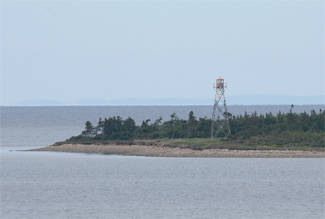 Caraquet Island is a small island, measuring 2.3 km long by roughly 400 metres wide, which parallels the coast near Middle Caraquet and provides protection for Caraquet Harbour. A combination lighthouse and dwelling, consisting of a rectangular, one-and-a-half-story dwelling with a square tower rising from one end of its pitched roof, was erected on the western end of the island in 1870 by Daly and Carter of Miramichi at a cost of $548.

Thomas Kerr, who was appointed keeper at an annual salary of $200, first exhibited the towers fixed white light on August 26, 1870. With an elevation of forty-three feet, the light could be seen in clear weather at a distance of twenty-two kilometres.

Keeper Kerrs first wife, Ellen Young, passed away in 1847, leaving behind six children. The following year, Thomas married Mary Blackhall, and they had ten children, the last of whom, Bertha Eliza, was born after Thomas Kerr became keeper of the lighthouse in 1870 at the age of fifty-seven.

On the night of October 14, 1872, Keeper Kerrs son Archibald, who was single and in his twenty-sixth year, set out for Caraquet Island in a flat accompanied by John Ahern. The following morning, Keeper Kerr found a flat, bottom-up, near the island. Only after crossing over to the mainland that afternoon did Thomas learn that his son had tried to reach the island the previous evening. According to a newspaper account of the accident, Archibald was the fourth son that Thomas had lost in the span of just a few short years. His eldest son, John, had also drowned at sea.

On Friday, June 13th of the following year, Keeper Kerr traveled to the mainland to mail some returns and papers related to the lighthouse. After finishing his business, Thomas set off for the island between three and four-oclock in the afternoon aboard a small leaky flat. The boat, of questionable seaworthiness, overturned, and Keeper Kerr perished. While men were dragging for his body the following day, they located the remains of Archibald, who had drowned eight months earlier in roughly the same location as his father.

Keeper Kerrs wife, Mary, took over responsibility for the light for the remainder of the 1873 shipping season. With the opening of navigation in 1874, Narcisse Porlier started serving as keeper of Carquet Island Lighthouse and was described by Inspector Mitchell that year as a very efficient officer. The inspector visited the lighthouse again in 1875 and noted that four lamps with 15 ½-inch reflectors were used in the lantern room, which had a diameter of 4 ½ feet. This inspection visit fell on a Sunday, when Keeper Porlier was absent attending to his religious duties, but all the required information was provided by his wife. Inspector Mitchell recorded that no government boat was provided to the station, but that it was much required, as this light is on an island, and necessitates having one on account of being such a resort of fishermen. At the time, Keeper Porlier and his wife were living on the island with five children.

In late October 1876, Louis Porlier was appointed keeper in place of his father, Narcisse, who drowned just off the island earlier that month when a gale capsized the boat in which he and another son were fishing. A gratuity of two months salary was awarded to Narcisse Porliers widow, who according to records appears to have been caring for the light even though her son Louis was listed as the official keeper.

In 1885, the illuminating apparatus in use on Caraquet Island was changed to a dioptric light. A storeroom was built at the station and a well was dug that same year.

The original lighthouse was replaced by the present skeletal tower around the 1950s.

Recognizing the predominately francophone population on the Acadian Peninsula, the name of Caraquet Island was officially changed to Île de Caraquet in 2009 by Hédard Albert, Minister of Wellness, Culture and Sport for the Province of New Brunswick.

For a larger map of Caraquet Island Lighthouse, click the lighthouse in the above map.

A distant view of the lighthouse can be had from the mainland, but it is best viewed by boat.